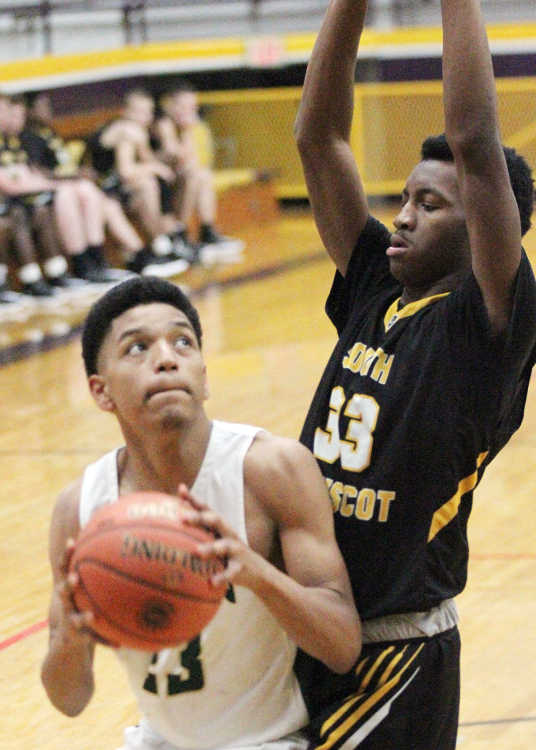 Photo by Dustin Ward, staff
Malden's Sientez Lerma is guarded by South Pemiscot's A.J. Wilbourn in the paint in a consolation semifinal at the Bloomfield Christmas Tournament Saturday afternoon.
Order this photo

BLOOMFIELD, Mo. - The No. 12 seeded South Pemiscot Bulldogs fell behind a few points early but responded with the finish it needed to upset the No. 8 seeded Malden Green Wave in a consolation semifinal at the Bloomfield Christmas Tournament Saturday afternoon.

South Pemiscot rallied from a 19-13 deficit at the end of the first quarter to move ahead 31-26 by halftime and increased its lead as large as 38-28 two minutes into the third quarter.

Malden rallied to move ahead of South Pemiscot 52-50 with 2:28 left in regulation but was unable to hang on for a win. South Pemiscot outscored Malden by four points in the final two minutes of the fourth quarter to escape with a 64-62 victory.

“When you make shots this game is easy,” South Pemiscot coach Bill Tyer said. “We made our shots and finally got ahead. Then we took some bad shots and let them get back in it. But tonight was a great victory for our club.”

Malden junior guard Coy Wade did his best to carry his squad past South Pemiscot in the closing seconds. Wade scored 10 of his team-high 24 points in the fourth quarter.

“Coy Wade came out and tried to will us to victory in every way possible,” Malden coach Cole McBroom said. “The kid played phenomenal. He was unstoppable today. I’m super proud of the player he has become over the last year and a half. He’s shown great maturity.”

South Pemiscot, which made 13 of 18 free throws in the fourth quarter, scored its final 10 points on free throws.

“We got some big rebounds down the stretch and made some clutch free throws,” Tyer said.

South Pemiscot took a 53-52 lead on an old-fashioned three-point play by P.J. Rollings with 2:04 left. The Bulldogs increased its lead to 55-52 a few seconds later when Noah Willingham made a pair of free throws with 1:53 left.

Malden cut the deficit to one point three times after but never caught South Pemiscot again.

Terryon Johnson made one of two free throws with six seconds left to pad South Pemiscot’s lead to 64-59.

Wade hit a 3-pointer shortly before time expired to set the final score.

“We just missed too many shots,” McBroom said. “We shot 50 percent from the line and missed a ton of layups. We are working to improve those things every day but we are going to have to continue to get better moving forward.”

Malden enjoyed a 19-13 after one quarter of play before South Pemiscot outscored Malden by 11 points in the second quarter to move ahead 31-26 by halftime. South Pemiscot opened the second half on a 7-2 run to increase its lead to double digits before Malden made things interesting in the fourth period.

“They won the second quarter and then came out and won the first two or three minutes of the third quarter,” McBroom said. “Good teams find a way to win quarters and get a lead and they really put it on us there for a few minutes.”

Three players scored in double digits for the Bulldogs.

Malden (3-7) is off until Jan. 7 when it plays a conference game at Caruthersville.

“It’s unfortunate we are not playing on the fourth night of this tournament,” McBroom said. “But we will get some rest and days off. Then we are going to come back and get to work. January is always a grind on the coaches and players so we will have to stay focussed. Our conference is no slouch. There is not a bad team in our conference so it will definitely be a grind.”

South Pemiscot improves to 4-4 with the victory. South Pemiscot will play Gideon in the consolation championship Monday at 4 p.m. 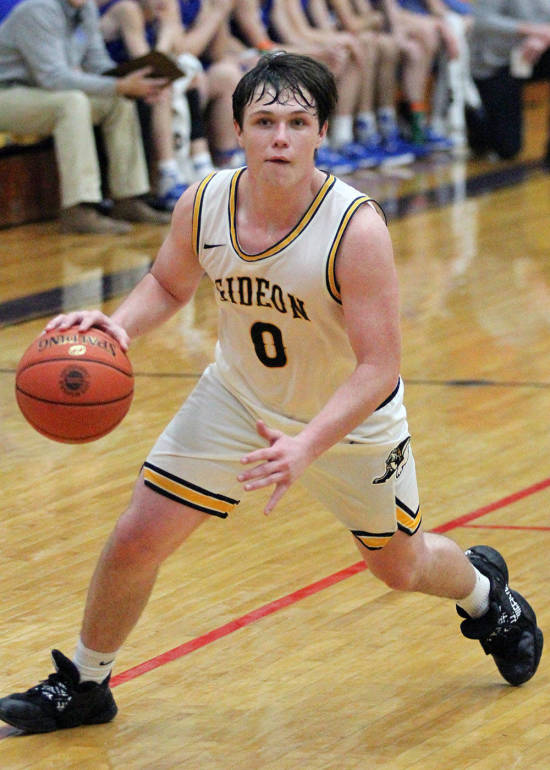 Photo by Dustin Ward, staff
Gideon's Brevin Vires handles in the ball in a consolation semifinal against Twin Rivers at the Bloomfield Christmas Tournament Saturday afternoon.
Order this photo

The No. 10 seeded Gideon Bulldogs jumped out to a 17-9 lead after one quarter of play on its way past the No. 11 seeded Twin Rivers Royals 65-51 in the second fifth-place semifinal.

“Our kids came out ready to play,” Gideon coach Jordan McGowan said. “We rebounded well offensively and got a lot of second-chance opportunities even with the size differential. We also shot it well in spurts. Our guys really wanted this really bad. One of our goals this year was to play all four nights of the Bloomfield Christmas Tournament. They were on a mission today and I’m proud they achieved one of their goals.”

Gideon caught fire from the perimeter in the second half. The Bulldogs hit five of their seven 3-pointers in the third quarter as it padded its lead to 51-40 by the start of the fourth quarter.

“We were dialed in today,” McGowan said. “It was nice to see shots falling.”

Gideon (7-4) will meet South Pemiscot for the first time this season Monday at 4 p.m.

“South Pemiscot plays extremely hard man to man defense,” McGowan said. “We are excited to see what we can do against them. I think we’ve got some guards that can handle the ball so we will see what our guys can do Monday."