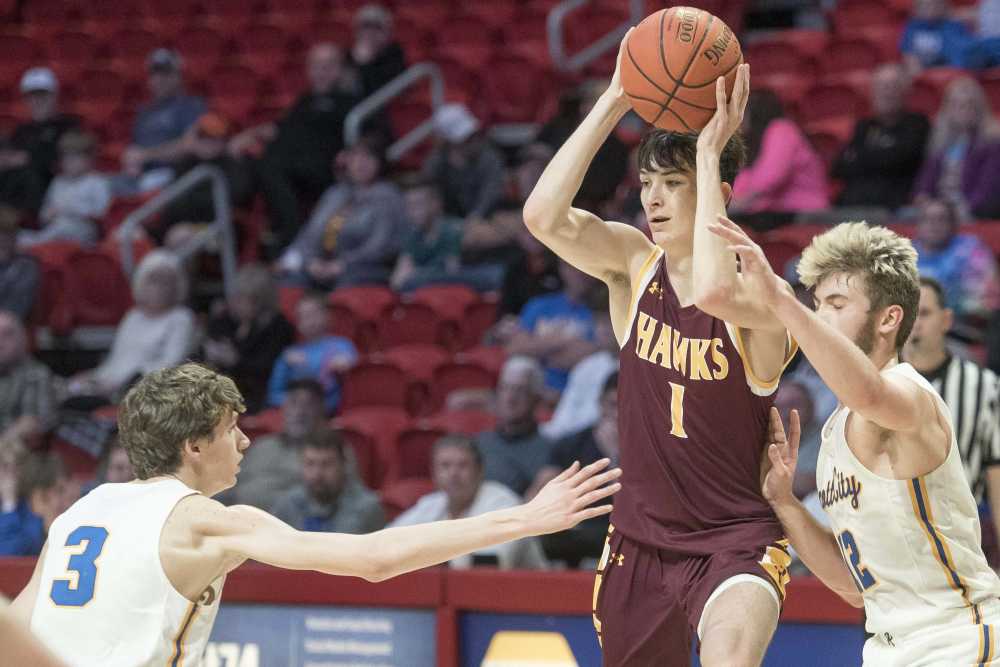 Kelly jumped on Meadow Heights right from the opening tip to start the third day of the Southeast Missourian Christmas Tournament Saturday at the Show Me Center.

The Hawks (8-4) outscored the Panthers 14-3 in the opening quarter and cruised to a 52-37 win in the consolation semifinal.

“Well, in that third quarter, they came out and put a run on us,” Kelly assistant coach Scot Davis said. “That was a little bit alarming to us. We weren’t ready for that.”

Kelly moves on to face the Advance-Leopold winner Monday at 3 p.m. in the consolation championship.

Davis coached the Hawks due to head coach Fred Johnson suffering from dizziness earlier in the day. Johnson was at the arena but stayed in the locker room. He is expected to coach the Hawks Monday.

The Hawks still managed to hang with the Panthers despite the third-quarter rally and held on for a comfortable win.

It was the third game in as many days for both teams and Davis felt his team is handling the workload well.

“Coach Johnson pushes these guys pretty hard,” Davis said. “In our practices, we are constantly running. That is what we’ve done here. We’ve been outpacing teams.”

Meadow Heights (4-4) got 15 points from senior guard Wyatt Lincoln in the loss.

Leopold made a run at Advance in its consolation semifinal Saturday, but the experienced Hornets had an answer and responded with a 10-0 run to hold the pesky Wildcats at bay.

The Wildcats (4-6) pulled to within 23-22 midway through the second quarter after trailing for much of the opening half and Hornet coach Dennis “Bubba” Wheetley called a timeout.

“They weren’t in the spots that they were supposed to be in,” Wheetley said of his offense that had struggled through the quarter. “They had done that for two or three trips down the floor and I wanted to get them in the right spots, settle down and try to do what we wanted them to do.”

The message got through because Advance ran off on a 10-0 run and took a 33-24 lead into the locker room.

Senior guard Jack Below led the Hornets with 28 points, while junior forward Landon Dailey shook off a hit to the face and bloody nose to score 10.

Advance has already faced Kelly earlier in the season and lost 87-84 in overtime. Wheetley was blunt about what his team needed to do better Monday.

“Everything,” Wheetley said of his list of improvements. “We’re still giving up too many drives, too many rebounds, everything.”

Leopold sophomore point guard Caleb Schaab scored just four points Friday after putting up 17 in the tournament opener Thursday. However, he bounced back Saturday with a 30-point effort.

Late in Oran’s game with Scott City Saturday, the Eagles held varying leads of five to eight points, depending on the possession. The margin was never enough to feel confident in an Eagle victory, but Oran never lost the lead either.

“It kind of depends on the comfort level of the game itself with your players and shooting free throws,” veteran Eagle coach Joe Shoemaker said. “I’d like us to handle the ball better than we have in the past and had great free throw shooters, so we ran the clock a little more tonight.”

The Eagles spread the court in the final four minutes of the game and moved the ball at warp speed amid their cuts and pass fakes, all of which kept the Ram defenders in pursuit as the clock ticked away.

“They are a good team,” Shoemaker said. “They gave us fits the first time we played.”

Ram junior guard Camden Conner was on fire in the opening half, as he scored 12 points before halftime. However, the Eagle defense limited him to just six after the break. But as Conner was controlled, Scott City seniors Joe Panagos and Spencer Stratman got hot and scored a combined 23 points in the second half.

“I was never comfortable,” Shoemaker said. “They are so well coached. They are a good team.”

But so is Oran.

The Eagles improved to 8-1 overall and advanced to play Delta (9-2) in the fifth-place game Monday at 4:30 p.m. It will be the first of consecutive games between the Eagles and Bobcats, who also play Jan. 3.

The toughness of the Eagles was impressive, particularly given the fact that Shoemaker’s kids played a difficult 50-48 game with Jackson late Friday.

Senior wing Tyson Goodale paced the Eagles with 20 points, while Cooper Priggel, Langdon Scheeter and Ty Johnson each had 11 in the win.

On the injury front, Oran senior Todd Priggel will have surgery Tuesday on his right foot, which he fractured in a game Thursday.

The first-year Bobcat leader had just witnessed his team – which plays a frenetic style – rally from a double-digit hole in the final quarter to beat Oak Ridge in the final seconds.

The Blue Jays (4-6) had handled the Delta pressure all game and gotten countless lay-ups at the back end of it, as they built a nice margin. However, the Bobcats do what they do, which is press defensively and jack up shots offensively, from the opening tip to the final gun, and that philosophy paid dividends Saturday.

“It gives us an advantage,” Hahn said. “We can turn it on whenever we need to.”

The Bobcats needed to in the final quarter, as Oak Ridge was working its way to a win. Delta’s play began to make an impact and they fought back to outscore Oak Ridge 25-13 over the final eight minutes.

Oak Ridge trailed 69-68 in the final seconds and got looks from Kyran Newell and Zach LeGrand, neither of which could finish. Berry’s free throw sealed the win.

“Whenever we decide to be aggressive,” Hahn said, “and we’re not afraid to fail, it looks really good.”