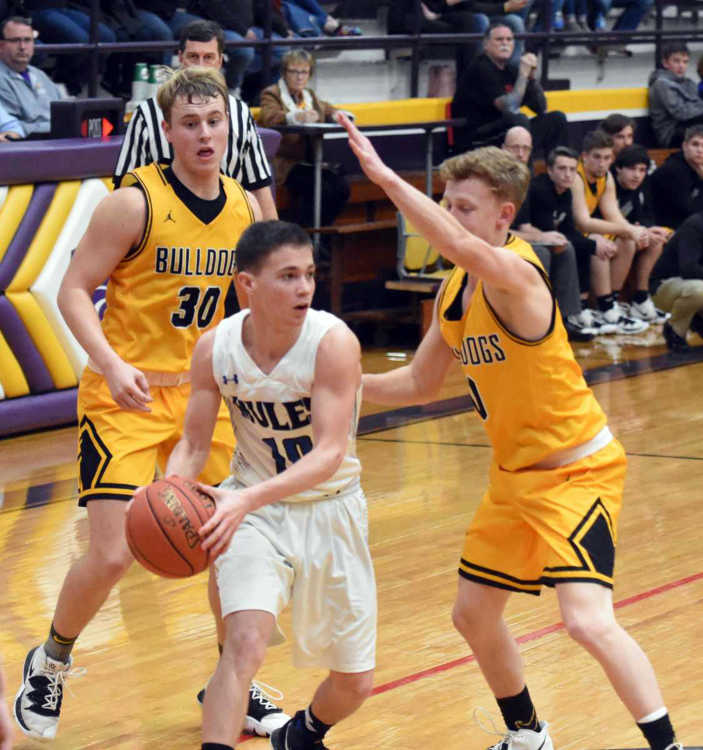 BLOOMFIELD, Mo – For the second-straight day, Bernie entered the fourth quarter Friday with little doubt about whether they would be moving on the next round of the Bloomfield Christmas Tournament.

After holding just a one-point edge over seventh-seeded Van Buren going into the second quarter, the second-seeded Mules extended their lead to 20 by the start of the fourth to roll to a 71-45 final and a spot in the tournament semifinals.

“I didn’t know what to expect,” Bernie head coach Jason Long said. “We’re a mix. We have some experience, but also some youth too. I’m very excited and proud of my kids.”

Six points each from Haden Barnes and Trey Nicholson in the first quarter helped the Bulldogs continuously swap leads with the Mules before heading into the second frame down a point, 18-17.

Barnes opened the second with a basket to again give Van Buren the lead, 19-17, but it wasn’t long before Bernie seized the momentum and never looked back.

A John Nimmo bucket put the Mules back on top for good and ignited a run of six-straight points that grew into a 13-3 run that lasted into the final minute of the half.

A Tristan Johnson basket just one second before the buzzer left Bernie heading int the locker room holding a 33-24 advantage.

“It was a combination of playing better offensively and mixing in some zone trap and just some zone,” Long said of his team’s adjustments. “We were getting beat in man, and these kids haven’t played much of it, so it’s a work in progress.

“We’ve improved just about enough where we like to give it a try, but switching back to zone helped us a bit.”

A strong third quarter left the Mules firmly in control by the start of the fourth, hitting 7 of their first 11 shots of the second half.

Landon Zoll connected on three of his game-high five 3-pointers in the quarter, the last of which started a run of seven-straight points to end the frame.

After opening the fourth with a 55-35 lead, Bernie went ahead by as many 26-points three minutes into the quarter before closing out the 71-45 win.

“We didn’t handle adversity very well tonight,” Bulldogs’ head coach Jacob Black said. “It was a physical game, and we didn’t adjust well. Early we did. I thought we did a good job than executing well.

“Bernie’s a nice team. They’ve been in this situation before, and we’re trying to learn how to get in this position.”

Zoll’s five 3-pointers helped him to a 21-point effort on the night. He has nine threes and a combined 35 points through the first two rounds of the tournament.

Blake Harty was close behind with 19 points, leaving him with 34 points through two rounds. Tyler was the third Mule in double-figures with 13 points.

“We battled and didn’t give in,” Black said. “We were still trying to put pressure on at the end even though we were down 25. I’m proud of them, and we have another game tomorrow.

“Our ultimate goal is to play four days, and that’s what we’re going to try and do.”

Bernie moves on to play third-seeded Dexter today at 8:30 p.m. in the semifinals.