Undersized Oran comes up BIG even in defeat to Jackson 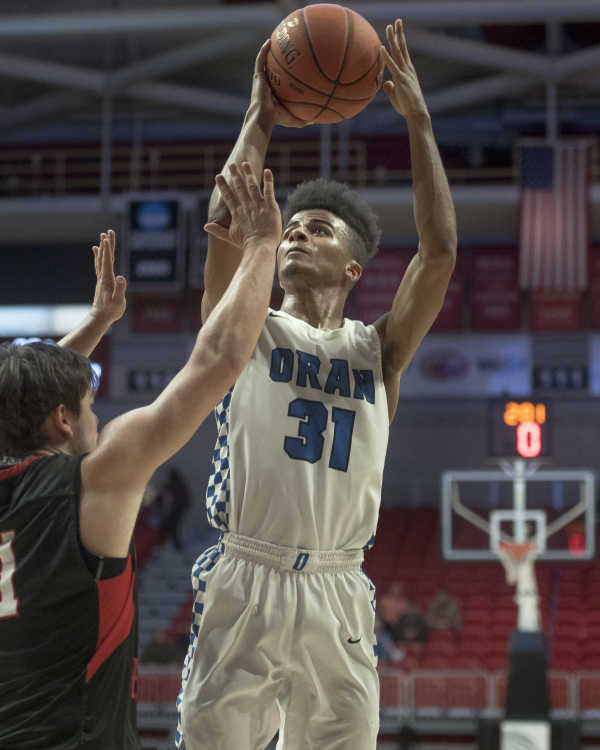 The official scorebook shows that the Jackson boy’s basketball team was the winner of the final game of the second round of the Southeast Missourian Christmas Tournament Friday at the Show Me Center. After all, the Indians did outscore Oran 50-48.

However, the true winners were the 4,767 fans that were in attendance and witnessed not just an exciting game, but an exhibition of beautiful basketball put on by the Eagles.

“They are smart kids,” veteran Jackson coach Darrin Scott said of Oran. “They’re well coached. They play well. They compete hard. They are tough for anybody because they all handle the ball, they can all shoot it, and they all make good decisions.”

This isn’t to take away from No. 4-seed Jackson (5-2), who advances to play No. 1-seed Charleston (7-1) today in the semifinals at 6 p.m. The Indians made a lot of plays to ultimately prevail. However, Jackson had to do everything in its power to get past an Eagle team that was undersized to the nth degree.

The Eagles were without senior Todd Priggel, who watched the game in street clothes and was on crutches with an injured foot suffered Thursday. But the loss of the 6-foot athlete didn’t alter the physical size of Oran, who played five guys of essentially the same size (each right around 6-foot), build (all rail thin) and skill set (all talented basketball players), as Scott noted.

“They have five guys who can all put it on the floor,” Scott said.

What Oran did to Jackson’s 6-foot-5 athletes (Lane Crowden and Nick Wasilewski), 6-foot-8 athlete (Clayton Ernst), and 6-foot-3 athletes (Luke Mirly and Luke Reynolds) was spread the floor and move the ball – and themselves – in a relentless manner.

The Indian defenders’ Fitbits would’ve exploded by the end of the night they spent so much time chasing the Eagle cutters.

“What they do a really good job of is they are aggressive driving it,” Scott said, “and they make good decisions once they drive it. When they drive it, if they don’t have anything, they pull it back out or they kick it to somebody. 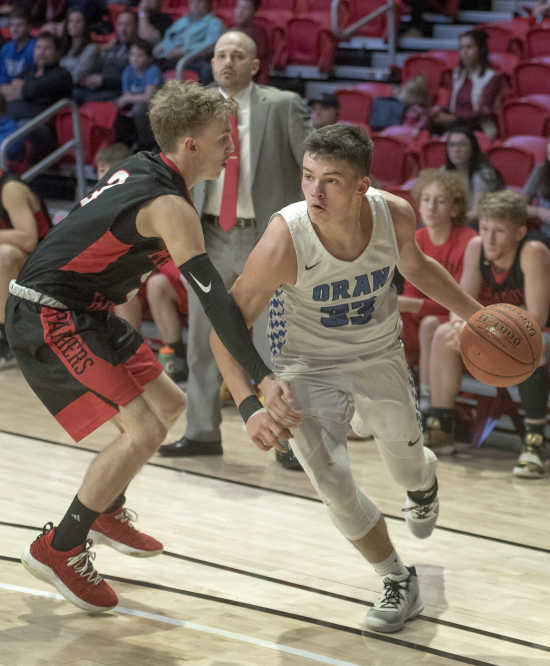 Oran was able to do that and build a lead in the second half, but eventually the physical size and athleticism of Jackson rose to the top – literally.

Twice in the critical final minutes, an Eagle driver took the ball into the paint only to have Wasilewski reject the shot.

Another impressive facet of Oran’s play was the fact that the Eagles battled the longer, stronger, and more athletic Indians on the glass for every shot.

“That is a lot of effort and heart from our guys,” veteran Oran coach Joe Shoemaker said. “We talk about rebounding. We practice it but it comes down to effort and heart.”

One of those Eagle athletes that grabbed his share of boards was 6-foot-1 Tyson Goodale, who paced his team with 20 points, while junior Ty Johnson added 13.

Jackson was led by Wasilewski and Reynolds, who scored 15 and 14 points, respectively.