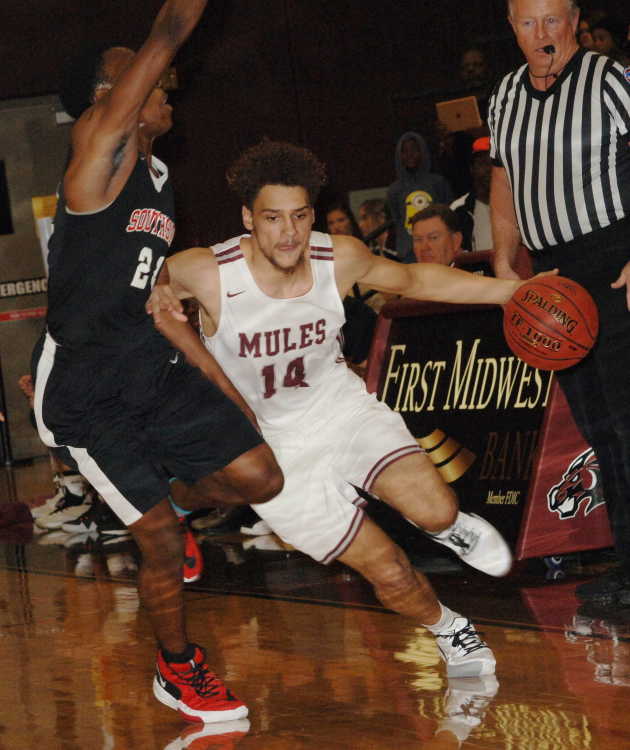 The Jackson Southside Hawks showed the crowd at the 33rd Annual Poplar Bluff Basketball Showdown why they are one of the best high school basketball teams in west Tennessee — and in the process denied the Poplar Bluff Mules a shot at their third Showdown title in a row.

However, the Mules did not go down without a fight, whittling a 20-point third-quarter deficit down to five midway through the fourth quarter before falling 73-60 to the Hawks in the first of two semifinal contests Friday night at the Showdown.

“I thought the kids competed well,” Poplar Bluff coach William Durden said. “They could have packed it in and quit, but they played their hearts out. We lost to a pretty good team."

The Mules trailed 47-27 midway through the third quarter, but closed the period on a 13-4 run to nearly halve the deficit by the beginning of the fourth quarter and gain much-needed momentum.

Gage Rivers’ basket with 4:22 left in the third ignited a 7-0 run capped by a Joseph Hardimon basket 45 seconds later that made it a 49-36 game. A Chance Campbell layup and another bucket by Hardimon were sandwiched around a Jailen Anderson layup to make it a 51-40 contest by the end of the third.

Poplar Bluff got within eight points early in the final period when Luke Becker’s layup with 7:22 remaining made it a 52-44 game — then another Becker layup with 4:18 left made it 57-52, the closest the Mules had been the entire game.

“Luke had a huge task tonight, trying to slow down 35 [Jtayvion Johnson] and I thought he did a good job,” Durden said. “He’s been their best player most of the season. [Luke] slowed him down on defense and he also did a good job on the offensive end."

However, Poplar Bluff came no closer the rest of the way as Southside outscored the Mules 16-8 to end the game.

Southside scored the first eight points of Friday’s game before Becker’s basket with 2:48 remaining in the opening period stopped the Hawks’ game-opening run. However, the Mules’ offensive struggles continued as they trailed 25-11 after Southside’s Janias Parram drained a 3-pointer with 6:15 left in the first half.

The Hawks took a 33-14 lead — their biggest of the game to that point — on Josh Anderson’s free throw with 2:44 remaining in the half. However, Poplar Bluff scored nine of the final 13 points of the half to make it 37-23 going to the locker room — the last three coming on a 35-foot shot by Becker at the halftime buzzer.

Hardimon led the Mules with 14 points, while Becker added 11 and Campbell finished with 10.

Johnson paced Southside with a game-high 18 points, while Parram added 15, Josh Anderson had 11 and Brandon Maclin chipped in 10.

Poplar Bluff will play the loser of Friday’s second semifinal between Jonesboro (Ark.) and Southmoore (Okla.) for third place Saturday at 5:30 p.m., while the Hawks will play the winner of that contest for the Showdown championship immediately afterward at 7 p.m.

“Both of them are really good teams,” Durden said. “They’re both well-coached and they’ve got some great skill players. We’re going to have our hands full again. That’s how this tournament is built — there is never an easy game.”

In Friday’s first consolation game, Arkansas High led 21-10 after one period and 48-26 at the half on the way to a blowout victory.

Jaylon Randle led the Hogs with 22 points, while teammate Jordan Jones had 20, Andre Reed added 15 and Nick Watson finished with 12.

Davonne Wakefield paced Kirby with 17 points, while Christopher Gatewood and Lakevion Odom each scored 13 in the loss.

In Friday’s second consolation semifinal, the Central Warriors pulled away in the second half to turn a close game into a blowout win over the Knights.

Central led the Knights 41-33 at halftime but outscored Kauffman 22-11 in the third quarter and 18-8 in the final period break the game wide open.

Xavier Joubert led the Warriors with 24 points, while Tyler Byrd added 20 and Amarr Knox had 13 in the win.

Brendon Hurd paced the Knights with 17 points, while Trevon Moody finished with 10.

In the second semifinal of the evening, the Sabercats held off a talented Golden Hurricane squad to make it to a Showdown championship matchup with Jackson Southside.

Jordan Thompson led the Sabercats with a game-high 23 points.