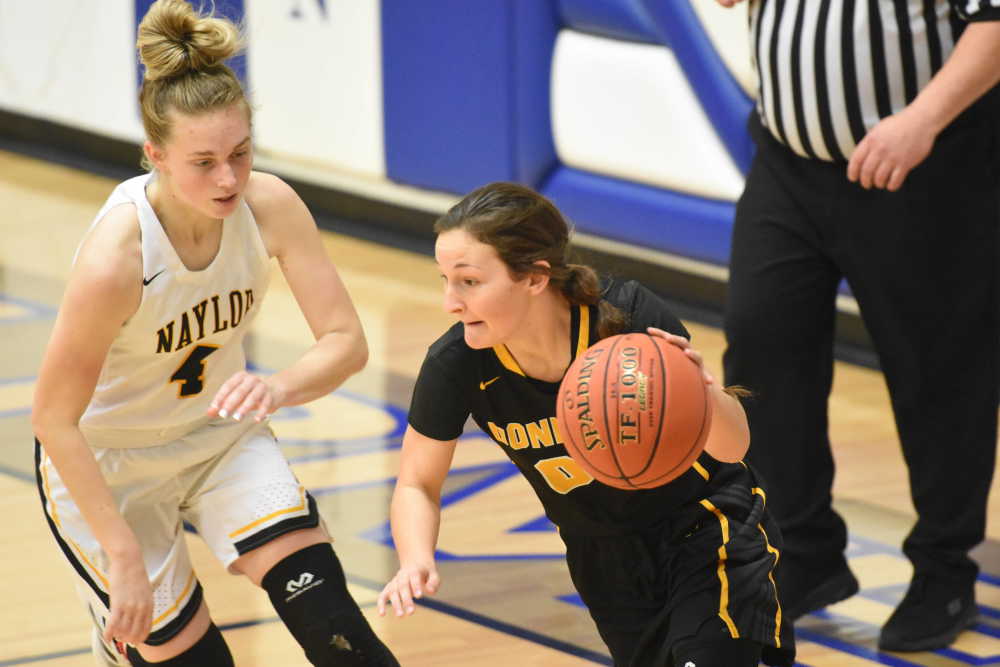 Doniphan's Jaylin Dutton, right, dribbles up the court while being guarded by Naylor's McKenzie Crofford (4) during the Lady Royals Classic on Friday in Broseley.
DAILY AMERICAN REPUBLIC/Scott Borkgren
Order this photo

BROSELEY - Doniphan is back in the Lady Royal Classic championship game for the first time since 2006.

The second-seeded Donettes outlasted third-seeded Naylor in a frenetic game to win 46-37 and advance to the finals against Neelyville, which had to avoid a game-winning 3 at the buzzer to win its own semifinal.

"That was kind of ugly tonight. But we haven't had a game like that and we need games like that, somebody who is going to bow up and play some defense," Doniphan coach Adam Epps said. "(Against Neelyville) we're going to have to score a little bit more, definitely play better defense and not give them second-chance opportunities."

Regardless of Saturday's outcome, it will be Doniphan's best finish in the Classic since 2006. The Donettes, who have won five Lady Royal Classic titles, finished fifth in 2007, and wouldn't finish as high again until they routed Kelly by 30 points last year for fifth place.

Naylor will face New Madrid Central in the third-place game.

"We have to come to play, slow them down and we have to rebound," Naylor coach Gene Deckard said of New Madrid Central.

Saturday's 7:30 p.m. championship game won't include Dexter for the first time since 2011. The Bearcats were four-time defending champs entering the 2019 tournament, but in a down year in 2019, they earned the seventh-seed and were knocked out by Doniphan in the second round.

Neelyville has been the other constant in the championship game and returns yet again, this year as the top seed.

The Tigers last won in 2014 but were runner-ups to Dexter the past four years. The last time a team other than Dexter or Neelyville won the Lady Royals Classic was in 2006 when Doniphan beat Dexter 57-40. And you have to go back to 2004, when Twin Rivers beat Charleston for its second straight title, to find a year when neither Dexter or Neelyville made the final.

On Friday, Doniphan limited Naylor to four points in the third quarter and took the first double-digit lead of the game when Emily Ederer, who finished with 25 points, banked in a shot under the basket with 2 minutes left.

Doniphan starter Ady Jones picked up her fourth foul along the way and went to the bench, but Doniphan still went into the fourth quarter with an eight-point lead.

"We just missed a few shots and didn't execute what we came out to do," Deckard said.

The Donettes opened the fourth with six straight points to go ahead by 14, extending a 15-4 run since the start of the second half.

Faith Sullivan scored with 2 minutes left to get Naylor within eight points.

The Eagles still had two fouls to give as Doniphan started killing the clock. Naylor's Alyssa Urich tried for a pair of diving steals but was called for the reach and Doniphan's Olivia Creutz, who had 13 points, added a pair of free throws with under a minute left.

"Fatigue kind of set in with us a little bit in the second half," Deckard said. "Being shorthanded I thought we played with them pretty well."

Sullivan led the Eagles with 16 points. Naylor didn't have its second-leading scorer Kaylynn Johnson, who was out with an illness.

"We missed Kaylynn big time tonight. She's averaging 14 points per game and we were thinking she could have been a game-changer tonight," Deckard said.

After trailing 6-2 in the opening minutes, Doniphan outscored Naylor 13-5 to close the first quarter, flipping a four-point deficit into a four-point lead.

Brooklyn Klepzig made a 3 off an inbound to start the second quarter, but Naylor soon cut the lead to one thanks to four free throws and a spin move for a bank shot in the paint by Sullivan.

Soon after, the Eagles took the lead for the first time since the middle of the first quarter. Ederer scored a minute later to put Doniphan back in front for the third lead change of the game.

Doniphan spent much of the second quarter in the bonus, and Timber Turner picked up her third foul with two minutes left and went to the bench. McKenzie Crofford made both free throws to tie the game.

In the final seconds of the half, Creutz tried to drive for a layup, but was called for the charge and picked up her third foul with a second left on the clock. The turnover sent the Dons into the locker room with a three-point lead.