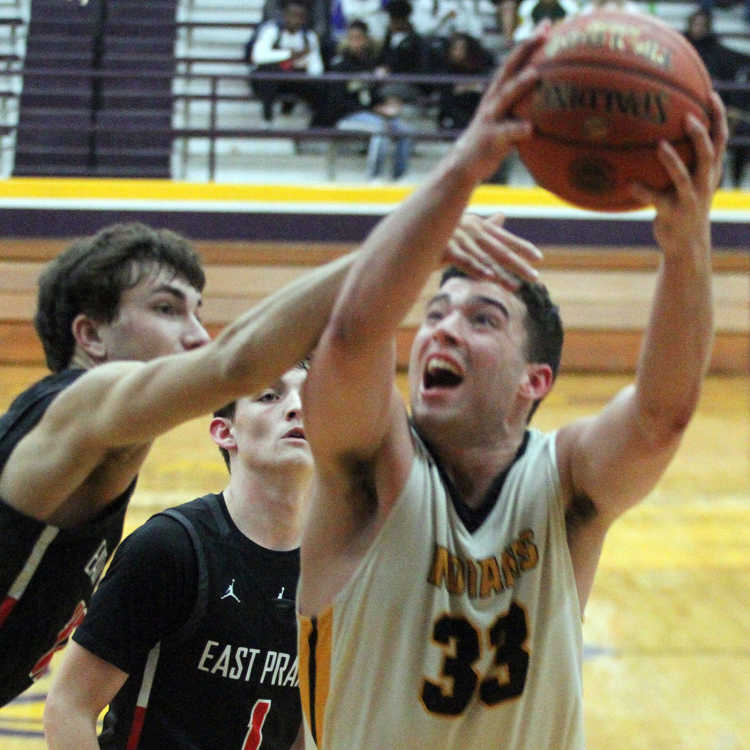 BLOOMFIELD, Mo. - The top-seeded Kennett Indians were firing on all cylinders from the get-go in its championship quarterfinal at the Bloomfield Christmas Tournament Friday night.

Kennett, which put up a season-high 34 points in the first quarter, knocked down five 3-pointers in the opening eight minutes of play.

The sharp shooting helped Kennett surge ahead of the No. 9 seeded East Prairie Eagles 34-11 by the end of the first quarter.

East Prairie got as close as 17 early in the second quarter but never got closer as Kennett rolled to a 79-41 quarterfinal win.

“It was a very solid first quarter for us,” Kennett coach Andrew Halford said. “A lot of our success was due to the fact we got the ball in the right places at the right time. We also created some turnovers and got some layup opportunities in transition. Our guys are capable of scoring like that. It’s just a matter of getting them in game form and in game shape.”

Senior forward Jackson Henfling, who finished with a team-high 23 points, set the tone early for the Indians’ by draining three of his five 3-pointers in the first quarter.

“He came out blazing tonight,” Halford said. “He kind of got us going.”

East Prairie burned two timeouts in the first period as it attempted to cool off the Indians hot shooting.

But the shots kept falling for Kennett.

Kobe Gates knocked down a 3-pointer with 3:10 left in the first period to increase the Indians’ lead to 18-5. Marsay’vaun Harrell followed with another trey about a minute later to put the Indians on top 23-7.

“They shot the ball well,” East Prairie coach Casey Knight said. “We watched them yesterday and they didn’t shoot it well. It’s sort of a running joke we get everyone’s best. I guess in a backwards way that could be a credit to us and where we’ve came from. We used to be down in the dumps and now teams are gearing up to play us. But Kennett is a good, experienced team and we are inexperienced right now. It hard enough to beat them but when they come out and shoot it like that it makes it even harder.”

East Prairie senior forward Harrison Moore attempted to keep the Eagles within striking distance with his own hot shooting early. Moore, who paced the Eagles with 20 points, tallied 13 points in the opening 10 minutes of play.

“He hit some shots and kept us in there early on,” Knight said. “But I thought we settled for too many outside shots early. As soon as we went cold they made an extended run on us.”

“We didn’t shoot it well yesterday the first day after Christmas but we were able to get back in the flow of the game today,” Halford said.

Kennett padded its lead back to 69-40 by the end of the third quarter and won the fourth quarter 10-1.

“I thought we did our best job of moving the ball and getting easier shots in the third quarter,” Knight said. “We needed to do more of that the first half.”

Carter Maddox was one of five Kennett players to score in double digits. He recorded 14 points on seven 2-point baskets.

“We created some turnovers and got out in transition and got some easy buckets,” Halford said. “We did a lot of good things tonight.”

East Prairie (3-4) will try to regroup when it takes on No. 4 seeded Portageville in a fifth-place semifinal Saturday at 4 p.m.

“We got beat today because we were not strong enough mentally or physically,” Knight said. “On paper Kennett may be a team we aren’t supposed to beat but we shouldn’t have gotten beat this bad. Credit Kennett for the way they played today. But we can’t get outworked like we did today in our next game.”

Kennett (8-2) will attempt to extend its winning streak to five games when it takes on No. 5 seeded Hayti in a championship semifinal of the 16-team tournament Saturday at 7 p.m.

“It’s going to be a very high-intensity game in a tough atmosphere,” Halford said. “So we’ve got to move past today and get ready for Saturday.” 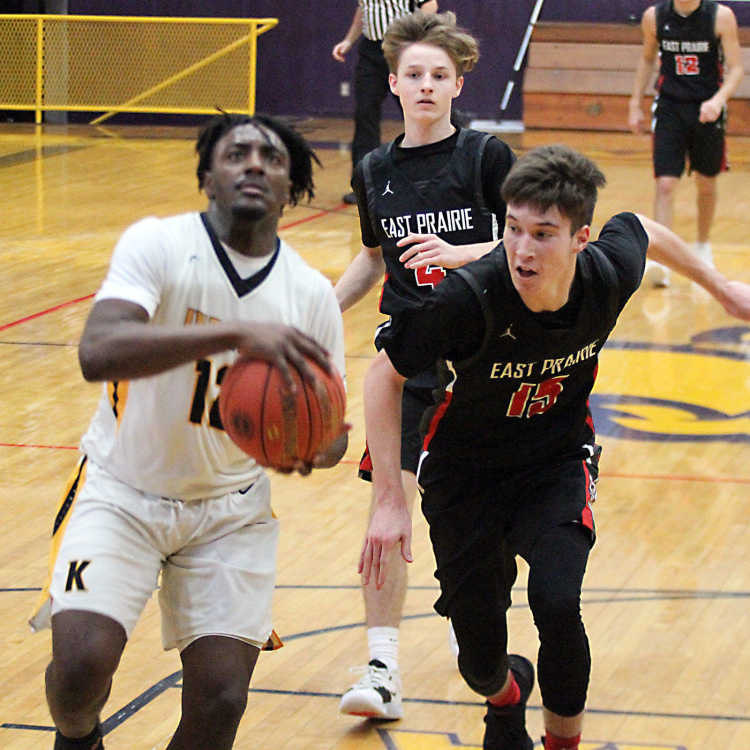 Photo by Dustin Ward, staff
East Prairie's No. 4 Evan Howell (back) and No. 15 Garrison Scott chase after Kennett's Marsay'vaun Harrell in a championship quarterfinal at the Bloomfield Christmas Tournament Friday.
Order this photo
Respond to this story