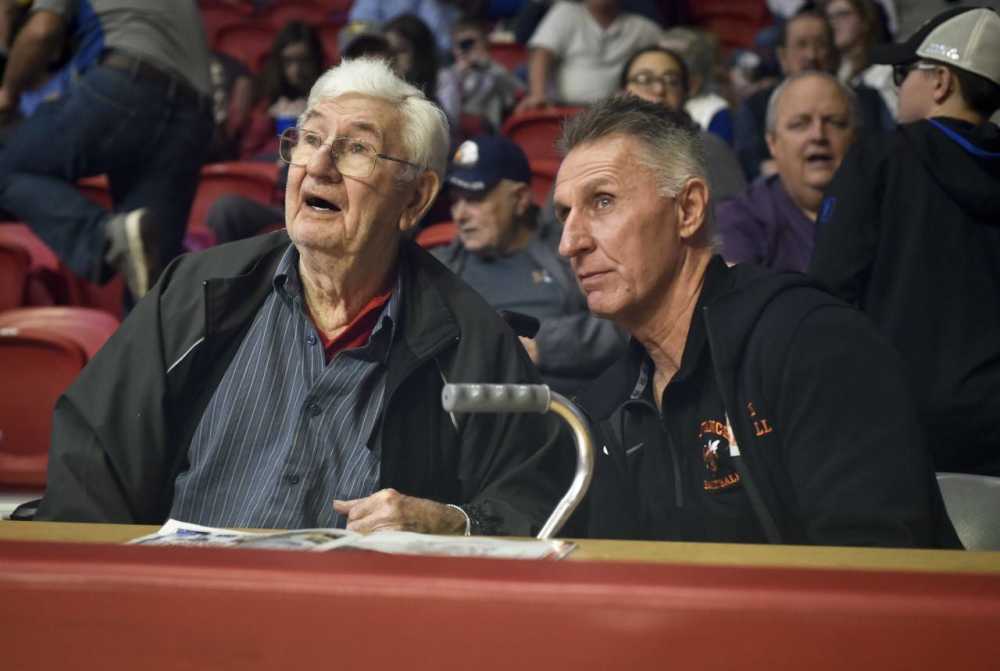 Carroll Cookson celebrated his birthday Thursday in a wheelchair at the Show Me Center. He enjoyed the succession of opening-round games of the Southeast Missourian Christmas Tournament alongside his son, Steve.

Puxico is a town in Stoddard County and has always been small. The hamlet boasts less than 900 residents, according to 2010 census figures.

The community is known for its annual Puxico homecoming celebration each August featuring the local delicacy of goatburgers.

The final score was 42-38. Carroll didn’t play but his late cousin Leon Cookson did and hit some key shots late.

Puxico was known for running and gunning, for fast break basketball, and local residents created placards reading “Run-Shoot-Run” to celebrate the team’s success.

In the ’51 final, Waynesville managed to slow down the Indians up-tempo game — but not enough to deny victory.

Carroll was a reserve on that undefeated ’51 squad, coached by Arnold Ryan, for whom the current Puxico High gymnasium is named.

The St. Louis Post-Dispatch put it this way: “The magic name of Puxico has filled every arena in which Arnold Ryan’s Indians have appeared ... in rolling to a 40-0 record (1950-51), Puxico frequently scored 100 or more points.”

The next season, tiny Puxico High did it again, going 39-2 and taking the 1952 Class B championship — once more at Houck. This time, Carroll started as a senior guard and logged nine points for the champion Indians.

Carroll remembers a different facility in his day — as Puxico possessed one of the last log gyms in the state of Missouri.

After the ’52 season, Carroll followed his coach to Memphis State but didn’t stay long, returning to Puxico.

Lured by a basketball scholarship offer, Carroll left car making and went to a two-year community college in Arkansas, ultimately finishing his education at the University of the Ozarks.

With his Bachelor of Science in physical education and history, Carroll came to the Advance Schools in 1966, as a teacher and coach of the district’s basketball team. He led the Hornets to the Class S title in 1972 with a 69-61 victory over Marion C. Early and to the Class 1A crown in 1975 with a 55-44 win over Northeast Nodaway. Carroll later became high school principal at Advance.

As Cookson watched from media row at the Show Me Center, he recalled his playing days in the Christmas Tournament in the early 1950s.

“It was different,” the octogenarian said. “There were no 3-point shots (in my day) and the lane to the hoop was more narrow.”

“Did you ever see the movie ‘Hoosiers’?” asked his son Steve.

Steve refers to Indiana’s state championship team of the early 1950s from the small town of Milan — on which the 1986 film, starring Gene Hackman, is loosely based.

“Puxico was Missouri’s version of the Hoosiers,” Steve Cookson said.

The sports journey of his dad, Carroll Cookson, is a reminder to all who come to watch high school basketball in Cape over the holidays.

Small schools can win it all.