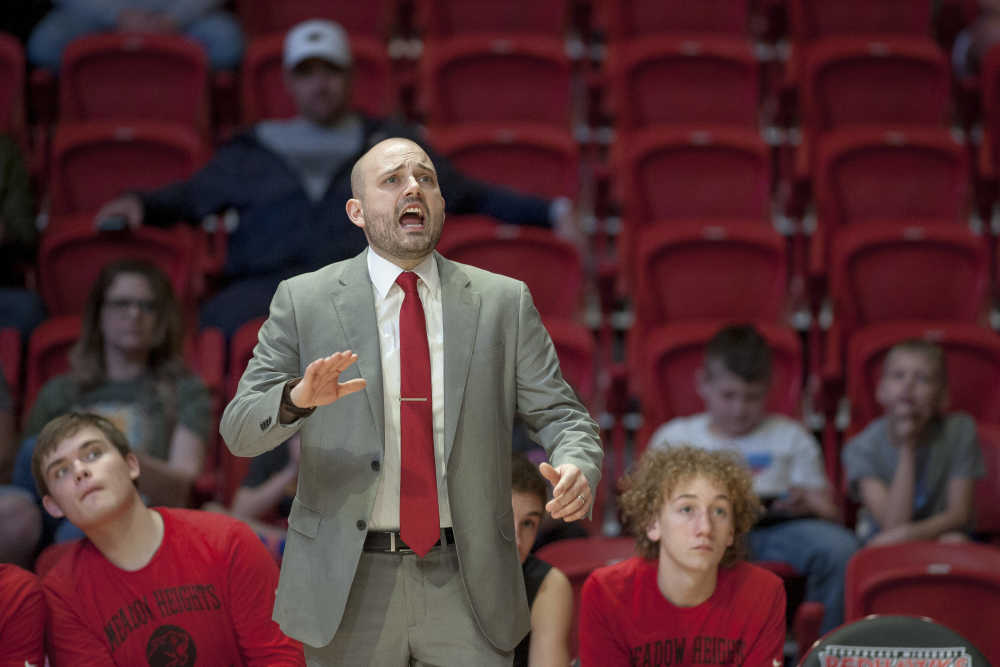 The second round of the 75th annual Southeast Missourian Christmas Tournament got underway Friday with four games in the consolation bracket and four in the championship bracket.

Here is a rundown of those games.

Every team that plays against Bell City has the same defensive game plan and that is to slow Cubs’ scorer Luke Nichols down. Meadow Heights was able to do that in its 61-30 victory in the second round of the Southeast Missourian Christmas Tournament Saturday at the Show Me Center.

The Panthers (4-3) forced the 5-foot-11 athlete into early foul trouble, which limited his effectiveness (and playing time). They were able to stretch a tight game into a comfortable margin as Nichols sat on the bench after picking up his third foul with just over a minute remaining in the opening period.

“The thing about (Nichols),” third-year Panthers coach Corey Brownsberger said, “you have to make his shots tough. You have to close out and make his looks tough and we did that for the most part.”

Nichols finished with 17 points, but only four came after halftime.

Meadow Heights led 13-7 after the first period and 25-17 at the break but it really began to dominate the glass with a bigger, stronger lineup.

Countless times, the Cubs (2-5) would defend and force Meadow Heights into a missed shot only to allow a Panther player to grab the offensive board and score.

The level of competition gets tougher with each step of this tournament and the Panthers will now face the winner of Kelly vs. Scott County Central Saturday at noon in the consolation semifinal.

“We didn’t play our best down there,” Brownsberger said. “But we’ve been getting better over the last couple of weeks. If it ends up being Kelly (we play), we should be able to give them a game.”

For a little while, about eight minutes, it looked like an upset was in the making, as the #16 Braves, the lowest seed in the tournament, came out firing and took a 16-9 lead at the end of the first period.

"We played lousy, it was really bad in the first quarter," said Kelly coach Fred Johnson.

"I guess it's Christmastime and guys weren't ready to play."

Johnson's squad righted the ship quickly, going on a 16-0 run in the second period and never looked back.

Johnson is acutely aware that he has a young team, with two sophomores, two juniors, and just one senior - and he had the Hawks running up and down the court continuously.

No half-court sets for Johnson, the first-year coach of Kelly.

"With young kids," Johnson advised, "the best way for us to keep the pressure up is to keep the ball moving all the time."

Kelly had no 3-pointers in the contest, a rarity in the run-and-gun style of 21st-century basketball. Johnson said the lack of trays was a reflection of a lack of recent success.

"Normally we shoot threes but for some reason," Johnson said, "we haven't been hitting them lately - so for this tournament, so we went more conservative."

Drew Dirnberger, who led all scorers with 29 points, had a remarkable display of sportsmanship in the third quarter.

When the Braves' Kaden Sadler fell hard, Dirnberger made a special effort to extend his hand and help the sophomore to his feet.

"(Drew) is a good kid," Johnson said. "He's a hard-working young man and smart. I think the world of him."

For Johnson, coaching the Hawks marks his return to prep hoops. He retired as boys basketball coach in Sikeston in 1998. Johnson returned for one year to helm the Bulldog girls program in 2005 but had not seen the sideline again until this fall.

Kelly advances in the consolation bracket to face Meadow Heights in a 12noon tip Saturday.

Advance did just that with a comfortable win over Woodland Friday, but it wasn’t a smooth ride for Hornet coach Dennis “Bubba” Wheetley.

The Hornets (6-2) dominated the Cardinals (2-8) throughout the opening period, but then let up and allowed Woodland to outscore them 18-11 in the second period. Advance led by a slim margin (31-27) entering the third period.

“We’re just not consistent right now,” Wheetley said. “We have too many turnovers and we can’t make free throws. It’s just a little bit of everything.”

To Wheetley’s point, Advance missed half of its 26 free throws.

However, the Hornets found some footing in the third period, as senior guard Jack Below scored 10 of his team’s 19 points and they stretched their advantage to 50-39.

Below finished with a game-high 28 points, while junior forward Landon Dailey totaled 23.

“We’re still working on our defense and trying to clean it up and do better,” Wheetley said. “We didn’t rebound. Every facet of the game we have to do better.”

The Cardinals did outrebound the Hornets, but Woodland lacked the firepower of a Below and Dailey.

Woodland couldn’t get to the free-throw line (only nine attempts) and couldn’t fight its way back into the game over the final 16 minutes.

Sophomore guard Cecil Abernathy scored 13 points for the Cardinals, but it was the continued driving ability of junior forward Kyle Balsman that proved to be Woodland’s highlight offensively.

Balsman had just four points at the end of the opening quarter but scored 11 in that pivotal second period. He finished with a team-high 22 points.

Boy, was he ever ready.

Thoma played nearly a perfect game for Notre Dame, including going 8-for-9 from the free throw line. He had an important block on Delta standout Eric Berry.

The senior found himself completely unguarded in the post in the first quarter leading to easy baskets.

“He scored a bunch (of points),” said Unterreiner, “and did a good job for us at both ends of the floor.”

“(Justice) gets in a zone and just makes some good decisions.”

Thoma’s only mistake did not cost the winners, as his errant pass was picked off by Delta in the third quarter.

Two other Bulldogs were in double figures in Friday’s second round action as Tyler Landewee and Caleb LeGrand had 16 and 11 points respectively.

Delta’s 6-foot-3 junior Colby Crader was the only Bobcat in double figures for the losing squad, registering 15 points – most of them in the third quarter.

Three players fouled out of the contest – Dale Lincoln and Grant Coomer for Delta; Caleb LeGrand for Notre Dame.

In what may end up as the most interesting game of the four-day tournament, third-seeded Notre Dame faces off against #2 seed Cape Central Saturday at 7:30 p.m.

“We’ll have to play better than we did tonight if we want to compete against Cape Central,” said Unterreiner. “We didn’t rebound very well and I’m a little disappointed about that.”