BCT: Portageville hangs on for 57-50 win over Bloomfield 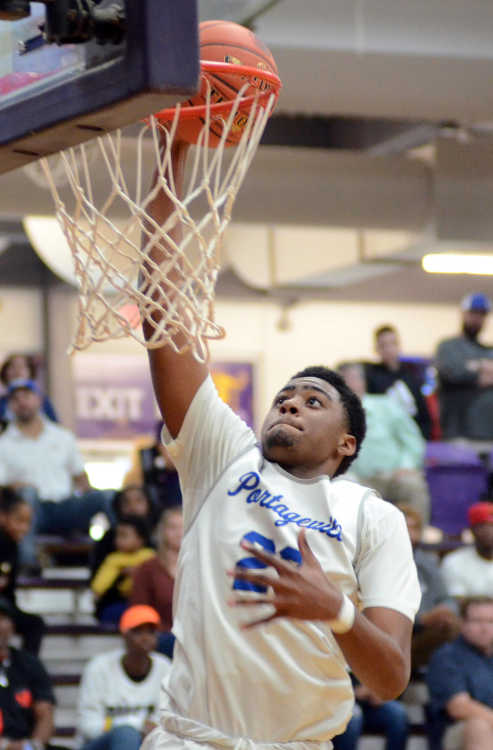 BLOOMFIELD, Mo – What looked to be another opening round blowout turned into anything but when fourth-seeded Portageville took on the host and 13th-seeded Bloomfield on Thursday in the 63rd Annual Bloomfield Christmas Tournament.

After holding a double-digit first-quarter lead, the Bulldogs had to mount a second-half comeback to advance to the quarterfinals, 57-50, and avoid the first upset of the tournament.

“We came out with good energy, which is something we struggled with the last two games,” Portageville head coach Jason Irby said. “We got to gambling too much in our trap, and they figured some things out and started shooting layups. We struggled all game with guarding the ball. We’re getting beat on dribble penetration, which is causing our fouls.

“It wasn’t pretty, but it’s a lot better than playing at 10 in the morning tomorrow. We’re glad to advance.”

While Bloomfield eventually adjusted, the Bulldogs’ trap defense led to a blistering 20-6 Portageville run to start the game.

A Dawson Hill 3-pointer to close the quarter brought the Wildcats back within nine points before a hot second frame put Bloomfield in control of the game.

After scoring the last five points of the first quarter, the Wildcats went on a 13-2 run through the first six-and-a-half minutes of the second quarter.

A Jamison Dodd put-back closed Bloomfield’s deficit to a point, 25-24, with two minutes left in the half.

A Bulldog turnover soon followed, allowing for a Parker Heaton three that capped the Wildcat’s comeback and put them in the lead 27-25 with 1:25 left before the half.

“We finally got a little composure,” Bloomfield head coach Brandon Crook said. “It rattled us a little at first. I feel like we got sped up and weren’t making fundamental plays.

“We settled down a little bit and started making some plays, the right plays.”

A Portageville surge left the Bulldogs up by a basket at the break, 30-28, but the Wildcats came out in the third again and rallied from behind for a 10-3 run the first four minutes of the quarter.

Another Dodd put-back was followed by a bucket by Heaton to give Bloomfield its biggest lead of the night, 38-33, with 4:18 left in the third.

A Drew Irby 3-pointer soon after started a push by the Bulldogs that extended the final 10 minutes of the contest.

Jabryson Rand knotted the game up, 38-38, and Irby stole a pass for a layup to make it seven-straight points and give his team the lead for good.

With 6:24 to play, Bloomfield was still within two points but started to fade soon after.

AJ Hicks’ third and final 3-pointers of the game extended Portageville’s advantage to eight, 50-42, with 5:47 remaining.

Though the Wildcats came back within two possessions midway through the quarter, they were never able to get any closer than six points the rest of the way.

“They started fatiguing a little bit,” Jason Irby said of Bloomfield. “I also think Brendan Garmon, our big guy, wasn’t rebounding earlier, and he stepped up and played like he’s capable of. That wore them down as much as anything.

“Our kids played with poise in the fourth quarter, and we were able to sneak out with a win. It’s always tough playing Bloomfield in the first round.”

Drew Irby led the Bulldogs with 16 points while Hicks was close behind with 15 points, including a game-high three 3-pointers. Garmon was the third Portageville players in double-digits with 13 points.

Dodd’s 15 points paced the Wildcats with Colton Hyslop adding 10 points to Bloomfield’s cause.

Struggling at the free-throw line hurt the Wildcats in the end, going 5 of 11 from the foul line in the fourth quarter and 11 of 25 overall.

“The second half we had some chances,” Crook said. “If we knock down some free throws, I feel like we narrow the gap or even cushions are lead when we had one late in the third.

“I was pleased with our effort, and we gave ourselves a chance.”

Portageville will play fifth-seeded Hayti today at 5:30 p.m. in the championship quarterfinals. Bloomfield takes on 12th-seeded South Pemiscot at 10 a.m. today in the consolation quarterfinals.