BCT: East Prairie squeaks by Malden in first round of the Bloomfield Christmas Tournament thanks to strong finish 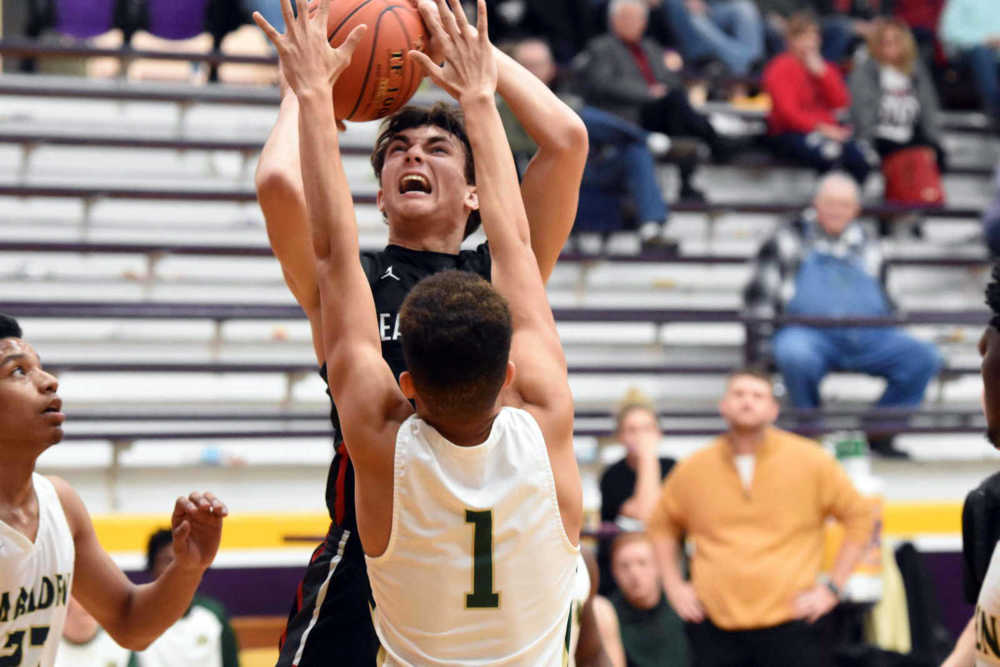 BLOOMFIELD, Mo. — Trailing by two points with one possession left, Malden head coach Cole McBroom designed a play that gave his team a chance to send the game into overtime.

Sophomore Marques Jones caught the ball on the right block, pump-faked, and got the East Prairie defender to bite, and drew a foul with just under one second left to play.

Heading to the line, pressure weighing on the 6-foot-5 Jones’ shoulders, he missed the ensuing foul shot, which all but assured a 56-54 win for ninth-seeded East Prairie on Thursday in the first round of the 63rd Annual Bloomfield Christmas Tournament, at Bloomfield High School.

Despite missing a critical shot, McBroom said that he isn’t putting any of the blame on that final possession.

“We were trying to run a little double-action to get Marques a chance at the rim,” McBroom said. “It worked well. We had a good pass, Marques made a good cut, and he got fouled. There’s a lot of pressure on a 15-year-old kid to sink two free throws with 0.3 seconds left. So, I don’t think we can put this on the last possession. I think Marques played a pretty solid game.”

Jones finished with 14 points, on 7 of 15 shooting, and neared a double-double, with nine rebounds.

Containing the athleticism, size, and quickness of Malden was a tough task, and for East Prairie head coach Casey Knight, coming away with a win — no matter the result — is a plus in his book.

“That’s common here on the first day,” said Knight on his team’s victory. “I think it’s even harder playing the last game of the day. We had a game plan; we stuck to it. It was scary down the stretch, but we were able to pull it off.”

Toward the end of the game, East Prairie had multiple opportunities to push the margin more in its favor. Free-throw shooting, though, proved to be the Eagles’ downfall.

It started when Trea Cade got fouled with 37 seconds left.

Cade made one of his two free-throw attempts, pushing the East Prairie lead to four points, at 56-52.

Malden, though, scored quickly, and fouled once again, to send the Eagles to the line up by two points.

East Prairie, however, missed the lone shot from the charity stripe, and Jones used his long frame to grab the rebound.

Alert and at the right place at the right time, though, senior Harrison Moore stole the ball from Jones and dribbled it to the right-wing, where the Green Wave fouled him.

“It was huge,” Knight said. “It could have sealed it, but unfortunately, Harrison stepped up to the line and missed his free throws too. Some game-sealers on the line would have made it a lot easier on me as a coach, but if it’s going to be a hard-fought, ugly win, you might as well make it even more difficult on yourself.”

Moore finished with 13 points, on 6 of 17 shooting, and eight rebounds to lead the Eagles in both categories. 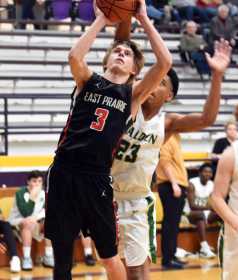 However, clutch perimeter shooting pushed the Eagles ahead on Thursday and quieted some Malden runs as well, especially from senior Jack Scruggs.

“Jack’s a guy that can score,” Knight said. “He hasn’t been in rhythm this year, but he hit shots for this team last year. We don’t want to rely on the three-point shot, but tonight, we were fortunate enough to get those threes at good, timely situations where we needed them to either stretch the lead or maybe they had cut the lead and gave us a little bit more of a cushion right back.”

Scruggs finished with a team-high 14 points, on 4 of 5 shooting from three.

Sientez Lerma had 14 points for Malden, doing most of his damage from the charity stripe, where he was 6 of 12. He added seven rebounds as well.

It was the play from junior Coy Wade that most notably caught the eye from McBroom.

Aggressive the entire night, Wade was always around the ball, no matter the situation. He finished with a game-high 16 points, on 7 of 20 shooting, and 18 rebounds.

“Freak athlete and has shown steps of maturity this year,” said McBroom of Wade. “He’s being a better teammate, and he’s taken big steps forward. He’s just a junior, and he’s going to continue to improve and continue to get better. Whenever he’s looking to attack, we’re a better team.”

Malden plays No. 16-seed Richland in the consolation quarterfinals, at 2:30, today. East Prairie plays No. 1-seed Kennett at 4, in the championship quarterfinals today as well.