Oak Ridge proving not to be a one-man show 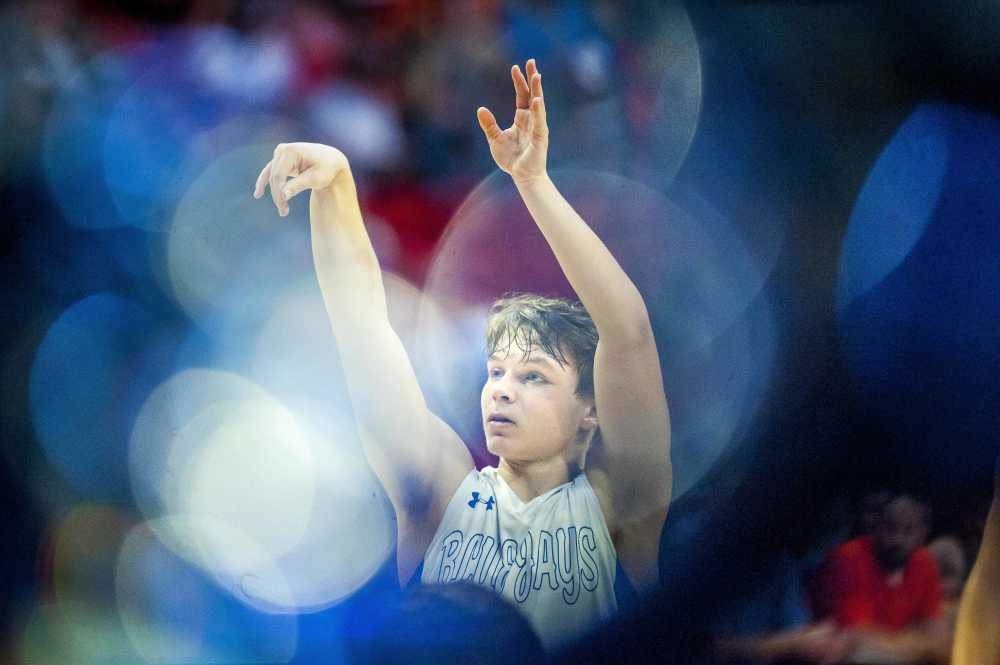 Oak Ridge junior shooter Kyran Newell (3) is partially obscured by a cheerleader's pom-pom while shooting a free-throw during the Southeast Missourian Christmas Tournament Thursday at the Show Me Center in Cape Girardeau.
Tyler Graef ~ Southeast Missourian
Order this photo

The No. 7-seed Oak Ridge boy’s basketball squad defied logic in its 79-63 win over No. 10-seed Advance in the opening round of the Southeast Missourian Christmas Tournament at the Show Me Center.

With 4:45 remaining in the second quarter, the Blue Jays’ scoring machine, senior guard David Layton, picked up his third foul and headed to the bench for the remainder of the half. Oak Ridge managed to not just survive without Layton, but it somehow found a way to thrive without him.

“(Layton) not being able to play,” Oak Ridge coach Chris Trimmer said, “it’s good for the rest of the guys to have to step up.”

Trimmer had been preparing for this moment since last summer.

Layton was the leading scorer in the state of Missouri as a junior (35 points per game) but had to sit out the entire summer with a chronic case of patellar tendonitis in both knees.

“It’s the first time the kid has missed anything since the second grade,” Trimmer said.

Trimmer didn’t know if he would have Layton at all this season until just a few weeks before the season. He has been able to play but not to the level that he has in the past.

His scoring has dropped over 10 points per game and there are stretches of games, even complete games, in which Layton has had to sit out.

“He’s playing through a lot of pain,” Trimmer said. “He’s not even close to the same as he was last year, which obviously is hard for him to take. It’s a mental issue with him but he is becoming to trust his teammates more.”

A night like Thursday will help in that regard.

The Blue Jays trailed 26-25 when Layton went to the bench in the second quarter and he did the same with 1:55 left in the third when he picked up his fourth foul. At that point, Oak Ridge led 50-49 but it stretched that margin to 71-53 without Layton scoring a single point.

Newell scored 15 of his 20 points during the stretch, while LeGrand, Schamburg, and Luke Johnson each produced offensively.

“The rest of the team realizes they need to elevate their game,” Trimmer said. “It was a really good performance for us. We needed this.”

Layton scored 14 points in the first half before heading to the bench and finished the game with 23.

Hornet senior Jack Below had a team-best 21 points, while Landon Dailey totaled 12.

“We’re going to be massive underdogs against a really good Cape Central team,” Trimmer said. “I don’t have a problem with that. For us, it’s a matter of coming out and working on things that we need to do to get better.

“I would love to have the greatest upset in the history of the (Christmas Tournament). Instead of “Hoosiers,” they’d be making a movie about us.”