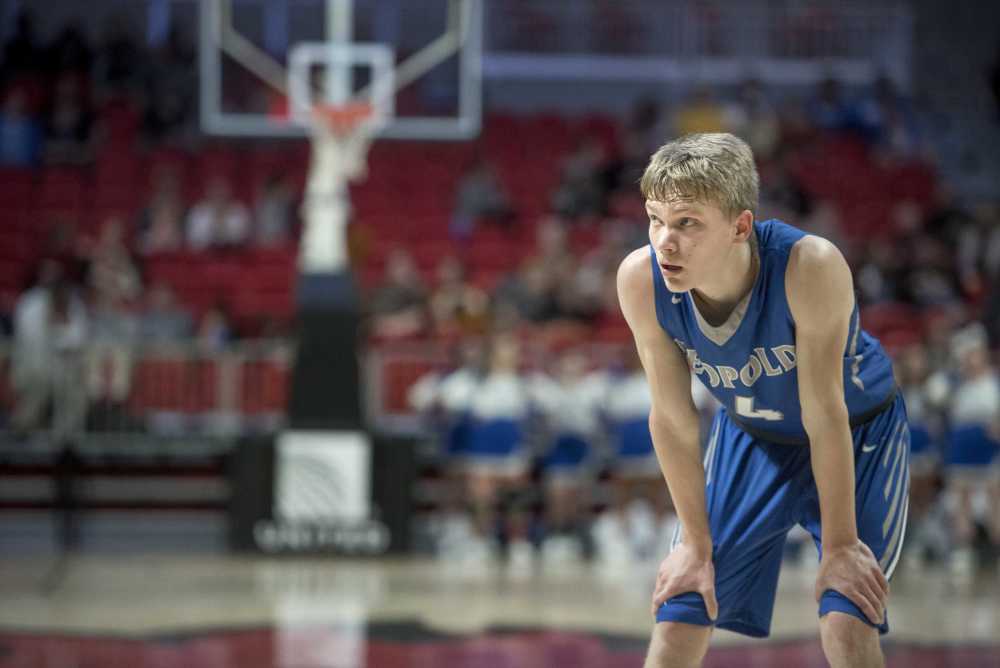 Cameron Abernathy (4) gets his breath in Leopold's 101-74 loss to Delta Thursday at the Show Me Center.
Tyler Graef - tgraef@semissourian.com

The day after Christmas is hard for any group of young men. The holiday is a down day for players and their families and the aftereffects can spill over to the next day. So it was on Thursday for the 12-man squad from Leopold.

Both coaches in the Delta-Leopold contest agreed fatigue played a substantial role in Delta’s 101-74 win Thursday at the Show Me Center in the opening round of the Southeast Missourian Christmas Tournament.

“I think some of (our defeat) was a little bit of fatigue,” admitted Leopold coach Mark Kiehne.

For a short while in the first half, Leopold got within three of a team that just a week ago had beaten them by 45 points on their home court. Delta overwhelmed the Wildcats 101-56 on Dec. 19.

The Wildcats (3-5) were down just six at intermission Thursday, 41-35, and the Leopold faithful had hope that a different result might be in the offing.

But there’s that word again – fatigue – which emerged in the postgame comments from each coach.

“I thought our point guard got fatigued,” said Kiehne, “and some of his selections were poor.”

“Yes,” said Hahn, “(Leopold’s) fatigue factor kind of came out in the second half.”

For Leopold’s Kiehne, the loss cannot simply be laid at the feet of being tired.

“We had layup (chances) that we missed and then (Delta) went right down the floor and made theirs.”

Delta got nearly a third of their points from 3s as no fewer than 11 baskets were sunk by the Bobcats from outside the arc.

Three-pointers are an emphasis for Delta (8-1).

Hahn singled out his two top scorers for particular praise.

“Isaiah (Thomas) is a great shooter,” said Hahn, “and Eric (Berry) is probably one of the best point guards in the area.”

Berry, a 5-foot-11 senior, finished with 26 points to lead all scorers, while fellow senior Thomas added 22.

Sixth-seeded Delta now looks ahead to a big Friday test against third-ranked Notre Dame with a 7:30 p.m. tipoff time.

“We’ve got to watch our energy and play our game,” said Hahn. “I felt like we stood around a little too much (against Leopold).”

“In a week’s time, we shaved off a ton of points,” Kiehne said. “I can live with that (and) we’ll see if we can bounce back the rest of the tournament.”

Kiehne wants his Wildcats to remember their impressive first-half showing.

“We (know) we are good but we have to sustain,” said Kiehne. “We can’t lose focus on needing to pass or hitting the open guy.”

Leopold will face Chaffee in a scheduled 12noon tip Friday on the consolation side of the bracket.