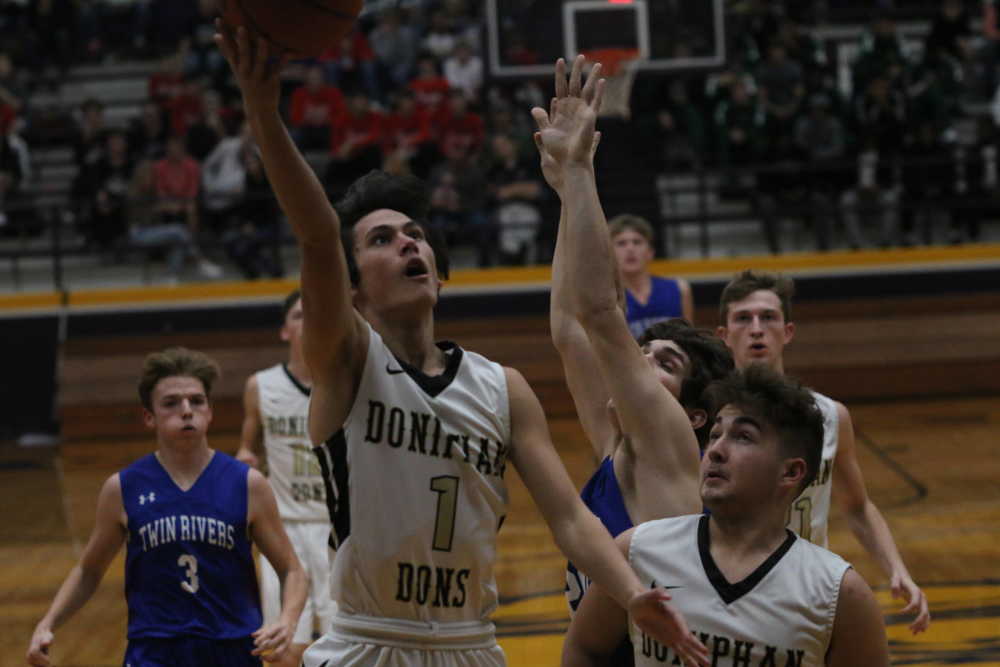 BLOOMFIELD - Doniphan trailed for just one possession. Had there been a second it may have cost them the win.

After taking control early, the sixth-seeded Dons narrowly held off 11th-seeded Twin Rivers to win 59-54 in the opening round of the Bloomfield Christmas Tournament on Thursday in Bloomfield.

Twin Rivers took its first and only lead with 3 minutes left in the third quarter after Parker Watson kicked out to Jolby Jones for a 3. It was the fourth 3 for the Royals in less than 3 minutes.

"We were trying to fend off that hot shooting. They were hot in the second half," Doniphan coach Daniel Cagle said. "I thought we played really well most of the first and second quarter defensively. We let the shooters get loose in the second half and they got hot. It seemed like everything they put up went it."

To take the lead, Watson, who led the Royals with 15 points, made 3s on back-to-back possessions and tried again on the next possession from the same spot on the right side. He missed, but Isaac Thurman grabbed the offensive rebound and was fouled on the putback. His free throw cut Doniphan's lead to one possession for the first time since the score was 8-5.

A minute later, Brent Trout made a pair of free throws to cut the lead to two points, and Jones followed that with a 3 to go ahead 38-37.

"They're just good kids and they keep battling all the time," Twin Rivers coach Seth McBroom said. "We would work hard and battle back and we would have one little breakdown defensively and they would capitalize."

Doniphan center Orie Owen, who had 14 points, 12 of which were in the second half, converted a three-point play on the very next possession and the Dons were back up by six a minute after losing the lead.

Doniphan held for the final shot of the quarter but threw it away with 12 seconds left, and Miler Gerhke finished the fast break with a slam that brought the Twin Rivers fans to their feet.

After a back and forth start to the fourth quarter, Jones, who had 12 points, made a 3 with 3 1/2 minutes left to cut Doniphan's lead back to three points.

With a minute and change left, Nolan Czerwonka scored through a foul but missed the free throw to put Doniphan ahead by six.

Brandon Moore jumped a Twin Rivers pass, but the Dons turned over the two-on-one break.

At the other end, Twin Rivers got the ball inside to Gehrke, who kicked out to Brent Trout for a corner 3.

With the Royals down by three and 35 seconds left, Trout committed his fifth foul, putting Doniphan point guard Tristain Bryant on the line.

He made one, and the Royals committed a turnover and a foul at the other end.

Ethan Jones added a free throw to continue Doniphan's 50 percent free-throw shooting for the game, the Royals missed a 3, and down by five with 7 seconds left the Royals opted not to foul.

Ethan Jones led Doniphan with 16 points after making all five of the team's 3-pointers.

Doniphan advances to play third-seeded Dexter in the second round at 8:30 p.m. Friday.

Twin Rivers will face 14th seeded Puxico at 1 p.m. Friday, which it has beaten twice this season by a combined six points.

In a low-scoring first quarter, the Dons took a 5-0 lead and the Royals soon tied it. Each team still had a pair of field goals to their names as the ticked past the 3-minute mark.

Ethan Jones made a 3 for Doniphan for its first field goal since the opening possessions, and it was also the last points of the first quarter.

"That's been us all year long. We play well, we keep the score low defensively but we've had our problems scoring the basketball this year," Cagle said.

But the Dons opened the second quarter hot and went on a 16-2 run that lasted more than 8 minutes.

Brandon Moore made a jumper in transition, and Czerwonka followed that with a bucket off a turnover.

Soon after, Alex Harris banked in a baseline jumper and made another one from the same spot on the next possession - minus the bank.

Bryant added a pair of baskets and then Kameron Barton finished the run with a free throw.

The Royals' only points during a full quarter worth of time were a pair of free throws, one each from Watson and Gerhke.

With less than 3 minutes left in the first half, Gerhke was the only Royal to have made a field goal.

That changed quick, fast and in a hurry.

Twin Rivers closed the final 2 1/2 minutes of the half with a 12-3 run to cut Doniphan's lead from 14 points to five by the buzzer.

"Our body language was bad and we had a slow start. They're good character kids, they're going to battle back because that's what you have to do. We had zero energy and at the start of the game we weren't executing," McBroom said.

Trout made a corner 3 to start things off, and soon Jolby Jones added a three-point play to cut the Dons' lead to single digits.

In the closing seconds, Gerhke putback his own shot to make the score 24-19 at the break.