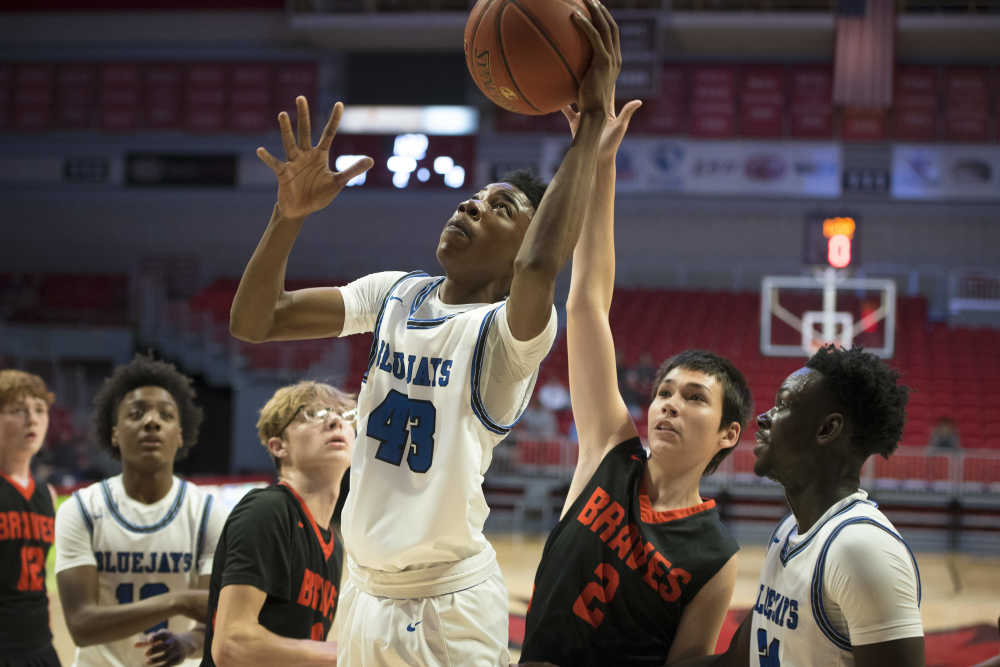 Here is a roundup of each game.

Charleston scored the game’s initial 37 points and didn’t allow a bucket by Scott County Central until 22 seconds remained in the first quarter, as it beat the Braves 110-29 to open the 75th annual Southeast Missourian Christmas Tournament Thursday at the Show Me Center.

“What we wanted to do was have effort,” Charleston coach Danny Farmer said afterward. “We were measuring effort and wanted to come out and play hard.”

Freshman Rico Coleman added 16 in the win, while Sam Bledsoe and Blessin Kimble, both Charleston starters, but limited in time Thursday due to the margin, scored 14 points apiece.

The Braves (0-6) were able to score 16 points in the second quarter against the Charleston bench but still trailed 63-18 at the intermission.

“I didn’t want to come out sluggish,” Farmer said. “We wanted to play hard and get ready for the next round. I thought we did a pretty good job of getting after it.”

Scott County Central will face the loser of the Scott City vs. Kelly match-up at 1:30 p.m. Friday.

Woodland took an early 4-2 lead in its upset quest against Cape Girardeau Central, but the euphoria was short-lived.

Tiger seniors Tyrus Reddin and Doreante’ Tucker scored 22 and 13 points, respectively to pace the winners, which didn’t surprise their coach.

“These are games where our older guys have been here and been successful in this tournament,” Church continued. “Off the court, seeing people communicating. The older guys talking the younger kids about doing this in this situation. It’s a cool environment for our guys. They enjoy this.”

The Tigers put up 25, 24 and 25 points, respectively in the opening three quarters, while the running clock limited the Cape Central reserves to just eight points in the fourth quarter.

The Cardinals (2-7) got six points from junior Kyle Balsman, while senior Jasper Storie and sophomore Cecil Abernathy each put in four points.

In the first couple minutes of the 82-26 Notre Dame win, senior forward Justice Thoma left the game with an ankle injury, while later in the opening half, senior Tyler Parker got nauseous and deposited his breakfast in a nearby trash can.

Neither player came back into the game.

“(The flu) is going through the school,” Bulldog coach Paul Unterreiner said. “It’s just going around. Every school is battling it.”

Unterreiner said Thoma could have come back if needed, but after taking a 20-3 lead after one quarter and 41-8 by halftime, that wasn’t necessary.

Notre Dame cleared its bench early and often and ultimately was led in scoring by junior guard Hayden Jansen with 16 points.

Junior Jake Young added nine in the victory, while Chaffee was paced by senior guard Wyatt Parker with 14 points.

Notre Dame moves on to play the winner of Delta and Leopold Friday at 7:30 p.m., while Chaffee will face the loser of that game at noon.

Jackson's Nick Wasilewski provided the metaphor for this Class 5 vs Class 1 contest between Jackson and Bell City.

The 6-foot-5 junior stood in the post awaiting a Bell City layup with 2 minutes remaining in the first half.

Wasilewski slapped the ball down in a powerful block - a snapshot into the reality of the Indians' overwhelming win over the Cubs Thursday afternoon.

"(Nick) has really worked hard on his timing to block shots," agreed Jackson coach Darrin Scott. "That was a big play."

The Tribe had a balanced scoring attack with three players in double figures - Wasilewski and 6-foot-8 freshman Clayton Ernst had 12 points and senior Lane Crowden added 10.

Jackson dropped six baskets from beyond the arc - as Quinn Scott and Luke Mirly landed a pair of 3s, with Rylan Martin and Markiese Jones off the bench added one each.

Bell City's scoring is attributed mainly to Luke Nichols, a 5-foot-11 junior, who had 19 points to lead both teams.

"I was really impressed with that Nichols kid," said Jackson skipper Scott. "He had to create offense for them (and) didn't force anything."

Nichols' coach was also effusive in his praise for his offensive playmaker.

"(Luke) plays hard, he's a great kid, and he wants to get better at everything," said Bell City coach Dominitrix Johnson, in his second full year at the helm of the Cubs.

"We've got some kids hurt, two starters are out and three of our kids were throwing up by halftime," said Johnson.

"When you play against a bigger school (Jackson)," Johnson added, "you need all the pieces - you need everybody."

Bell City finally got a point from someone not named Nichols with 4:21 left in the 3rd quarter when the Cubs' Austin Hunt put in a layup.

Jackson (4-2) now awaits this afternoon's Oran-Meadow Heights winner (scheduled 4:30 p.m. tip) and will play again Friday night at the Show Me Center. That contest is scheduled for 9 p.m. tomorrow.

Oran coach Joe Shoemaker lost senior Todd Priggel to an undetermined injury in the 2nd quarter and will have X-rays but it was not enough to slow the Eagles as they dominated Meadow Heights, 70-43.

Oran took control in the second half after a shaky start.

"Yes, we were a little rusty at the beginning," said Shoemaker, "but we don't practice on Christmas Day. I know some coaches do but (my guys) needed some rest."

Tyson Goodale stepped up in Priggel's absence and finished with 27 points, including a tray, plus multiple steals.

"Ty was huge for us today," said Shoemaker, "but as a team, we didn't shoot well nor did we protect the ball well,"

Nine days after defeating the Hawks on their home court, the Scott City Rams did it again Thursday, outmuscling Kelly again - this time on the big stage of the Show Me Center. Camden Conner led Scott City with 29 points, including 3 3s.

"Camden's a good player," said Scott City coach Mark Dannenmueller, "and he's put in a lot of time in the offseason to get better."

"(Kelly) is a good team and coached well," said Dannenmueller. "We thought they might go on a run but they got six of those points on offensive put-backs."

Joe Panagos also reached double figures for the Rams, with 14.

The Rams play conference top seed Charleston at 4:30 pm while Kelly moves to the consolation portion of the bracket with a 1:30 tip against Scott County Central.

Comments
View 13 comments
Note: The nature of the Internet makes it impractical for our staff to review every comment. Please note that those who post comments on this website may do so using a screen name, which may or may not reflect a website user's actual name. Readers should be careful not to assign comments to real people who may have names similar to screen names. Refrain from obscenity in your comments, and to keep discussions civil, don't say anything in a way your grandmother would be ashamed to read.
Respond to this story