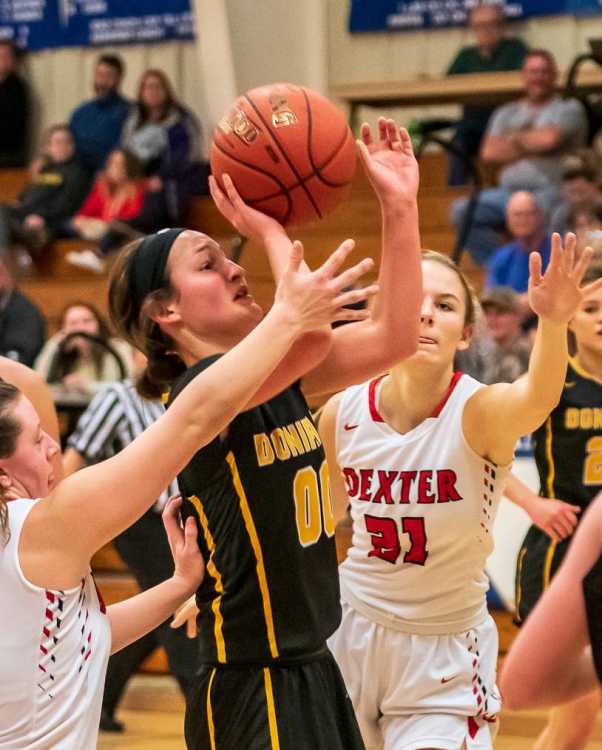 Doniphan's Jaylin Dutton puts up a shot against Dexter's Sydney Asberry and Karlee Keirsey during Monday's quarterfinal game at the Lady Royals Christmas Classic at Twin Rivers High School. Second-seeded Doniphan advanced with a 54-24 win over the Bearcats.
Steve Inman

BROSELEY - Never mind that the Doniphan Donettes were the higher seed Monday night in their quarterfinal matchup at the Lady Royals Christmas Classic.

The Donettes came out flying light against the Dexter Bearcats.

“They are hungry and they are believing,” said coach Adam Epps after his second-seeded Donettes advanced to the semifinals with a 54-24 win.

Senior guard Ady Jones scored eight points in the first 2:07 of the game as the Donettes jumped out to a 10-0 lead. The Bearcats didn’t manage to get away a shot until the 4:18 mark in the quarter while racking up 10 turnovers in the first eight minutes.

Dexter (2-7 in a rebuilding year with a new coach) saw its string of four consecutive tournament titles come to an end at the Twin Rivers holiday event.

“There’s no secret Doniphan wants to press, get after you and turn you over,” said Dexter coach Eric Sitze. “We fed that tonight by turning it over early, playing fast and getting rattled.”

Dexter shot 9-of-36 from the field and committed 31 turnovers.

“That first quarter is probably about the best defensively that I’ve seen us play,” said Epps. “It’s nice when they are buying in, working hard and being good teammates.”

Jones led Doniphan with 10 points with the early eight coming on a putback basket, a 3-for-3 effort at the free throw line after being fouled on a 3-point shot, followed by a 3-pointer.

Doniphan has won five consecutive games since finishing third at the Van Buren Lady Dawg Classic on Dec. 6. During that streak, the Donettes are giving up 27.6 points per game.

“Defense is the key,” said Epps.

The semifinal matchup against the Naylor Lady Eagles will be the first meeting between the Ripley County rivals this season. A game set for Dec. 16 was postponed.

“We are excited to be playing Naylor,” said Epps. “We had a bit of a hiccup (in the quarterfinals) here last year. We’ve learned from that and have grown. Once again, defense is the key.”

Naylor handed Doniphan a 40-27 loss in last year’s quarterfinals. The Donettes and Lady Eagles have met six times over the past two seasons with the series tied at 3-3.

The winner advances to Saturday’s championship game against either top-seeded Neelyville or New Madrid Co. Central.

Doniphan last appeared in the Lady Royals Christmas Classic championship game in 2006. The Donettes won the LRC six times between 1998-2006 but have since finished no higher than fifth.

Naylor has reached the championship just one time in 22 years (2008) and is looking for its first title in the Christmas tournament. The Lady Eagles best finish in recent years was third place in 2015.