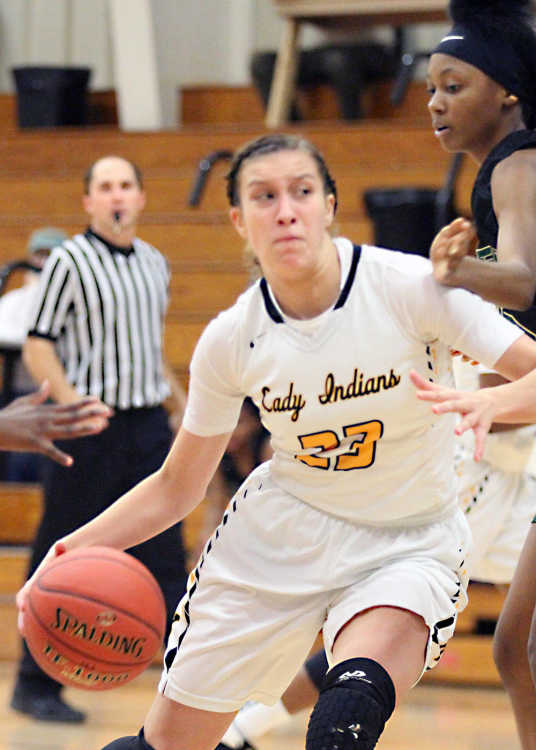 BROSELEY, Mo. - Midway into the third quarter, it looked like a varsity girls basketball game between the Kennett Indians and New Madrid County Central Eagles might come down to the final shot for a second time this season.

A 2-pointer by Kennett’s Caroline Patton cut New Madrid County Central’s lead to 28-23 with 4:05 left in the third period.

“I thought we were right where we needed to be at halftime down six and then we got it to five midway into the third quarter,” Kennett coach Aaron New said. “But then they made a run in the second half and we didn’t have an answer.”

The Indians recorded just one field goal in the final 12 minutes of regulation.

No. 4 seeded New Madrid County Central ended the game on a 19-2 run as it beat No. 5 seeded Kennett 47-25 in a quarterfinal of the Lady Royals Classic Monday evening.

“We finally started anticipating a little bit and reading the passing lanes better,” New Madrid County Central coach Toby Heeb said. “The first half we were really stagnant and just didn’t move well defensively. Our big talk at halftime was rebound better and get out in passing lanes. We wanted to try to get some offense going from our defense because it’s tough to score against their zone.”

New Madrid County Central, which won the first meet against Kennett by one point on Dec. 12, scored frequently in the opening quarter as it jumped out to a 12-2 lead after just four minutes of play.

Shakyra Wright, who finished with a team-high 18 points for the Eagles, helped fuel the strong start by scoring eight of her squad’s 15 points in the first quarter.

Kennett managed to cut the early double-digit deficit to 15-9 by the start of the second quarter and continued to trail by six at 22-16 at halftime.

“The first quarter we came out and played the way we wanted,” Heeb said. “Then our energy went down. Then Kennett picked it up and closed the gap.”

“it’s funny,” Heeb said. “We come out one game and hit six or seven 3’s. Then the next game we can barely hit the rim. Tonight was one of those nights we hit a few outside shots. When we do that we are tougher to guard.”

Taleigh Harrell, who paced Kennett with eight points, was the only player to record multiple field goals in the second half for the Indians. She hit one 2-pointer in every quarter to finish with eight points.

Katara Raiford and Patton were the next highest scorers for the Indians with seven points each.

“We got through tough scoring droughts and had another one tonight,” New said. “Our intensity level was not good and we didn’t rebound. Then we just fell apart midway through the third quarter. We were right in the game until that point.”

“Another big, physical team,” New said. “Teams that are big give us problems because we struggle rebounding inside so it could be a tough game for us."

New Madrid County Central (6-1) takes on No. 1 seeded Neelyville (7-2) in a championship semifinal Friday at 6 p.m.

“They are the No. 1 seed in this tournament for a reason,” Heeb said. “They’ve got a great program with good coaching and good players. We played them last year and they put it on us pretty good but neither team is quite the same as last year. It should be a good game if we can take care of the ball because they press well.”