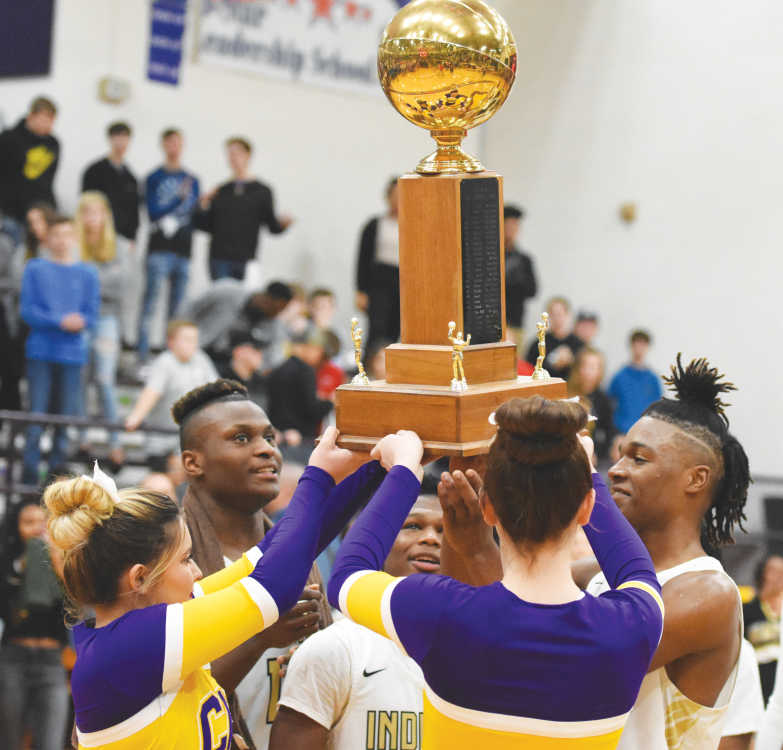 BLOOMFIELD — High school athletics goes through cycles when it comes to experience and youth.

Eleven of the 12 players named to the all-tournament team graduated. Only Kennett’s Quayv’aun Harrell returns.

Harrell’s Indians are the exception. Six Indians are seniors and because of that experience, they drew the top seed for the tournament that begins Thursday and runs through Monday.

“We were in that situation last year with our kids,” Kennett’s second-year Andrew Halford said of having a young, inexperienced roster. “We’re fortunate to have those kids return with that experience from last year. Playing all four nights (last year) is a big deal. These kids have a little bit of experience seeing this place on the final night, seeing the atmosphere. Hopefully, that translates to this year.”

The Indians carry a 6-2 record into tournament after beating No. 8 Malden and No. 6 Doniphan last week. Both losses occurred in the SEMO Conference tournament.

“We’ve played a difficult schedule starting the year out,” Halford said. “Started out fairly well with the exception of these last couple of games against Cape Central and Charleston. We’re excited to come here and get a chance to compete in this tournament.”

“Kennett is definitely deserving of the top seed,” Allen said. “They’re an extremely good team, well coached. They’ve got a lot of players back from last year. They looked really good in the SEMO Conference tournament. I know they’ll do well here in the Christmas tournament.”

Kennett finished fourth in the SEMO Conference tournament after upsetting second-seeded Notre Dame in the first round and won the Gideon tournament the previous week.

“Our main goal is we want to play all four nights,” Long said. “Seeds are just part of the process. We want to keep working hard, keep practicing hard, keep trying to play as well as we can play. Everything else will take care of itself.”

For Allen, the tournament offers an opportunity for his young squad to get experience. The Bearcats have only two seniors — Garrett Henson and Logan Wyman.

“We’ve still got work to do,” Allen said. “The more games we get underneath our belt, we’ll get better and better as the year goes on. We’ve got a lot of new guys this year that haven’t had any varsity experience.”

The Bearcats have won two of their previous three games after an 0-3 start.

Notes: Harrell averaged 13.8 points in four games in the 2018 tournament. … The Indians are 2-0 against the tournament field, beating No. 6 Doniphan 59-43 and No. 8 Malden 56-37. … They won the Gideon Bulldog Classic and finished fourth in the SEMO Conference tournament. … Kennett has won nine BCT championships.

Notes: The Mules won their own invitational, knocking off a pair of state-ranked opponents, including a 67-62 win over No. 10 Campbell in the title game. Bernie is ranked No. 8 in the most recent Class 2 state coaches poll. … Bernie has been a 3-point shooting machine this season, making 11 or more in three games including 18 in a lop-sided win over Woodland.

Notes: Henson averaged 11.7 points in three BCT games in 2018. … Ellinghouse leads the Bearcats with a 12.5 points-per-game average, scoring in double figures in four of six games. … The Bearcats have won a BCT-best 11 championships

Notes: The Bulldogs return three starters and are relying on sophomores to be role players. … Hicks averaged 11 points over four games in last year’s tournament. … The Bulldogs are 2-0 against the tournament field, beating No. 9 East Prairie 71-61 and No. 15 Holcomb 62-44.

Notes: In last year’s tournament, Moore averaged 12.8 points in four games and Reed averaged 10, but both are ineligible until the new year. … The Indians finished third in the Gideon Bulldog Classic. … Hayti lost 83-68 to top-ranked Dora on Thursday.

Notes: The Bulldogs may be the most experienced team in the field because four of their top six players from last year are back. … Jackson posted the tournament’s top scoring average last season. He scored 58 points in three games, averaging 19.3. … Van Buren has faced one tournament team so far, losing 50-48 to No. 6 Doniphan.

Notes: The Eagles have played only one of the tournament’s 16 teams, losing 71-61 to fourth-seeded Portageville. … The Eagles are coming off three straight winning seasons. The last time they had that type of success was five straight winnings seasons from 1982-86.

Coachspeak: “We have some size but we’re not scoring the ball well right now,” McBroom said. “We rebound OK.”

Notes: The Wildcats’ first four opponents are competing in the BCT. They beat No. 11 Twin Rivers 53-47 in overtime and lost 71-31 to No. 2 Bernie, 60-56 to No. 10 Gideon and 56-54 to No. 14 Puxico. … Post Jamison Dodd has been the Wildcats’ most consistent performer this season, averaging 13 points per game and is the only player to score in double figures in every game.

Coachspeak: “We have a lot of experience but we’re very young,” Snider said. “Our best players are freshmen and sophomores. Our upperclassmen are role players.”