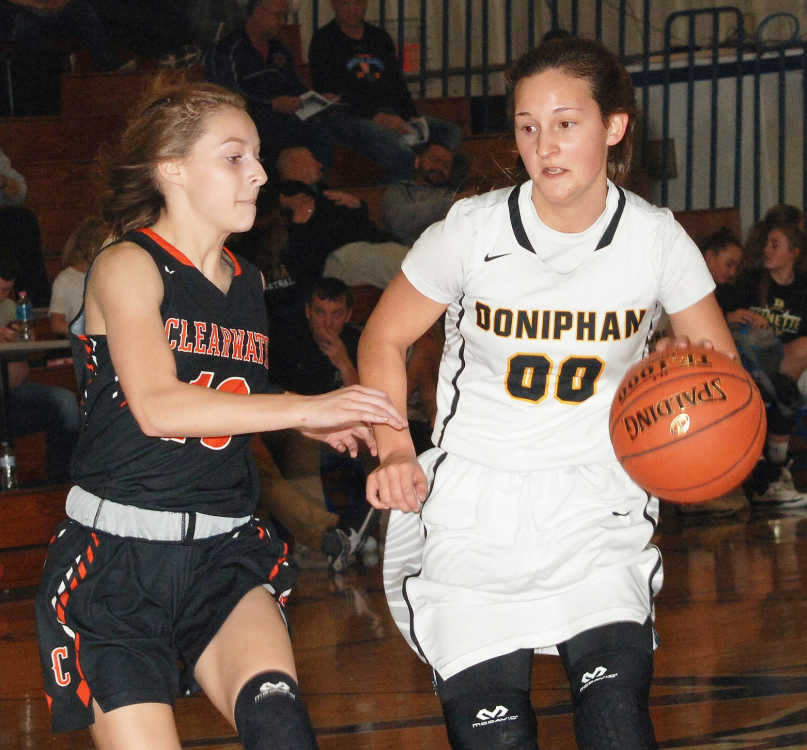 Doniphan, the tournament’s No. 2 seed, scored the game’s first 35 points and kept the 15th-seeded Lady Tigers off the board until the final two minutes of the first half on the way to a 55-15 victory in the final game of the opening day of the Lady Royals Christmas Classic.

“We really rely on our defensive game — and it worked pretty good for us tonight," Doniphan coach Adam Epps said after the game. “Our first five didn’t get a lot of time, but when they were in there, they were executing and they were gettng better."

The Donettes took a 25-0 lead on Brooklyn Klepzig’s 3-pointer in the closing moments of the opening period, then kept up the heat in the second quarter. Emily Ederer hit a basket with seven minutes left in the first half to make it 29-0, then added a three-point play at the 5:16 mark of the period to make it 32-0.

“These are the types of games that you’ve got to be really, really mentally prepared for as a player, because sometimes it's hard to stay up and go with the same intensity," Epps said. “We played our second unit quite a bit tonight and they got quite an opportunity out there to get better as well."

Clearwater finally got on the board when Ayla Keller hit a basket with 1:58 left in the half, then Amy Holmes added a basket 35 seconds later to cut the Donettes’ lead to 38-4.

“It was a rough game," Clearwater coach Cheryl Dean said afterwards. “We struggled on offense and on defense."

Klepzig led the Donettes with 20 points — including four 3‘s — while Ederer added 13 in the win.

“She’s a really good shooting freshman for us," Epps said of Klepzig. “That was her first breakout game where she hit some shots in a varsity game. ... That was good for her tonight because we really need that, because we are going to have some teams that are going to make us shoot it later in our schedule."

Doniphan will face seventh-seeded Dexter in a quaterfinal contest Monday at 7:30 p.m., while Clearwater takes on No. 10 East Carter in consolation action on Monday at 1:30 p.m.