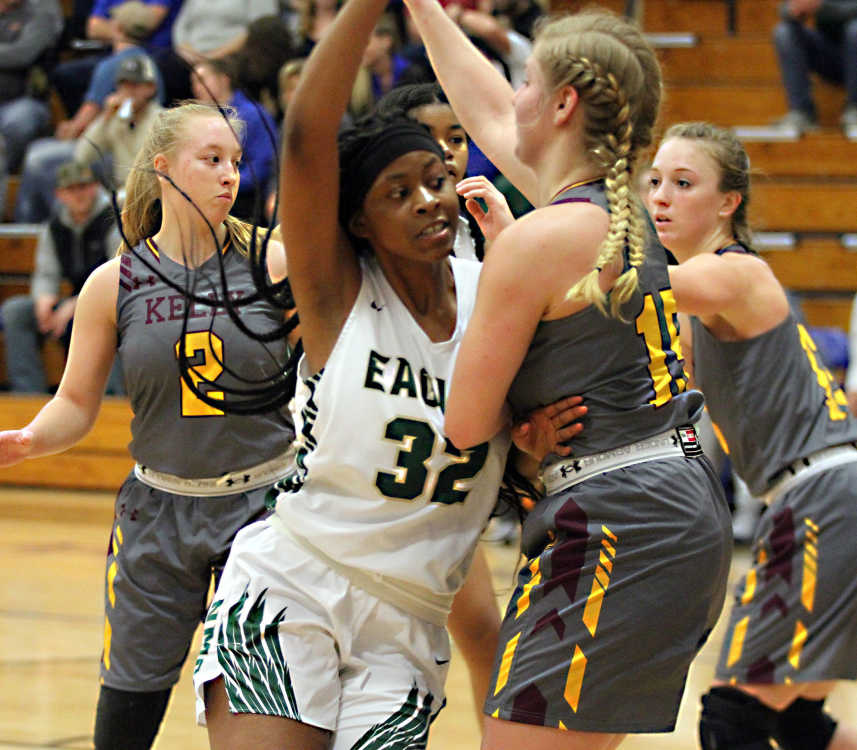 Photo by Dustin Ward, staff
New Madrid County Central’s No. 32 Mastajah Walker and Kelly’s No. 15 Mallory Glastetter fight for positioning in traffic Saturday in a first-round contest at the Lady Royals Classic at Twin Rivers High School in Broseley, Missouri.
Order this photo

BROSELEY, Mo. - New Madrid County Central Eagles coach Toby Heeb went back to the drawing board at halftime of his squad’s contest against the Kelly Hawks Saturday.

But he didn’t draw up a play.

“All I wrote on the board was rebound,” Heeb said. “I knew if we rebounded we would find a way to win and luckily when it really mattered we attacked the glass.”

The advice appeared to pay off in clutch time for the Eagles.

Seven of the final nine points the Eagles scored were second-chance points. The extra rebounds helped No. 4 seeded New Madrid County Central edge the No. 13 seeded Kelly Hawks 52-47 in overtime in a first-round contest at the Lady Royals Classic.

“We showed a little resiliency,” Heeb said. “This group has not been down a lot late in games. This was the first overtime they have ever played. It’s nice to see they were able to find a way to win it."

Overtime became necessary in the instant classic after Kelly senior Mallory Glastetter made a pair of free throws with four seconds left in the fourth quarter to tie things up at 43-all.

“That’s her spot,” Kelly coach Darrin Pruitt said. “She loves to shoot the ball from 15 feet out. It was nice to have her on the line right there and finish those for us.”

Alaney Moore, who scored a game-high 26 points for Kelly, followed with consecutive 2-point field goals to tie things up again at 47-all with 1:39 left.

Mastajah Walker made one of two free throws with 1:16 left and a pair of free throws with 47 seconds left to put New Madrid County Central back on top 50-47. All of Walker’s free throw attempts came when she was fouled after her team collected an offensive rebound in the paint.

Kelly had three shots to tie things up in the final 45 seconds of overtime but all three treys did not fall.

“We were right there with them. We just need to find a way to take care of the ball a little bit better and finish shots,” Pruitt said. “But they are a good team. We played them in the district championship last year. I know they are missing a few players tonight. We tried to take advantage of that. We got to overtime and wanted it really bad. We just couldn’t finish it.”

New Madrid County Central and Kelly were tied at 13-all after one quarter before the Eagles moved ahead 23-18 at halftime and continued to lead 33-30 at the end of the third quarter.

Kelly took a brief 37-35 lead when Allision Owens made a pair of free throws with 3:07 left in the fourth quarter.

The Eagles scored the next five points on a 2-pointer by Hester and 3-pointer by Wright to move back ahead 40-37 with 2:00 left in the fourth quarter.

New Madrid County Central increased its lead to 43-39 in the final minute of the fourth quarter. Kelly followed with four points in the final 30 seconds of regulation to force overtime time.

“We were right there,” Pruitt said. “There is a thin line and we just have to find a way to step over that line and get a win.”

“It was balanced tonight,” Heeb said. “We’ve had a couple players score in the 20’s the last few games. Shots weren’t really falling tonight so everyone found a way to get a few points to cover some slack there.”

“We’ve got two starters out and two bench players at home sick,” Heeb said. “We are limited in bodies right now and are having to find creative ways to win."