Kennett recovers from slow start, beats Portageville 55-33 in first round of LRC 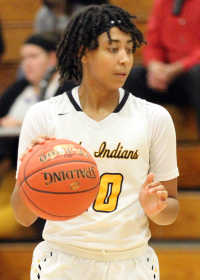 BROSELEY, Mo. - The No. 5 seeded Kennett Indians didn’t put together its best performance of the season but still found a way to escape with a win against the No. 12 seeded Portageville Bulldogs in an opening-round contest at the 16-team Lady Royals Classic Saturday. 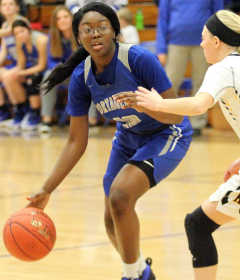 Kennett outscored Portageville in each of the final three quarters after losing the first quarter by three points on its way to a 55-33 win at Twin Rivers High School in Broseley, Missouri

Kennett, which trailed 8-5 after one quarter, scored the first dozen points of the second quarter to move ahead 20-8 with a little under three minutes left in the first half.

Kennett continued to lead by 12 at 22-10 with one minute left in the second quarter before Portageville knocked down three consecutive 3-pointers to cut the deficit to 22-19 at halftime. The 9-0 spurt included a 3-pointer by Hailey Tipler and a pair of treys by Garielle Madison.

“We have some shooters on our team but we aren’t real confident sometimes,” Portageville coach Kellye Fowler said. “I think hitting one gave the other girls more confident and we got hot and made a few.”

“I thought we played well in spurts,” Fowler said. “We came out flat in the second half. We had a really bad third quarter and just couldn’t get things going after that.”

Caroline Patton was one of three Kennett players to score in double digits. She made five 2-pointers, a pair of treys, and six free throws on her way to a 19-point performance.

Madison paced Portageville with 18 points. She scored 14 points before halftime.

“They are in our district,” New said. “We had a nice game with them the first time. Again, we have to give a better effort than we did today. Otherwise, we are going to struggle.”