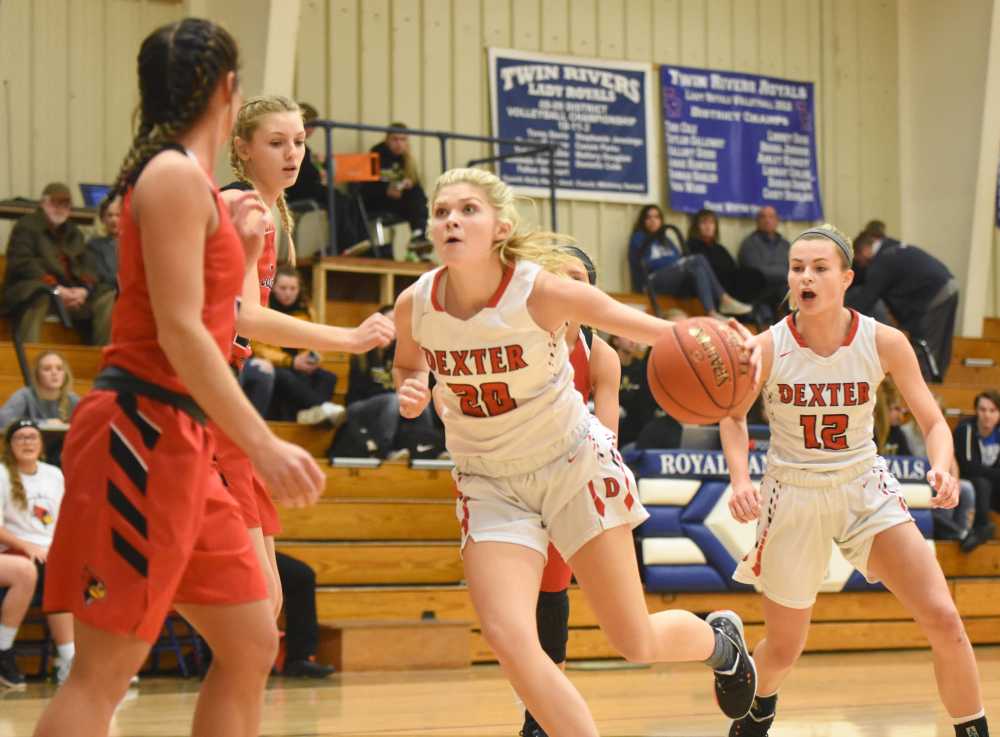 Dexter’s Caitlin Giles (20) drives toward the basket against East Carter in the first quarter of the first-round matchup of the Lady Royals Classic on Saturday at Broseley.
DEXTER STATESMAN/Kyle Smith

BROSELEY — While the defending Twin Rivers Lady Royals Classic champion Dexter Bearcats didn’t receive the top seed this year, they recorded another lopsided victory in the tournament’s first round.

The seventh-seeded Bearcats used their pressure defense to push the tempo and controlled the boards in the first half en route to a 65-25 victory over 10th-seeded East Carter.

The Bearcats were the tournament’s top seed last year and crushed 16th-seeded Clearwater 90-23 in the opening round.

Dexter used a 15-0 run in the first quarter to take an 18-4 lead. Alexa Werneck scored eight of her game-high 23 points during that stretch. The Bearcats went 10 of 14 from the field, including 1 for 3 from 3-point range, in the first.

East Carter went 3 for 9 from the field but committed 10 turnovers in the opening period.

“We’re going to have to do better defensively,” Sitze said. “We forced some turnovers but a lot of times we were still out of position. … The girls are still learning how to get to where they need to be, the footwork, the stance, jumping off the ball.”

Part of East Carter’s struggles was its inability to get second shots.

The Bearcats struggled at the free-throw line early in the second quarter, padding their lead by only six points while missing 7 of 9 free throws.

East Carter cuts its deficit to under 20 points (30-11) on a free throw by Autumn Payne and two by Audrey Carter.

Dexter scored the next 10 points to push its advantage to 29. Four of the five Dexter field goals came on assists, as the players looked for an open teammate. Caitlin Giles, who finished with 11 points, scored a pair of baskets and Magi McBride had two field goals to give the Bearcats a 40-11 lead. Werneck ignited the rally by finishing a feed from Mikayla Dodson.

Naomi Crowley went on a personal 5-0 run and Carter scored on a fast break before the Bearcats tallied the final six points of the half to take a 46-18 lead into halftime.

Crowley finished with a team-high 13 points.

The Redbirds committed 10 turnovers in the second quarter.

“Part of pressing is trying to push the tempo,” Sitze said. “We need to play that way but we can’t give up easy ones on the back side of it. I felt like we gave up a lot of points (that way tonight).”

“She’ll be our inside,” Sitze said. “She’ll finally give us a little bit of inside presence. She rebounds well for us. She’s long so she can change shots. She shot it really good for us this summer.”