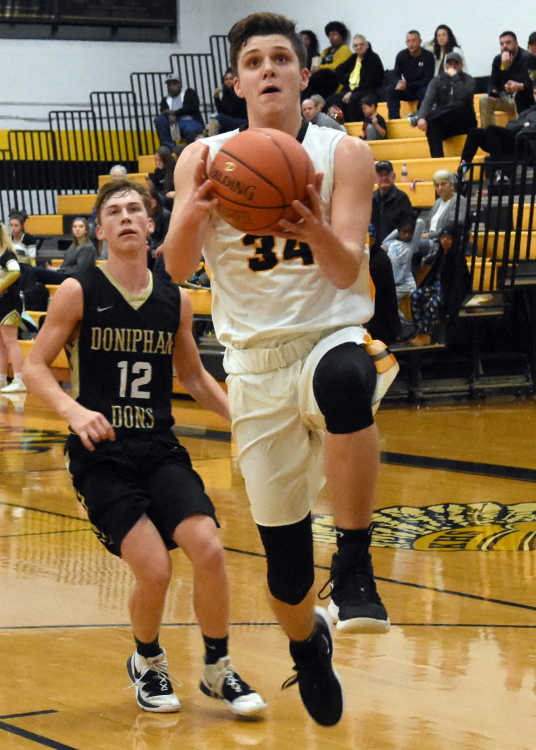 Photo by Johnathan Jain, staff
Kennett's Ben McMullan goes up for a layup in a varsity boys basketball game against Doniphan Friday night.
Order this photo 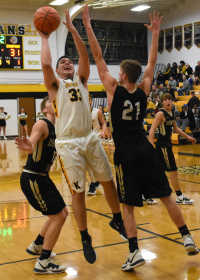 Doniphan guard Ethan Jones started the game red hot. He recorded the first nine points for Doniphan as he made three 3-pointers to start the game. 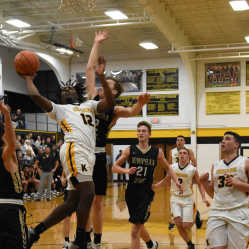 Midway through the first quarter, the Indians implemented a full-court press.

“We tried to create some turnovers with our press. Once we dropped back, we just had to understand where their shooters were on the floor and react quickly to them,” said Kennett coach Andrew Halford. “We did not do that in the second half against [Tristian Bryant]. He had four 3-pointers in the second half.”

The three-point shot proved to be a crucial for both teams. Each team made eight 3-pointers throughout the game.

Kennett’s Ben McMullan had four 3-pointers, Jackson Henfling had two, and Kobe Gates and Marsayv’aun Harrell each had one.

Doniphan’s Bryant had five 3-pointers and Jones had three for the Dons.

The Indians had four players in double figures. McMullan had 21 points, Harrell had 17, and Gates and Henfling each added 10 points to Kennett’s total.

“It’s always important to have guys in double figures,” Halford said. “Anytime you have guys that are putting the ball in the basket it helps.”

Bryant was Doniphan’s leading scorer with 21 points. Jones had nine points and Levi Rawlings added eight points for the Dons.

Kennett is now 6-2, including an impressive 70-66 win over Notre Dame.

Kennett is currently ranked No. 8 in Class 3 in the latest poll.

“We’ve had a heck of a start to the year,” Halford said. “It’s one practice, one game at a time. We’re just going to keep focused on what’s right in front of us and not get too far ahead of ourselves, even though we understand what our end goal is with that district championship.”

“Simply put, Doniphan’s over. On Sunday we will get ready for Richland. Once we get done with Richland, we prep for the next team,” Halford said. “We’re very excited. We’re looking forward to going and competing at a high level.” 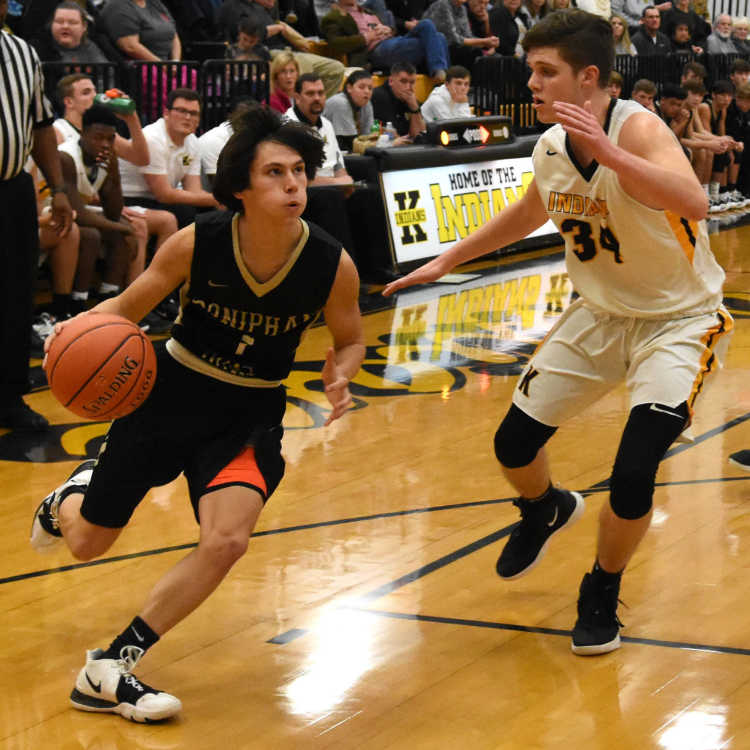 Photo by Johnathan Jain, staff
Doniphan's Tristian Bryant drives to the basket in a varsity boys basketball game at Kennett Friday night.
Order this photo
Respond to this story