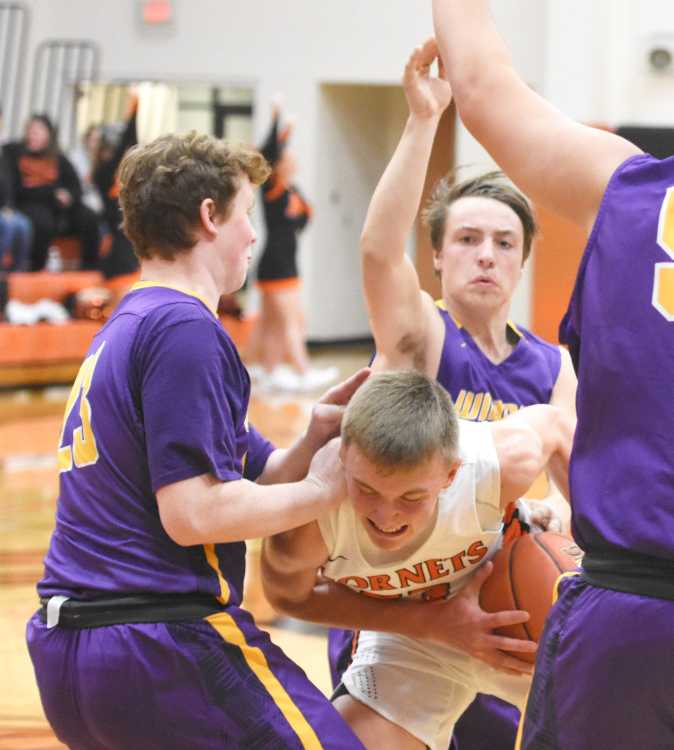 ADVANCE Ś The Advance boys basketball team turned up the heat in the second quarter.

ôIt was about the only quarter where we played well,ö Advance coach Bubba Wheetley said. ôWe played pretty good that quarter. We did a lot of good things. We didnĺt shoot the ball that bad.ö

After Jamison Dodd scored on a feed inside by Gage McNeil to open the second quarter, the Hornets scored 23 of the next 27 points to take a 42-20 halftime advantage.

The Hornets (5-1, 3-0 SCAA) shot 70% inside the arc in the second, attempting 16 total shots compared to Bloomfieldĺs seven.

Senior Jack Below ignited the rally with a baseline jumper and a 3-pointer to extend the Hornetsĺ lead to 24-16.

Freshman Hayden Laird scored the next six points, and Advance took a 30-16 lead. Laird converted a turnover into a layup, sank two free throws and sank a jumper following an offensive rebound.

Bloomfieldĺs Brandon Wright made two free throws to interrupt the Hornetsĺ run, but sophomore Jaren Schrader scored on a pass from Below and junior Landon Dailey scored on a steal and layup, pushing their lead to 34-18.

The Wildcats (1-4, 0-1) missed the front ends of back-t0-back one-and-one opportunities before Dodd scored inside to cut Advanceĺs lead to 34-20.

Freshman Jack Bailey made a free throw, Hunter Curtis sank a 3-pointer, Dailey scored on a jumper after pass from Below and Laird scored on a layup following a Bloomfield turnover with 4.4 seconds left.

ôWe didnĺt cut at all at times when we were trying to run something on offense,ö Bloomfield coach Brandon Crook said. ôWe were trying to get something out of cutting to the middle of their zone. I felt like we did a decent job of that basically every quarter except that second quarter.ö

Three Advance players scored in double figures with Below and Dailey scoring 16 points each. Curtis added 11 and Laird had nine.

Below not only shared team-high honors in scoring but he was a playmaker for his teammates.

ôHe has to do that,ö Wheetley said. ôHeĺs got to be that guy who can get the ball to people. We canĺt win with him just scoring a lot.ö

The Hornets took the lead for good when Dailey finished on a pass inside from Below for a 10-9 lead.

ôWeĺre still trying to work to get better,ö Wheetley said. ôWeĺve got a long way to go. Weĺve got a lot of kids in there that Iĺm playing that are young. They make a lot of mistakes but Iĺm hoping we get better throughout the year.ö

The Wildcats didnĺt fold in the second half, outscoring Advance 30-25.

ôThatĺs something we talked about (at halftime),ö Crook said. ôWe wanted to respond. We didnĺt want to just roll over. I feel like we did a pretty good job of that. (We) came out and kept fighting and won the second half. That says something about our team.ö

Jeffrey Jarrell and Colton Hyslop scored seven points each in the third period for the Wildcats, who trailed 58-37 entering the final quarter.

Bloomfield sliced its deficit to 17 points late behind a 9-0 run that featured a putback by Parker Heaton, a fast-break layup by Jarrell and a 3-pointer by Hyslop, who paced the Wildcats with 13 points.

ôWeĺve got to close it out,ö Wheetley said. ôWe tend to lose our intensity. Of course, I did throw some kids in there. ů We talked about it at halftime. Youĺve got to finish them out and we didnĺt.ö