PERFECT AGAIN: Jones leads NMCC to win over Sikeston, and another perfect season 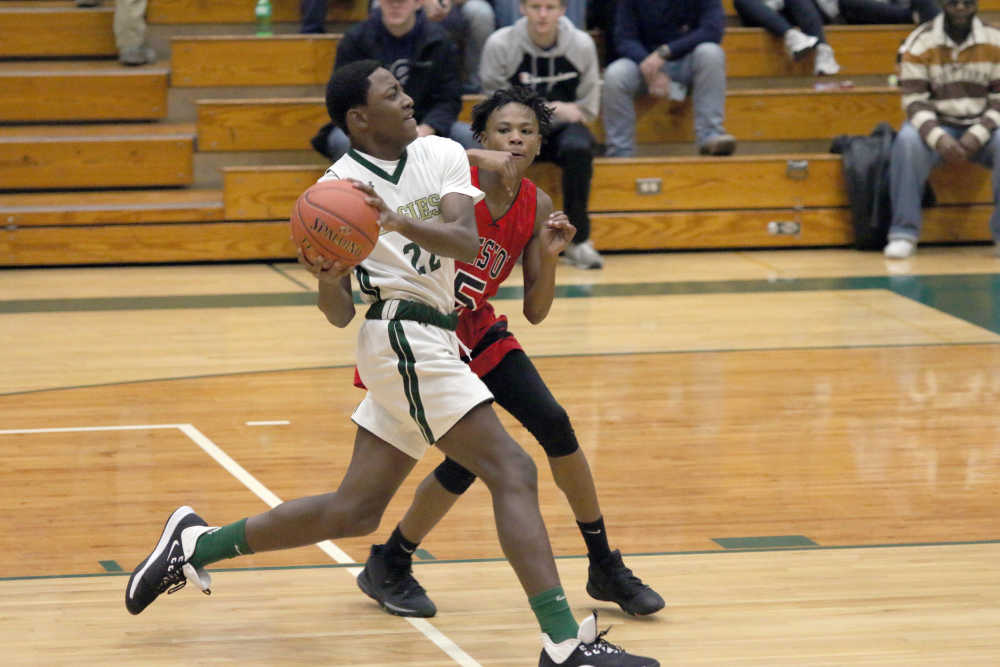 NEW MADRID, Mo. — For the second-straight season, the New Madrid County Central eighth-grade boys’ basketball team finished without a blemish on the schedule.

On Thursday night, the Eagles defeated Sikeston 63-34 at New Madrid County Central High School to finish 13-0 for the second-straight season.

“It means a lot,” said NMCC eighth-grade head coach Dontre’ Jenkins on his team’s accomplishment. “These kids have put in a lot of work and a lot of hours when they come in and doing the unseen stuff. Getting some shots up and working on skills. To do this in back-to-back seasons is special. It doesn’t happen all the time.”

“We had trouble with their press,” Sikeston eighth-grade head coach Derek James said. “We worked on it quite a bit, and I knew it would be a problem for us. They pressured hard up-top, and we had trouble getting it across half-court, and they scored a lot of transition off that.”

Jadis Jones was a major reason why the Eagles got out to such a hefty lead, scoring 17 of his game-high 21 points in the first half. He finished 9 of 19 from the floor and grabbed 11 rebounds as well.

AJ Ruff added 14 points, while Yancey Johnson and BJ Williamson each had 11. Kayden Minner, Julian Courtois, and Dearious Newsom all finished with two points as well.

Having his players grow over the summer physically is a bonus, but adding players isn’t a bad thing either, and for Jenkins, the moment his newcomers moved in, the chemistry was instant.

“They came in even better this year,” Jenkins said. “Had a couple of move-ins, and that helped us out a little bit too. When those move-ins came in, they gelled. You don’t get that all the time, and you could see that on the floor.”

Despite a lopsided halftime deficit, the Bulldogs did battle in the second half.

Sikeston tied NMCC at 21 through the final two periods.

“Once we got it across [half-court], we got some good shots,” James said. “When we had shots, I wanted us to take them, I didn’t want us to pass up on any open look, and you saw once we started doing that in the second half, we started making shots.”

Tristan Wiggins led the way for the Bulldogs for the remainder of the game. Wiggins scored all nine of his points in the second half, on 3 of 6 shooting, to go along with six rebounds as well. 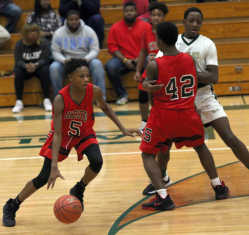 “These guys have been a joy to coach,” James said. “They’ve worked hard all year. I cannot fault their effort in any game we’ve played. We made a lot of strides this season from the beginning to the end. I know the scoreboard didn’t reflect it tonight, but this team improved every game, and I’m happy to see that.”

In the seventh-grade game, Sikeston used an 18-2 second quarter to separate itself from NMCC. The Bulldogs led 25-8 at halftime and won 47-32.

Torres scored six of his eight points in the first half, while Chris Artis and Dontayvious Wright each had five. Artis led the team with 11 points.

Clarence Howard led the Eagles with 14 points. Ra’Mond Brooks and JD Harris each had seven, while Alex Novel and Ryleigh Hardin both finished with two.