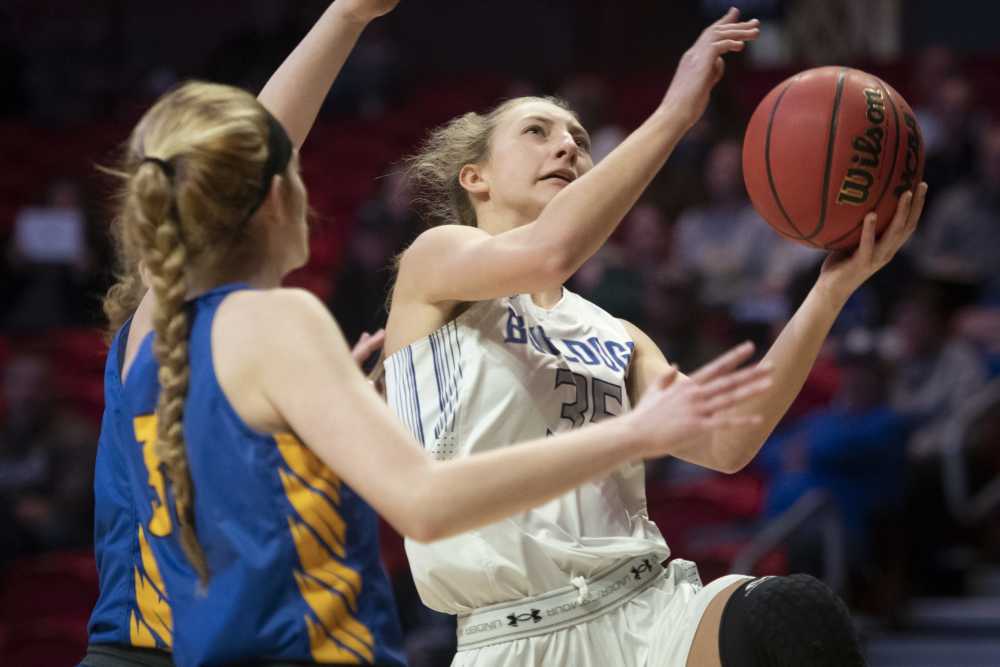 Notre Dame's Tori Rubel (35) drives to the basket against Oran during the semifinals of the Holiday Classic on Thursday at the Show Me Center. Notre Dame won 49-39.
Jacob Wiegand
Order this photo

With the win, the Bulldogs improved to 6-2 and advanced to Saturday night's championship game against Jackson at 6:30 p.m.

"As much as we turned the ball over, I'm surprised we only lost by 10 points," said Oran coach Ethan Evans, who saw his team lose for the first time this season.

"In the first half (Webb) was getting a lot of touches," said Notre Dame's skipper Kirk Boeller, "and we had some late success in guarding her. (Webb) is a great player, phenomenal, and we had our hands full."

Evans had to tip his cap at Boeller's strategy.

"You know they did take (Webb) out of the game," said Evans, "so we had to find someone (else) open to knock down the jump shot."

For the losing Eagles coach, the defeat came down to turnovers and the failure to rebound better.

"We got worked on the boards a few times for sure," said Evans.

It was a six-point game at the half, Notre Dame ahead 28-22, but the third quarter turned the tide the Bulldogs direction.

Notre Dame extended its lead to double figures, 44-31, by the start of the fourth quarter.

"It was close at half," said Boeller, "but we came out (in the second half) with intensity. I'm happy at the way we responded."

Oran outscored the Bulldogs in the second and fourth quarters while Notre Dame had the better of the Eagles in the first and third.

Both teams fouled out players in the waning moments of the contest.

Boeller said his players were getting tired in the final eight minutes.

"Part of (the tiredness) is we're not used to the bigger floor," Boeller said about the Show Me Center surface. "Our gym is quite a bit smaller and when we worked our press (defense), the girls' legs were a little wobbly."

"(Actually), a bigger floor should have helped us with their press," said Evans.

"(Notre Dame) is a really good Class 4 team," continued Evans, "and I thought we hung close."

Boeller says he knows what his team needs to work on before Saturday's title game.

"We will work on our communication on defense," said Boeller, "(because) there's a lot of room for improvement there."