Jackson survives without offensive force - for a while 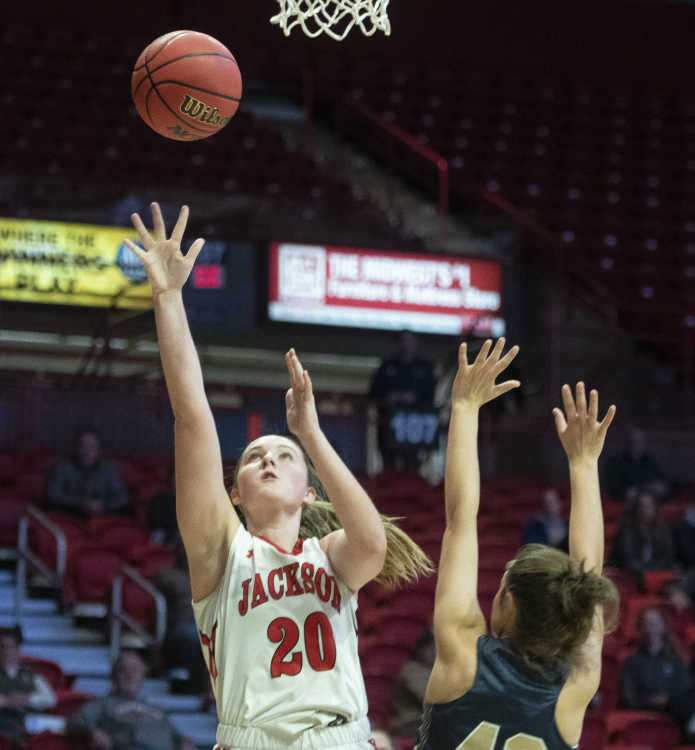 Jackson's Madison Lambert (20) puts up a shot while guarded by Saxony Lutheran's Alice Hogendobler (40) during Jackson's 59-54 win over Saxony Lutheran in the semifinals of the 2019 First State Community Bank Holiday Classic Girls Basketball Tournament on Thursday at the Show Me Center in Cape Girardeau.
Jacob Wiegand ~ Southeast Missourian
Order this photo

Jackson girl’s basketball coach Tyler Abernathy walked out of the Show Me Center Thursday night confident in several things concerning his squad, but nothing more so than the Indians are far from a one-girl team.

Jackson utilized an impressive amount of offensive depth in its 59-54 semifinal victory over Saxony Lutheran in the First State Community Bank Holiday Classic.

The Indians advance to play Notre Dame in the championship game Saturday at 6:30 p.m.

Three minutes into Thursday’s game, Jackson junior Madison Lambert, who is the focal point of the Indian offense, picked up her second foul as the Indians led 6-4.

“Some kids are going to have to step up,” Abernathy said of his thoughts at that moment. “You don’t want that (foul called), but at this time of the year it is about learning and we had to have some kids step up.”

Abernathy initially planned to take a wait-and-see approach to when he would reinsert Lambert back into the game, but his players continued to execute to his satisfaction and so it became more of a wait-and-keep-waiting strategy.

“I didn’t plan on sitting her the whole (second quarter),” Abernathy said. “I really planned on putting her back in.”

Saxony (5-3) went on a 5-0 run late in the first to stretch its advantage to 11-8, but Jackson freshman Katie Waller scored on a drive to close the opening quarter and so Abernathy decided to keep showing patience.

Not only did the Indians (6-1) survive without Lambert, to a degree, they thrived.

Six players beside Lambert scored points in the first half for the Indians, as they took a 28-27 lead into the intermission.

“I was really impressed,” Abernathy said. “We had a lot of kids step up offensively.”

Junior point guard Olivia Ward had eight points in the first half sophomore Isabella Hermann had four, as did senior Piper Guilliams and freshman Katie Waller.

“That was big for us to hang around and not rely on her,” Abernathy said.

However, at some point talent has to be utilized and to start the third quarter, Jackson made no secret as to what it wanted to do offensively.

Lambert scored the first eight points in the third quarter for her team, as the Indians took a 39-36 lead into the final period.

Lambert scored to put Jackson up 41 36 early in the final period before putting in an “and one” to lift her team to a 44-38 margin.

She finished with a team-high 19 points, 17 of which came in the second half.

As the Indians held a slight cushion, Saxony was struggling to guard the Indians on drives and in the paint and the Crusaders continually put Jackson at the line. However, the Indians responded by hitting 9 of 11 free throws in the final quarter and 16 of 18 for the game.

“One, we have good shooters,” Abernathy said. “So they have good form. And these kids have played in a lot of big games, a lot of tight games.”

The Saxony pressure defense forced a couple of late turnovers by the Indians in the final minutes, but the Crusaders couldn’t convert after cutting their deficit to four on multiple occasions.

Ward chipped in 16 points for Jackson, while Guilliams added nine.

Saxony Lutheran will play Oran in the third-place game Saturday at 5 p.m.