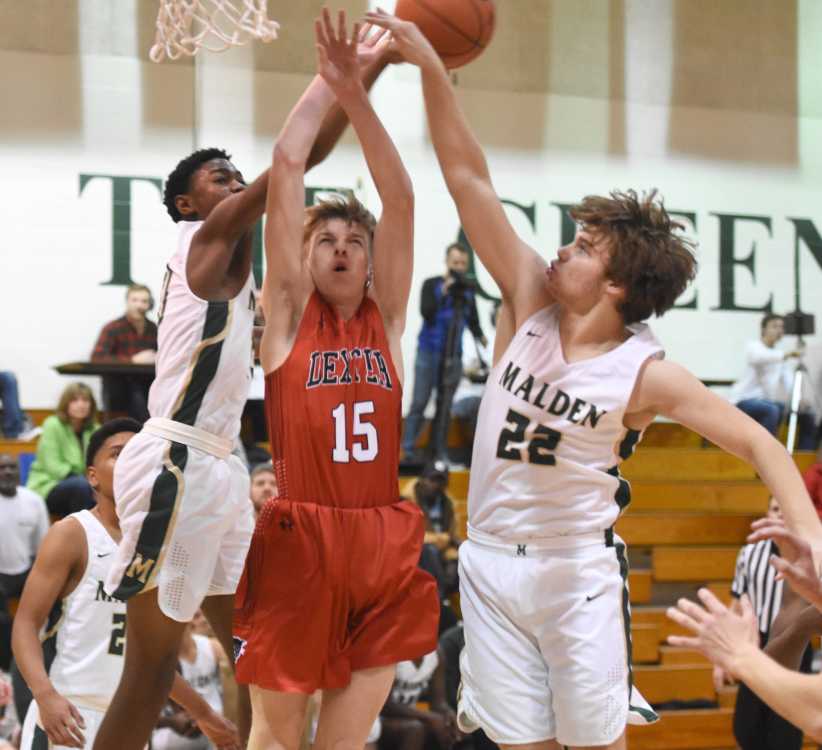 Malden's Marques Jones (left) and Drew Blankinship (right) knock the ball loose from the grasp of Dexter's Peyton Driskill (15) under the basket during the first quarter Thursday night at Malden.
DEXTER STATESMAN/Kyle Smith
Order this photo

MALDEN — The Dexter Bearcats used their motion offense and some sharp-shooting from outside to gain some separation in the second quarter.

The Bearcats, who took a three-point lead into the second, pulled away in the second half to beat the Malden boys basketball team 70-40 Thursday night at Malden High School.

“We had our best game of the year tonight,” Dexter coach Chad Allen said. “We came out flat. We didn’t hit very much that first quarter. It was a tight game, but once we started getting shots to fall, we started picking up the intensity a little bit more, especially in the second half.”

Dexter made 10 3-pointers, including three by Carter Dorton.

“In the first quarter, we were super disciplined,” McBroom said. “We did a great job of keeping them out of the middle and did a good job of pushing the ball. We played to our strengths and then we kind of went away from it. I don’t know if we got tired. … I mean we just completely played undisciplined and that’s on me as a coach. … We did not play smart basketball. We didn’t play together as a unit. Really after of the first quarter, I didn’t feel like we played very hard.”

Cole Nichols, who paced the Bearcats with 21 points, and Dorton, who finished with 11, made two 3-pointers apiece, and Ryder Boles made one in the second quarter.

Nichols scored 12 points in the second, as the Bearcats stretched their lead to 34-20 at halftime.

“They did a good job of executing,” McBroom said of the Bearcats. “They did a great job of getting to the middle and kicking out and hitting the WIDE-OPEN shot.”

Nichols’ 3-point play gave the Bearcats the first double-digit lead by either team (25-15).

Malden (2-5) fought back, though, behind a pair of baskets inside by Marques Jones, one on a pass from Sientez Lerma and one on a putback, cutting Dexter’s lead to 25-19.

Jones finished with a game-high 24 points.

Nichols’ first 3-pointer of the quarter ignited a half-ending 9-1 run.

Dexter (2-4) turned up the defensive pressure in the third quarter and used an 11-0 run to take control of the game.

“The second half, we started pressuring the ball a little more and trapping out of our defense,” Allen said. “We looked pretty good. There (are) still a lot of things we’ve got to get better at in our defense. They’re starting to show some progress now. I’m definitely excited about it.”

Garrett Henson scored on a feed inside by Dorton, and Dorton followed with a 3-pointer and layup after driving the baseline. Nichols added a layup following a Malden turnover and sank two free throws for a 52-26 lead.

Andrew Ellinghouse scored on a putback before Jones made a 3-pointer to end the quarter with the Bearcats leading 54-29.

The Bearcats stretched their lead to 30 points on a 3-pointer by Boles, and the clock ran continuously for the rest of the game.

Malden led briefly in the first quarter when Lerma scored on a pass along the baseline for a 2-0 lead and he made a free throw for a 3-2 advantage.

The scored was tied three times before a 3-point play by Ellinghouse gave the Bearcats the lead for good, 11-8 with 2:42 remaining.

JV — Brayden Pullum made a long, desperation 3-pointer at the buzzer to send Dexter to a 39-36 victory over the Green Wave. Dexter improved to 2-1.