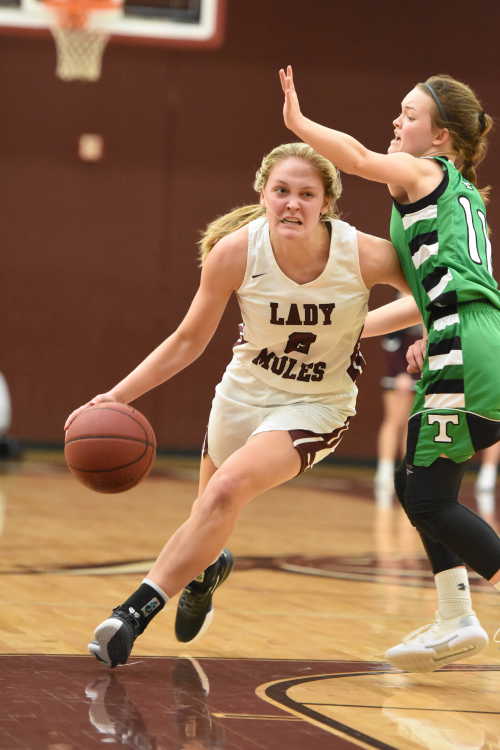 The Mules took a small lead late in the first half and let it go briefly in the third quarter, but ultimately held on to beat Thayer 45-38 on Thursday at the Senior High Gym in Poplar Bluff.

"I think we guarded well most of the game," Poplar Bluff coach John David Pattillo said. "That bunch, they know what they're doing and they do a good job of running their stuff."

After a back and forth third quarter, Poplar Bluff (5-3) led by a point heading into the fourth.

Kiley Bess, who finished with 29 points, kicked out to Katie Pattillo, who swished a corner 3 that put the Mules ahead by seven with 6 minutes to go.

Thayer's only points over the next 3 minutes were a pair of free throws. On one possession, the Mules drained more than a minute off the clock before turning it over. But they got a stop, and Hannah Bass scored to put Poplar Bluff ahead by seven again.

"We wanted to win and he told us to push. We put everything into it and wanted that win," Bass said.

Thayer cut the lead to six, and Poplar Bluff went into its spread offense, milking the clock down to 1:07 before Sierra Sievers drew a foul while trying for a putback.

She made both, Thayer answered with a pair of free throws at the other end, and the Mules successfully worked the clock down to 35 seconds before Bass stepped to the line and made one.

The Bobcats avoided fouling Bess, instead they chose to force her to pass and foul another guard despite the extra seconds that cost them.

"It is called fist. It is just mainly a pass and cut offense with a ball screen. It has worked with stalling time a lot lately," Bass said.

Thayer turned it over one final time, and the Mules burned the final seconds off the clock.

"I thought we guarded well. That's the one thing that I think we've been much better this year. We are guarding better and before this game, we weren't turning it over as much," Pattillo said. "All in all, I was really pleased with our defensive effort."

More than halfway through the first quarter, Theyer's Jurnee Rolen scored to mix things up.

Bess added a three-point play, her second of the quarter, to tie things up at 8 heading into the second.

Poplar Bluff's only points not scored by Bess in the first quarter was a free throw by Sievers.

Thayer held the Mules to one point through the first 4 minutes of the second quarter, which was a free throw from Bess, and the Bobcats took a six-point lead, which was the biggest of the first half.

Bess answered with a 3, putting her in double-digits for the game, and then added a three-point play a couple minutes later to tie the game at 15.

On the immediate inbounds pass, Bess got a steal off Poplar Bluff's press and her drive and basket put the Mules ahead for the first time in the game.

After a brief tie, Pattillo made a 3 for the Mules for the only Poplar Bluff field goal not scored by Bess in the first half, and the Mules took a one-point lead into halftime.

We've struggled shooting the ball. It is in our heads right now. We've got some good shooters. We've got 3-4, up to five good shooters. We're just playing a little tight. I encouraged the tonight, we've got to look for the 3s," Pattillo said. "We've got three girls that I know can score around the basket. It is kind of in our heads but I think the second half of the season we are going to relax and start playing a lot better."

Rolen led Thayer with 12 points and Coursey had 10.