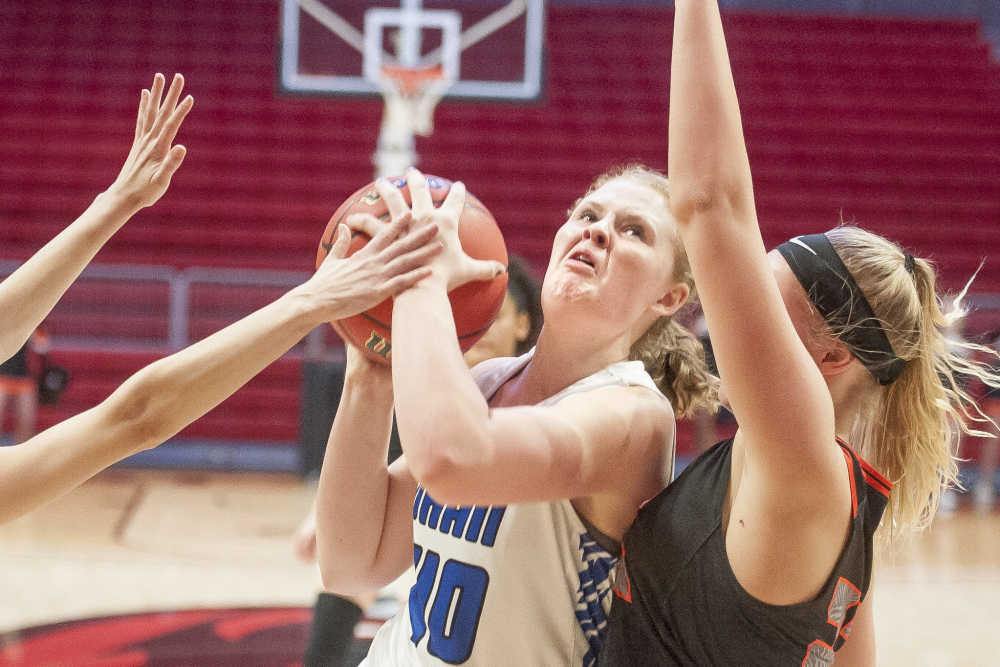 The Oran girl’s basketball coaching staff earned its paychecks during halftime of the Eagles’ game with Cape Girardeau Central Wednesday in the opening round of the First State Community Bank Holiday Classic at the Show Me Center.

After the Tigers closed the first half on a 23-12 run to take a 25-21 lead at the intermission, veteran Eagle coach Ethan Evans spoke at length during the break about one topic in particular.

“The biggest adjustment was rebounding,” Evans said. “They had 21 rebounds at the half. They had 12 offensive boards, which is way too many.”

Oran executed at both ends much better following the break and dominated Cape Central 18-5 in the third quarter and eventually won comfortably 52-37.

Oran not only rebounded the basketball to close its defensive possessions in the second half, but it also adjusted its 1-2-2 pressing defense, which gave the Tigers some pause, as they tried to figure it out.

“We’ve struggled all year with trying to take care of the basketball,” Cape Central coach Brandon Winters said. “You always give credit to your opponents. They did a great job of making some adjustments.

“They came out and pressured us a little bit more than they were and played the passing lanes a little bit better. We just didn’t do a good job of handling the ball.”

Offensively, Oran stuck to a game plan of throwing the ball into junior center Katie Webb to start the second half. She scored four of the Eagles’ initial five baskets and finished with 22 points to go with her six rebounds.

“She’s been a pretty good double-double machine for us,” Evans said. “We were definitely looking to get it into her. When (Tiger center Ella Vogel) wasn’t guarding her, I thought we could exploit that.”

The sophomore Vogel, who was All-SEMO Conference as a freshman, finished with seven points on her 16th birthday and was one of four non-seniors that Winters starts.

“She’s had a really good year,” Winters said. “A lot of the attention goes right towards her, but we’ve had some other girls start to step up and make shots.”

Senior Yeniah Jackson came off the bench to score eight for Cape Central (3-2), as did freshman Taylor Horton.

For the Oran girl’s basketball program, it is in a prolonged “stretch” of being pretty good.

The Eagles are in the midst of their seventh straight winning season and will be going for their seventh consecutive Class 2 District 2 championship.

“It starts with the elementary level,” Evans said of building his program. “We’ve got a pretty good elementary program down there. We’ve been blessed with some good athletes and if we put two or three together from each class, that helps us.”

The Eagles also finished the game in impressive fashion by hitting all 10 of their free-throw attempts.