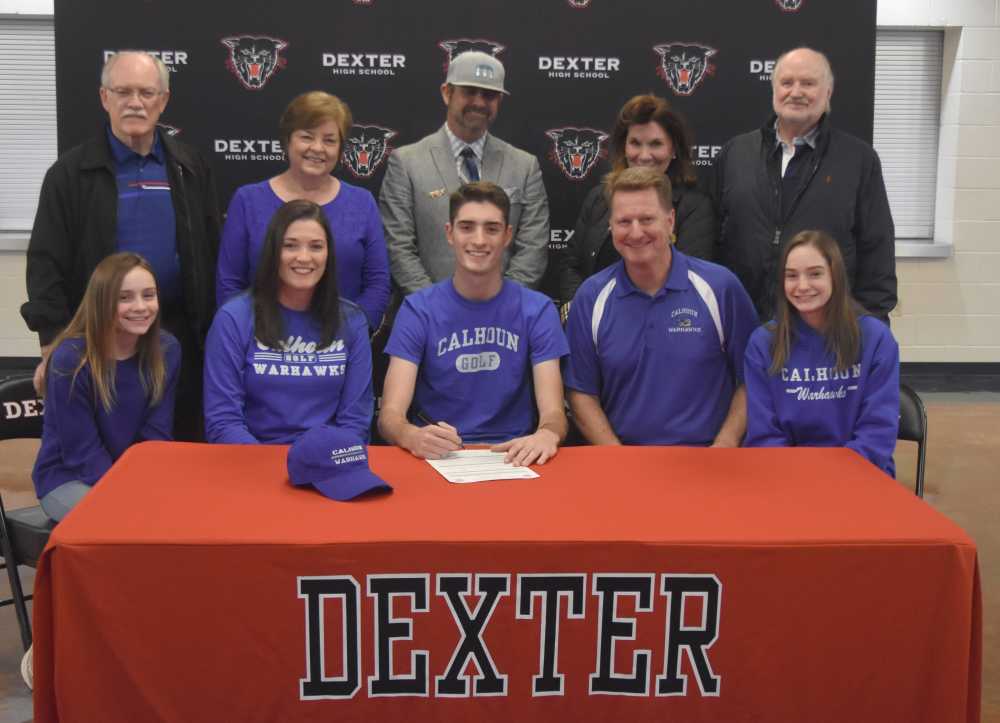 He searched the Internet until he found one he likes. He completed that process Monday, Dec. 16, at the Bearcat Event Center where he signed a letter of intent to play golf at Calhoun Community College.

“I looked at the national junior college championship from last year, and they ended up getting fifth,” Warren said. “I thought that would be a pretty good school, so I emailed them. The coach (Richard Morgan) responded. We started talking back and forth. He liked me and I liked him.”

Warren said that he talked with Mineral Area College and John A. Logan College about their programs but Calhoun was his first choice.

Dexter golf coach Eric Sitze believes Warren will do great at the next level.

“He is a hard worker and will do whatever is asked of him,” Sitze said. “He's a great teammate and has a lot of passion for the game, so I believe that will take him far at the next level. He will continue to improve as he matures the next few years.”

Calhoun is a Division I program located near Decatur, Alabama, only a few miles south of the Tennessee border.

“I really wanted to go south of Memphis and I did,” Warren said.

The Warhawks finished 36 strokes behind national champion Central Alabama and 18 strokes behind fourth-place New Mexico in the 72-hole tournament at Duran Golf Club in Melbourne, Florida.

Sitze said that Warren excels with the mental game.

“Spencer has always done a great job at controlling his emotions and making good decisions on the golf course,” Sitze said. “He's a grinder. He will work for every stroke.”

Warren knows his strengths and weaknesses.

“My wedge game from like 125 yards down to 50 yards, I’m pretty confident there,” Warren said.

The senior said that he seeks consistency in his driving game.

“It definitely needs work,” Warren said. “It’s far enough (285 yards). I’d like to narrow it down and be more accurate with it.”

Warren continually works on his game.

“I’ve practiced putting a lot over the winter,” he said. “I have a putting green in my basement. I’ve been really grinding on that.”

Warren seeks individual and team success for this upcoming season with the Bearcats. He wants to win his first all-state medal — if not winning it all — after qualifying in three straight years and coming up one stroke short of a top-15 finish in May. He would love to help his team win a state title.

Warren said that he will probably major in business but has not made a decision, and he wants to play at a four-year university after graduating from Calhoun.

“That’s the goal,” Warren said. “Get the coach to help me get to a good D-I program for golf.”

Last season, Warren helped the Bearcats win their first district championship since 2010. He won a team-high seven medals during the regular season, including winning his first varsity tournament at the Festus Invitational with a 3-over 75 April 17 at Crowne Point Golf Club in Farmington.