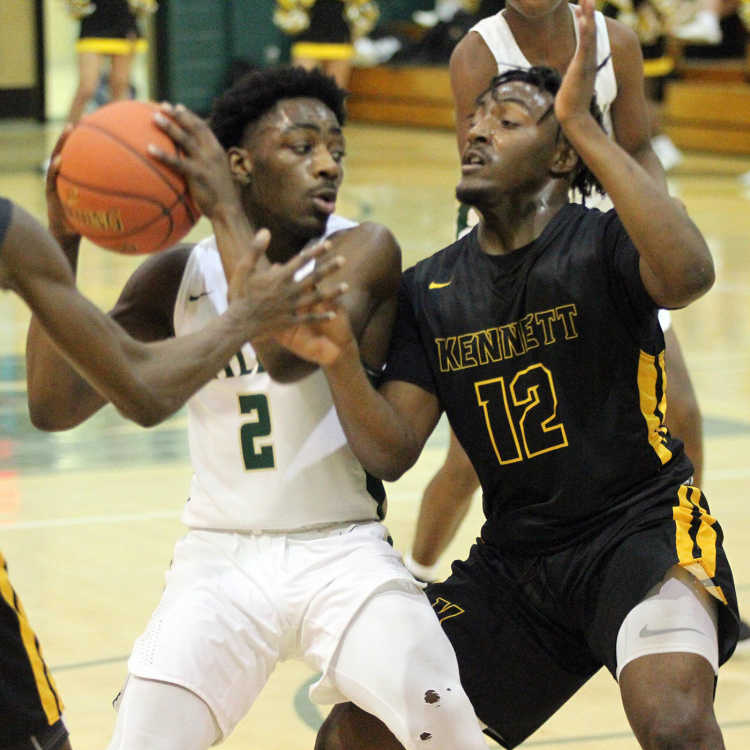 MALDEN, Mo. - After enduring a close first half against the Malden Green Wave the Kennett Indians defense stepped up in a big way early in the second half in a varsity boys basketball game at Malden High School Tuesday night.

Kennett limited the Green Wave to just four 2-point field goals in the third quarter as it outscored Malden 21-8 to build a 44-25 lead by the start of the fourth quarter. The Indians played Malden even the rest of the way on its way to a 56-37 road victory.

ôMalden played really well tonight,ö Kennett coach Andrew Halford said. ôThey played us extremely hard on both ends of the floor. Their length bothered us on offense and benefitted them on offense. They got a lot of touches around the basket against us. It was an ugly game for us but we found a way to get another district win before Christmas.ö

A big part of the Green Waveĺs offense throughout the game was the post play of sophomore center Marques Jones. The six-foot-four underclassman recorded 10 points in each half to finish with 20 points. Jones tallied a team-high nine 2-point baskets.

Junior forward Kobe Gates enjoyed his own success down low for Kennett. Gates recorded six 2-point baskets near the paint and also knocked down a 3-pointer on his way to a team-high 15 points.

ôHe was active and got some layup opportunities down low,ö Halford said. ôHe also had six or seven blocks on defense.ö

Marsayvĺaun Harrell also enjoyed a solid offensive night for the Indians. Harrell recorded eight of his 10 points after halftime. He made three 2-point baskets and knocked down four of five free throw attempts.

ôHe capitalized on the opportunities he got,ö Halford said. ôThose were a big eight points after halftime because we struggled scoring the ball tonight."

Both teams struggled to knock down perimeter shots.

ôI thought we were finally going to have a break through from the perimeter,ö McBroom said. ôWe got one to fall and usually if you can get one to fall you can get a couple to fall. But they just werenĺt falling for us tonight.ö

ôTheir record is not who they are,ö McBroom said. ôThey are huge and will be able to match our length. We are going to have to get down and play good, solid defense. Theyĺve got some guys that can really shoot it so we are going to have to really work hard and make sure we are guarding on the defensive end."

ôFinally a home game,ö Halford said. ôTonight was our seventh straight game on the road. It happens but it will be nice to play at home. I thought we had large student sections at home games last year which created a lot of excitement. We are looking forward in playing in front of our home crowd. We know Doniphan will be a tough opponent to play for a second time this month. This will be our fifth game against a district opponent already and there are a lot of implications any time you step on the court against a district opponent.ö