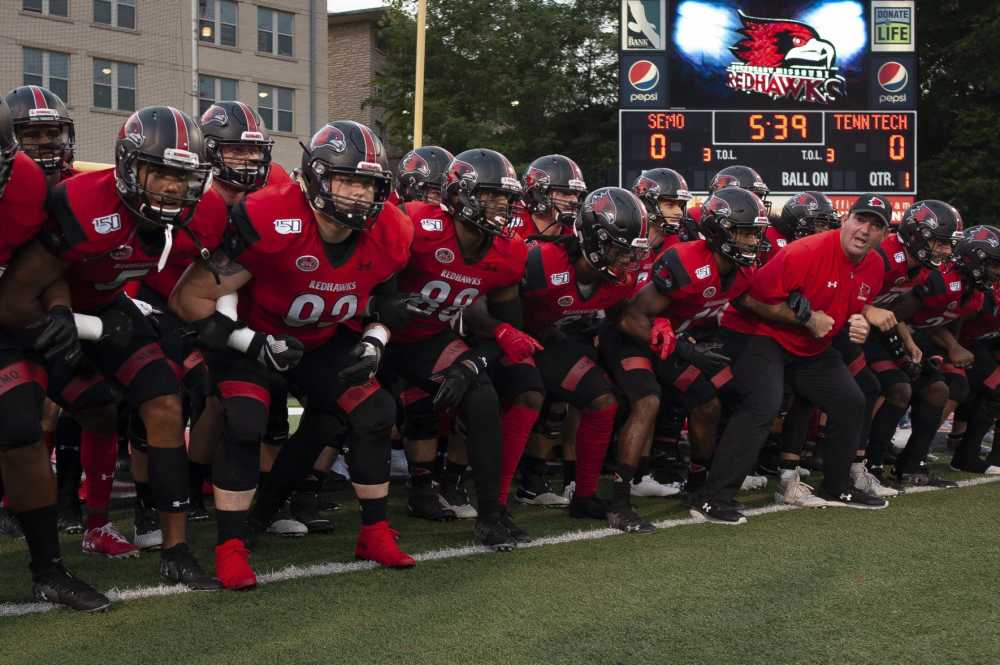 Southeast Missouri State football coach Tom Matukewicz is joined by his Redhawk seniors as they prepare to run across the field in a pregame ritual prior to playing Tennessee Tech at Houck Stadium this past season.
Jacob Wiegand
Order this photo

The recruiting class of 2020 for Southeast Missouri State football has a lot to live up to in comparison to the group that just departed from the program.

The 2019 senior class of Redhawks was the most successful class in the history of the program.

"I have this gratitude to them," Southeast coach Tom Matukewicz said of the seniors following this past season, "because they came when we didn't have any of this stuff. We didn't have the kind of excitement that we have now."

The class of 2020 prospects, 16 of which are expected to sign National Letters of Intent beginning today, are going to reap the benefits from the work done by 17 seniors that just graduated.

Those guys had to buy in on a vision of success. These new Redhawks have been able to witness it.

Southeast has won nine games in each of the past two seasons, qualified for the FCS Playoffs in each, and won a share of the Ohio Valley Conference this past season.

"The goal was to be more than one winning season," Matukewicz said. "What we talked about was being able to do it back to back. That is what a legitimate program does.

"We'll finish in the top 25 (Southeast was ranked 12th at the end of the regular season) and people take a lot of pride in that. We can go into homes and recruit on that."

The signing period for football programs across the country begins today and runs through Friday.

A second period begins February 5, 2020, and culminates on April 1.

Through both periods, Matukewicz has found his task of selling Southeast football to not necessarily be easy, but it is markedly easier than when he first came to Cape Girardeau because of the success the program has achieved.

"It's not even the same," Matukewicz said of recruiting now. "We are talking to people who you wouldn't even have tried to talk to (before).

"There is real validity in our program. We've had back-to-back (NFL) draft picks. We've been successful in academics and then with the on-field success, it resonates in homes."

The last few weeks have been chaotic, as the Southeast coaches have hosted a number of recruits from all over the country.

Matukewicz said the process of evaluating an athlete is intriguing to him, but he finds real joy in impacting a young person's life.

"It's fun to be a part of a really fun time in their life," Matukewicz said. "Sometimes you really can change their family tree when you walk in with a $24,000 scholarship.

"That is a lot of fun to help a kid who has earned it."

Matukewicz said he expects to add seven or eight more athletes in February.

"I love evaluating talent," Matukewicz said of the recruiting process. "Seeing an upside. Seeing a kid and what they can be."

Here are the expected signees today: