Jackson edges Dexter in a thriller in boys basketball 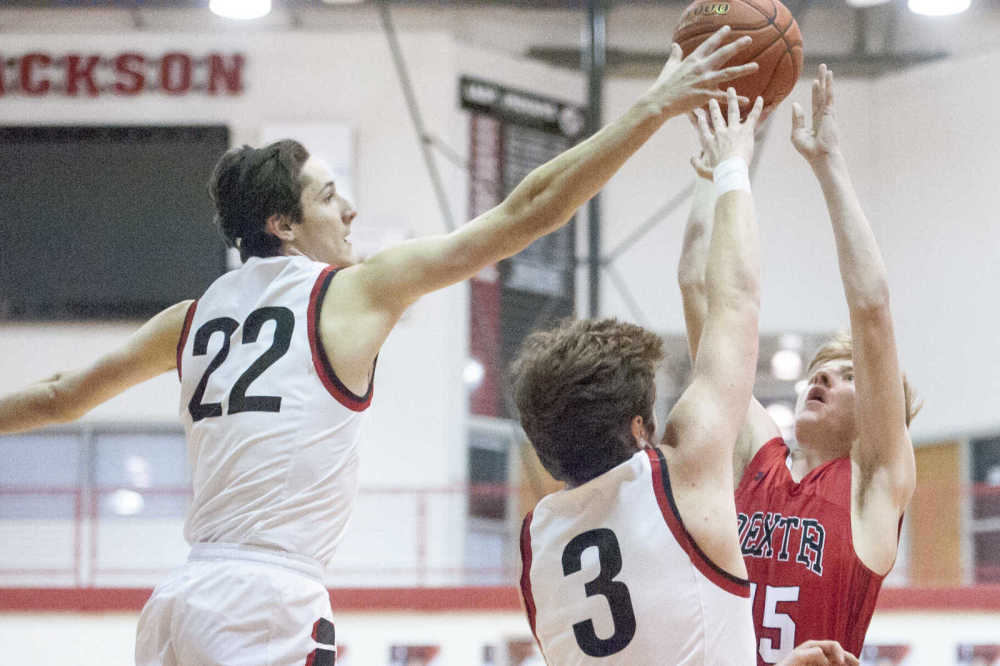 Nick Wasilewski (22) and Michael Schneider (3) contend for the ball in Tuesday's Jackson victory at home over Dexter.
Tyler Graef ~ tgraef@semissourian.com

Junior Luke Mirly came off the bench to pace the Indians with 18 points, including three 3s as the Indians evened their record.

“(Mirly) has shot well at home,” coach Darrin Scott said, “and that’s one of his strengths, catch it and shoot it.”

The contest pivoted on second half free throws.

Jackson was almost perfect at the foul line – going seven for 10 in the final 20 minutes of play.

Kannen Turley, the sensational sophomore wide receiver on the Class 5 Indians football squad, was 4-for-4 from the charity stripe in the third period.

“(Kannen) gave us points when we were struggling to score,” Scott said.

The Bearcats, on the other hand, had considerable trouble converting on its free throws, going 2-for-7 in the second half – including missing all three FTs in the crucial final period.

“We missed way too many (FTs),” said Dexter coach Chad Allen, “and combined with Jackson scoring in transition and their shot blocking, cost us the game.”

“We knew we’d have to play really well to beat Jackson here,” said Allen, “and we had our chances.”

Dexter has not beaten Jackson for more than a decade.

“I don’t know the last time we beat Jackson,” Allen said, “but we definitely had a shot tonight.”

Allen knows what Dexter must work on as the Bloomfield Christmas Tournament approaches the day after Christmas.

“We need to get to the rim more,” Allen said. “We’ve got to be more aggressive and establish (our) inside game better.”

He was the only Bearcat in double figures.

Dexter (1-4), had beaten Richland in Essex, Mo., the night before by 50 points. The Bearcats play Thursday at Malden.

The Indians also go on the road, traveling to Columbia, Mo. Saturday to face Hickman.

The Indians managed to eliminate the sour taste of being winless at the recent SEMO Conference Tournament.

“We did a much better job being patient (tonight) and looking to get to the post.”

In the junior varsity game, Jackson erased a 32-6 deficit and came back to beat the Bearcats, 56-53.