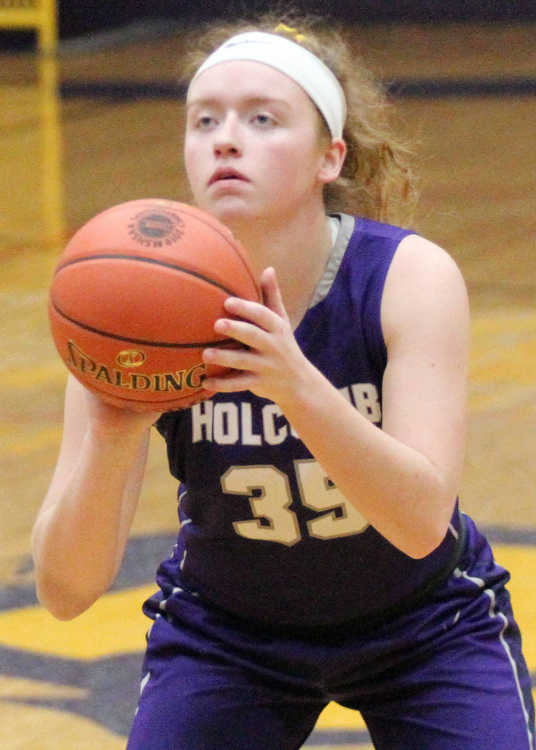 No. 4 seeded Holcomb rallied from a 30-25 third-quarter deficit to beat the No. 3 seeded Campbell Camels 68-47 in the first quarterfinal of the six-team tournament Monday night.

“We ended the game better than we started it,” Holcomb coach Alexa Stockton said. “We started attacking the basket better and getting more points in transition. At the beginning of the game we were complacent and played too soft. Once we were able to speed things up we got them in foul trouble and that really helped us down the stretch.”

Both squads enjoyed streaks of the success in the see-saw affair.

Holcomb jumped out to an 11-7 lead after one quarter of play.

Campbell followed with the first nine points of the second quarter to move ahead 16-11 and continued to lead 23-21 at halftime.

“The biggest struggle we’ve had this year is coming out super slow,” Campbell coach Laura Foster said. “We’ve been getting down by 15 and having to play catchup the entire game. Tonight we got in that routine again but were able to turn a switch on and find a way to finish the first half stronger than we had in the past. With that being said, we got in some foul trouble and didn’t really adapt to playing with fouls.”

Campbell, which had two starters finish with four fouls and three more finish with three fouls, increased its lead as large as 30-25 with 3:01 left in the third quarter. Holcomb followed with a 15-2 run to move ahead 40-32 by the start of the fourth quarter and led by at least eight points the rest of the way.

Macy Houart tallied 13 of her team-high 19 points for the Hornets after halftime. She hit a pair of 3-pointers in the first half and made five 2-point buckets in the second half.

Bailey Cupples added 18 points on seven 2-pointers and four made free throws. Cupples recorded half of her points in the third quarter for the Hornets.

Selena Burress, who knocked down a 3-pointer in every quarter, recorded a dozen points for Holcomb.

“Whoever got up the floor the quickest for us was able to put it in the basket,” Stockton said of her squad’s offense.

Three players combined to score 45 of the Camels’ 47 points.

Macy Hendrix put up 10 points in each half to pace Campbell with 20 points.

Madisyn Townsend knocked down three of the Camels’ five treys. She scored 13 points.

Adrionna Pearson tallied six points in each half to finish with a dozen points for Campbell.

“Our offense is finally coming together,” Foster said. “This is a new team. We do have multiple players who can score and they are starting to figure things out. Our shot selection was lacking a little bit in the second half but was solid in the first half. I think over time our offense will come together.”

Due to the unique six-team tournament format Campbell and Holcomb both advance to the semifinals despite Monday’s quarterfinal result.

Defending champion Holcomb will take on No. 2 seeded Advance in the first semifinal Wednesday at 5 p.m.

“Heck we could see Campbell again in a couple days,” Stockton said. “We’ve got to get back to practice Tuesday and prepare for our next opponent Wednesday. We are not taking anyone lightly in this tournament moving forward.”

The second semifinal between No. 1 seeded Senath-Hornersville and No. 3 seeded Campbell follows Wednesday at about 8 p.m.

“I would have loved for things to go the other way tonight,” Foster said. “But it is exciting that we get to come back and play Wednesday and still have a chance to get to the championship if we win. I do think this team deserves to be in the championship but we are going to have to work to get there.”

The No. 2 seeded Advance Hornets outscored the No. 5 seeded East Carter County JV Redbirds by single digits in every quarter on its way to a 57-32 victory in the second quarterfinal at the Bloomfield Invitational Monday.

Alandry Below scored 20 points in the first half and 12 more in the second half to pace Advance with 32 points.

Advance (5-2) will take on No. 4 seeded Holcomb (3-2) in a championship semifinal of the six-team tournament Wednesday at 5 p.m. Holcomb upset No. 3 seeded Campbell 68-47 in its quarterfinal Monday at Bloomfield.

“Holcomb’s got some girls that can play,” Asmus said. “It’s going to be tough moving forward.”

No. 1 seeded Senath-Hornersville beat No. 6 seeded Bloomfield 49-17 in the nightcap quarterfinal Monday night at the Bloomfield Tournament.

Senath-Hornersville led 10-2 after one quarter, increased its lead to 22-10 by halftime, and led 33-15 by the end of the third quarter.

“We’ve been working really hard on our defense,” Senath-Hornersville coach Nicki Pierce said. “Our goal was to eventually wear them down. We are small in numbers as well but we tried to push on and get them tired tonight.”

“We want teams to have to guard all five of our girls,” Pierce said. “All of our girls are in the gym every day working to become shooters. We don’t have one shooter. We are all shooters.”

The Lions will meet Campbell for a second time this season Wednesday. Senath-Hornersville beat Campbell 49-38 on Dec. 3.

“We are excited to play them again,” Pierce said. “They are a tough group. We are not going in there assuming it’s going to be easy just because we beat them last time. We are expecting a battle and looking forward to it.” 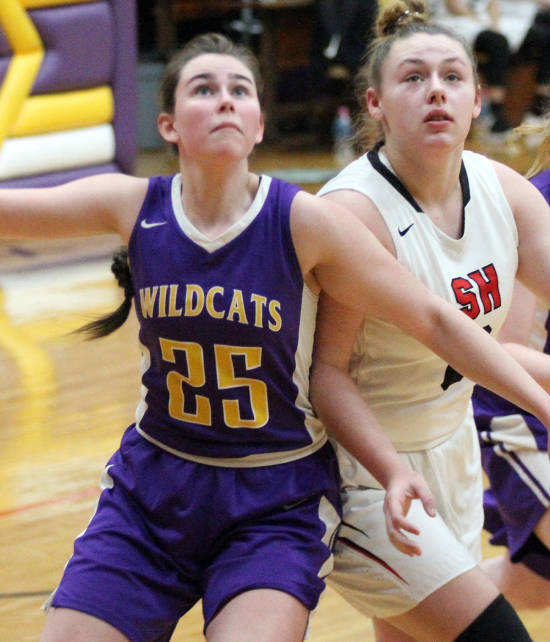 Photo by Dustin Ward, staff
Bloomfield's Cox and Senath-Hornersville's Accountess Lewis battle for a rebound Monday at the Bloomfield Invitational.
Order this photo
Respond to this story