Charleston rebounds to take third-place with win over Kennett 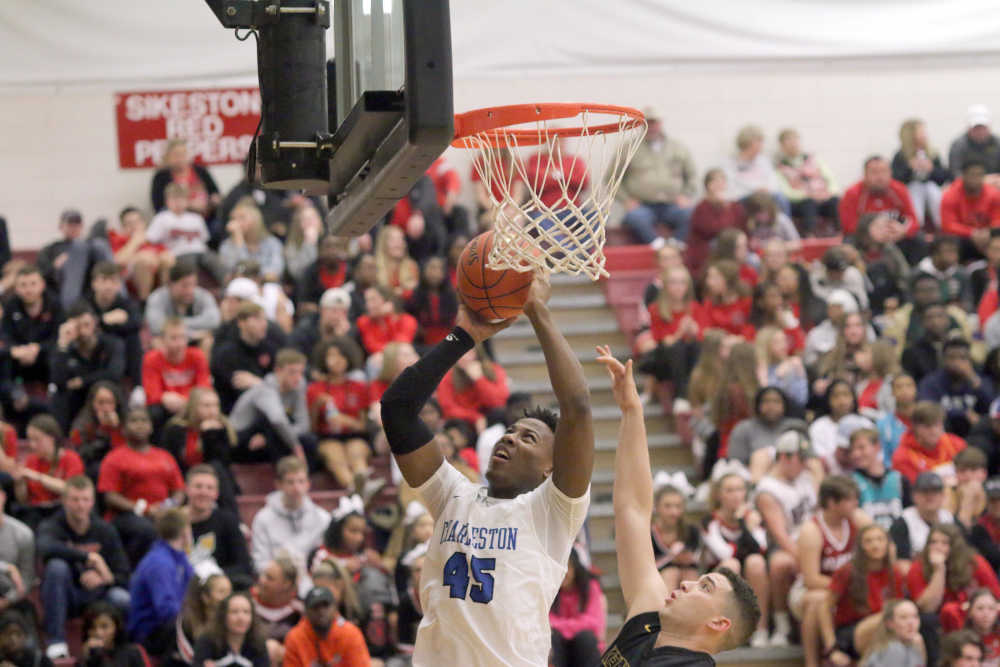 Charleston’s Blessin Kimble (45) finishes at the rim against Kennett, in the third-place game of the Boys SEMO Conference Tournament, on Friday, Dec. 13, 2019, at the Sikeston Field House.
Alex Wallner/Standard Democrat

SIKESTON, Mo – They may not be hoisting the SEMO Conference trophy like many expected, but the Charleston Bluejays found a way to end their week on a high note.

After getting upset by fourth-seeded Sikeston in the semifinals, the top-seeded Bluejays rebounded Friday night with an 81-63 over seventh-seeded Kennett to take third place in the tournament.

“That’s what we were trying to do tonight, just end the tournament on a high note,” Charleston head coach Danny Farmer said. “We didn’t want to lose two in a row, especially to one of our district foes. We wanted to beat a district opponent to keep that number one standing in our district.”

In the same game last year, Charleston fell 79-58 to Poplar Bluff to leave the week with fourth-place in the conference.

Charleston (5-1) never trailed by more than a possession and built double-digit leads in both the second and third quarters only to see Kennett (5-1) work their way back into a two-score game.

Six-straight points by Charleston early in the second half built their lead to a then-high 16-points, 49-33, but and Indian timeout helped Kennett regroup.

By the final minute of the quarter, the Indians closed the gap to 59-55 and remained within five points of Charleston early in the fourth.

An effective Bluejay press started to take its toll, however, and the turnovers started to mount for Kennett.

A free throw and back-to-back Charleston baskets pushed the Bluejays lead in double-digit territory once again.

A 14-2 Charleston run started midway through the quarter, fueled by three Kennett turnovers, and effectively iced the game.

The Bluejays outscored the Indians 19-8 in the fourth quarter.

“We had some good life in the third quarter cutting it down to five,” Kennett head coach Andrew Halford said. “We had some fight, but they went full-court pressure on us, and we let them make us turn the ball over.”

“We pressed,” Farmer said. “We wanted to practice on our press tonight, and I think we got them a little tired at the end. Then we started getting it into our big guy (Kimble).”

“Sam shot it well, and Blessin played well inside. He took care of the easy buckets.”

Quav’aun Harrell did the bulk of the scoring for the Indians with 31 points, hitting five 3-pointers and going a perfect 4 of 4 at the free-throw line. Ben McMullan added 20 points to the cause.

“We gave up 41 to Cape (in the same span) last night. A lot of it is on us not performing on the defensive end.”