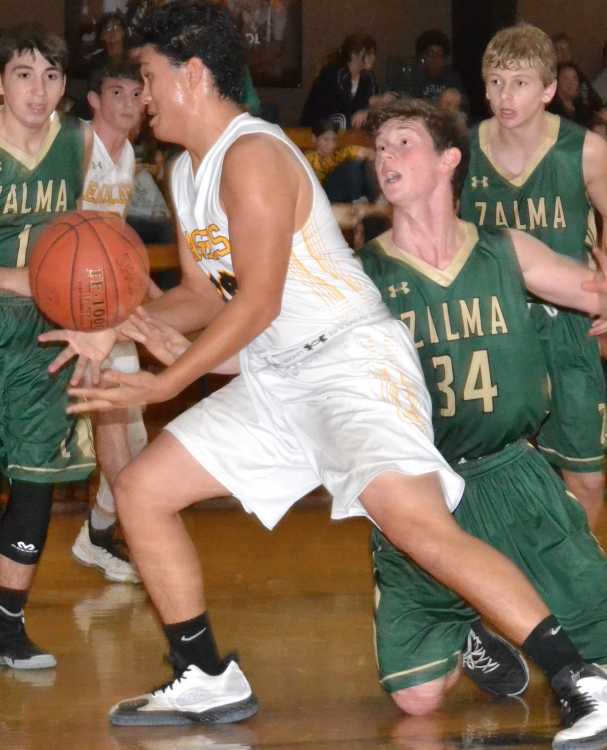 Zalma's Nate Ware (34) tips the ball away from Naylor's Chase Sarabia during Friday's homecoming game at Naylor. Naylor improved to 3-1 on the early season with a 58-56 win.
DAR/Ron Smith
Order this photo

NAYLOR — The Naylor Eagles and Zalma Bulldogs won’t have long to wait for the rematch.

Naylor ran its early-season win streak to three games on homecoming night with a 58-56 win as Nick Garrett broke up a pass on a hard-nosed play and Zalma failed to get away a potential game-tying shot with three seconds to play.

The rematch will come Monday night at the Campbell Christmas Tournament when the fifth-seeded Eagles and fourth-seeded Bulldogs clash again at 7 p.m.

Garrett was lying out-of-bounds near the Zalma basket as the buzzer sounded after a hard collision on the game-deciding play.

“We just try to do one thing — we try to play defense because we aren’t a good offensive team,” said Naylor coach Chris Moody, who lost Zeke Ward and his 25-point-per-game scoring average to graduation from last season.

Zalma, winless in five games this season, connected three times from 3-point range in the final period to overcome an eight-point deficit and tie the game at 56-56 with 22 seconds to play.

With the Bulldogs attempting to apply backcourt pressure following a timeout, Naylor’s Mason Schrimsher fired a long pass to Wyatt Yarbrough, who connected on what proved to be the game-winning basket with nine seconds on the clock.

The Eagles’ biggest offensive run of the night came after senior Chase Sarabia, one of the team’s top scorers and rebounders, went to the bench with his fourth foul just two minutes into the third quarter.

Zalma, which outscored the Eagles 21-3 from three-point range, quickly went on an 8-0 run capped by Nate Ware’s 3-pointer and Jake Wade’s layup to take a 35-34 lead. But the Eagles followed with a 12-0 run on their own with Schrimsher scoring six points to take their biggest lead of the night at 46-35.

“We’re paper thin when it comes to depth but we had a lot of kids really step up,” said Moody. “We’re 3-1 and that loss was by one point in our first game to Summersville.”

One of those stepping up was Yarbrough, pressed into the starting lineup in place of injured senior Seth Jones, who isn’t expected back until after Christmas.

Yarbrough finished with eight points. Schrimsher led the Eagles with 17 points while Cody Jones added 12 and Sarabia finished with 12.