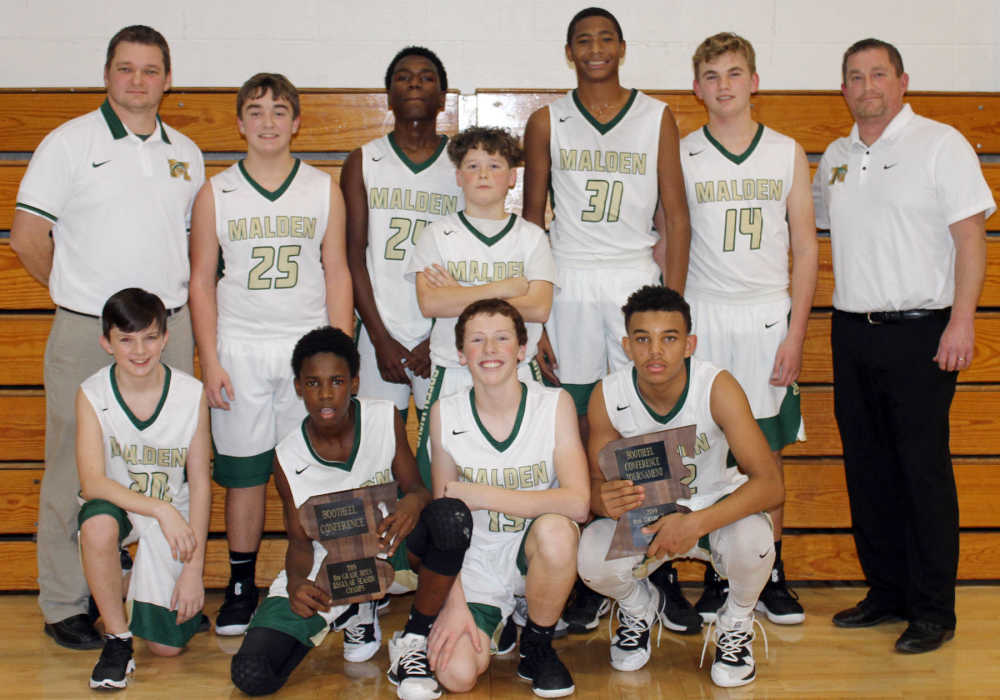 Photo by Dustin Ward, staff
Pictured is the Malden eighth grade boys basketball team with its first-place plaque after beating Portageville in the championship of the Bootheel Conference Tournament Thursday night at Malden.
Order this photo

MALDEN, Mo. - The No. 2 seeded Malden Green Wave jumped out to a 21-7 lead by end of the first quarter and led by double digits the rest of the way as it beat No. 4 seeded Portageville 52-39 in the eighth grade title game of the Bootheel Conference Tournament Thursday at Malden.

“We run a little jump play on defense that gets us a layup if it works well,” Malden coach Jon Smith said. “We hit that right off the bat. A lot of what we do with our offense has to do with our pressure defense.”

Marcus Burton tallied a team-high seven 2-pointers for Malden. He finished with 14 points.

Quamareous Farmer also finished in double digits for Malden. He tallied 10 of his 13 points in the first quarter.

Malden finishes its season with a record of 11-3.

“It’s been a great season,” Smith said. “Coach Carroll and I have had these kids since they were fifth graders. We’ve had the opportunity to work with them for four years and every year they’ve gotten better. They’ve listened and worked hard for us and it has shown in our overall record. This is a really special group of kids and we are a little reluctant to let them go on but that’s the nature of things I guess.”