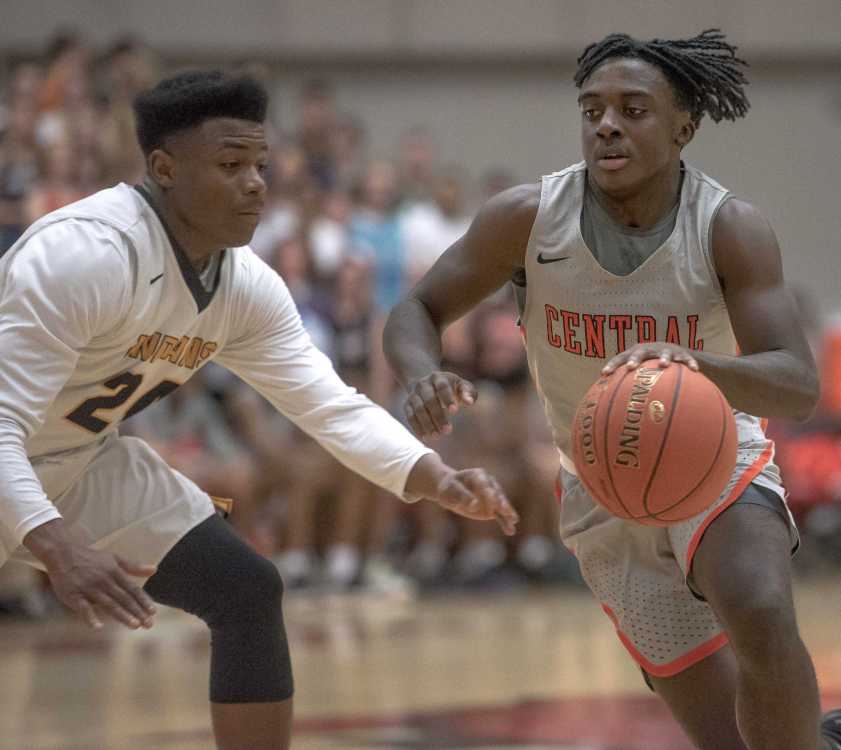 Cape Central's Tyrus Reddin (5) drives during a semifinal matchup between the Tigers and Kennett Thursday at the Sikeston Fieldhouse in Sikeston.
Tyler Graef ~ Southeast Missourian
Order this photo

Cape Girardeau Central improved to 5-0 and will meet Sikeston on its home court Friday after the Tigers beat Kennett 72-40 in a SEMO Conference Tournament semifinal.

Sikeston had a much more difficult time reaching the championship game in the other semi as the host Bulldogs nipped top-seed Charleston, 52-51.

There was one lead change in the Central-Kennett contest as the Indians led for just 40 seconds midway through the first quarter, 9-8. The Tigers led wire-to-wire otherwise, going up by 13 at half, and winning going away by 32 at the final buzzer.

ōGiving up 41 points (to Central) in the first half was a bad starting note for us.ö

Tigers coach Drew Church said the unsung hero for his unbeaten squad is junior Darion Triplett, who came off the bench to notch 11 points, including a three-pointer.

CentralÆs reliance on the jumpshot was noticeable in the first half.

ōWe got called on some charges early,ö said Church. ōand this may have made our guys a little hesitant going to the rim.ö

Central was effective at the 3-point line, converting 70% of attempts from the charity stripe.

ōNot taking anything away from (Central),ö said Halford, ō(but) a lot of things we did helped them out.

Halford noted the superior rebounding of the Tigers and had particular dismay for his squadÆs sloppy play.

ōWe were content to just watch loose balls,ö Halford said. ō(Central) was quicker and more aggressive, plus we had some bad turnovers that led to quick baskets for them.ö

Charleston plays Kennett in the third-place game at 7 p.m. at Sikeston Field House.

The Tigers face the fourth-seeded Bulldogs in the tournament championship game at 8:30.

Sikeston has won four-straight SEMO Conference tournaments, and eight since the tourney was revived in 2006.

Church says the two teams are quite familiar with one another.