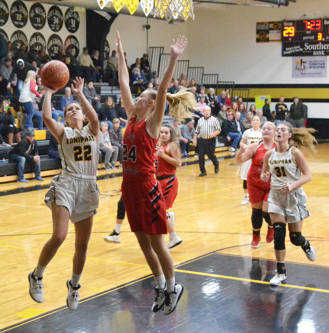 Senior post Emily Ederer scored 26 points and the defense averaged creating one turnover per minute for four quarters as the Doniphan Donettes opened Ozark Foothills Conference play with a 62-29 win over the East Carter Lady Redbirds.

Ederer scored 15 points in the first half as Doniphan controlled a 29-15 halftime lead before outscoring the Lady Redbirds 22-6 in the third quarter to set up a running clock entering the fourth.

“Emily is hard to guard anyway but the pick-and-roll worked out good for us,” said Doniphan coach Adam Epps. “(Guards) Olivia (Creutz) and Jaylin (Dutton) made some really nice passes and made Emily’s job easier to finish. She had a nice game.”

Epps turned things over to his bench with 3:46 on the third-quarter clock. Allison Skaggs, Sydni Speck, Bailey Carson, Madison Eddington and Timber Turner responded with a 13-4 run of their own. Doniphan’s non-starters accounted for 21 points led by Carson, a sophomore, with eight and Skaggs, a freshman, with seven.

East Carter (2-2) was coming off back-to-back wins over Malden and Alton. Hailey Brown led the Lady Redbirds with eight points and Makenna Moore finished with seven. The Lady Redbirds made 13 of 40 attempts from the field

Through five games, the Donettes are giving up 41 points per game and have yet to allow 50 points in single contest.

“Three-fourths of our practices are defensive stuff,” Epps said. “That may be the reason we miss some easy shots sometimes. We preach defense.”

Abbey Hester had 22 points for Twin Rivers (3-3), 17 of which was in the second half. She had 13 of Twin Rivers’ 19 points in the fourth quarter and grabbed 14 rebounds to finish with a double-double. Jaylynn Williams led Twin Rivers with five assists.