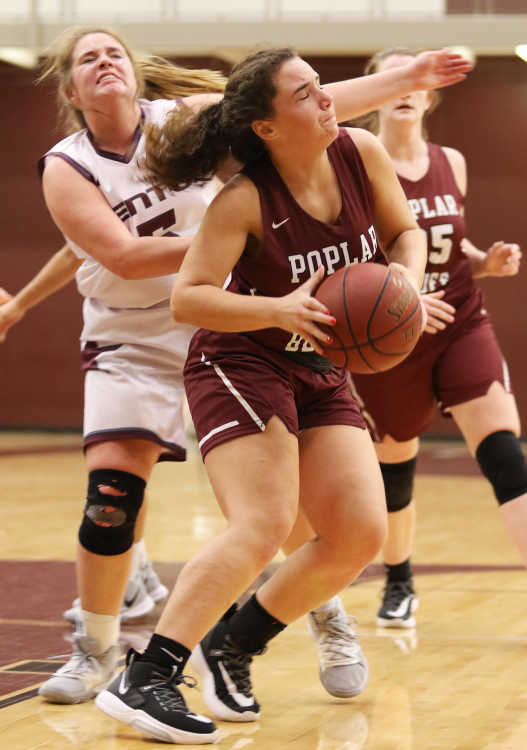 POPLAR BLUFF — Hannah Bass knocked down a 3-pointer to give the Poplar Bluff Mules a 12-point lead late in the third quarter but it nearly disappeared in two minutes.

Despite not hitting a shot from the field over the final 10 minutes and 40 seconds, the Mules were able to hold off Benton (Ill.) 40-35 in the opening night of the SEMO Border Showdown on Thursday.

"We never would put it away," Mules coach John David Pattillo said. "We missed a lot of buckets, close."

Kiley Bess finished with 15 points and did not score in the fourth quarter as Emma Johnson sank 5 of 6 foul shots for all of Poplar Bluff's late offense. Johnson had 12 points and seven rebounds while Bass had two 3-pointers for six points and Katie Pattillo added another 3 among her five points.

The Mules (4-1) were the only SEMO team to win on the opening night and will face Ozark at 8 p.m. Friday in the second round of the Showdown with a 4 p.m. Saturday start against Earle (Ark.).

Poplar Bluff led 35-32 at the start of the fourth quarter. Johnson poked the ball away for a steal leading to a pair of foul shots. Benton's Ensley Tedeschi, who scored 10 points, split two foul shots with 6:49 left and neither team scored over the next three minutes.

Mady Wallace, who led Benton with 12 points, scored on a pass from the high post by Sesley Tedeschi to cut Poplar Bluff's lead to 37-35. But the Rangerettes missed a one-and-one chance at the line to get closer with 3:03 to go then missed three shots before Bess came away with the rebound.

Johnson was fouled with 22 seconds left and sank the second of two foul shots and pulled down a rebound before being sent back to the line with 11 seconds left. The junior sank both free throws to set the final score.

"Emma has been playing really well," Coach Pattillo said. "She did a nice job, hit her free throws at the end."

After trailing in the opening minute, the Mules put together a 9-0 run to end the first quarter up 17-7.

Coach Pattillo said Bess "tweaked her ankle" in practice earlier in the week. She had eight of Poplar Bluff's first 17 points while Johnson chipped in seven, knocking down a 3-pointer from the corner to end the scoring.

Alexis Richardson sank her only basket in the first quarter on a fastbreak that started with a defensive rebound by Abby Turner, who finished with seven rebounds.

Bass knocked down a 3 to open the second quarter and Bess followed with one of her own to maintain a 13-point cushion. Katie Pattillo's 3 later put the Mules up 14 and Poplar Bluff led 28-16 at halftime.

Benton got within six before a steal by Bess led to a three-point play and Bass later sank her 3 for a 34-22 lead at the 2:40 mark.

Benton scored the next 10 points before a Bess free throw just before the end of the third quarter.

The Mules scored 14 points off turnovers, forcing 17. Benton sank 3 of 7 foul shots while the Mules were 11 of 15 with six coming in the fourth quarter.

"It's been nice this year that our defense has been carrying us a little bit and we've gotten a lot better," Coach Pattillo said. "What I was really pleased with was that we weren't fouling like we did the last game."

The Tigers scored 15 straight points to take a 19-2 lead and cruised past the Bearcats.

Alexa Werneck scored all five of her points in the first quarter for Dexter while Sydney Asberry and Avery Neely also scored five points for the Bearcats, who trailed 23-7 after one quarter and 53-13 at the half.