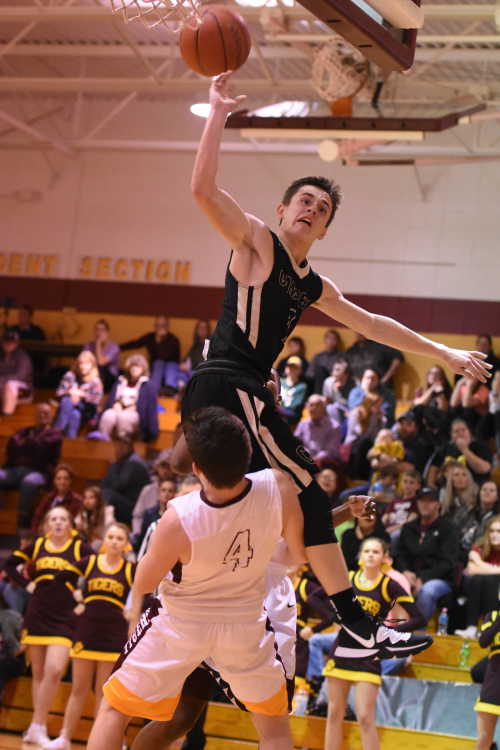 NEELYVILLE — Neelyville got a run early and a run late and it was just enough to win its home opener in a district showdown.

The Tigers trailed for most of the second half until a nine-point run put them ahead by six with 90 seconds to go. It was enough to hold off Campbell for a 64-60 win Tuesday.

“I feel like Campbell is at the top of our district,” Neelyville coach Patrick Morton said. “I think it’s one of the toughest districts in the state. We were happy to compete with them and to come out with a win was kind of the cherry on top. For us to be able to play with and compete with Campbell should definitely boost our confidence.”

It was a back-and-forth game throughout the third and fourth quarters. The Camels held onto a 3-point lead going into the fourth and Neelyville (3-2) eventually tied the game with a little more than 4 minutes remaining.

Campbell (3-2) made a 3, and Jemaane Williams answered with a steal and a three-point play to tie the game again with 3 minutes left.

The Camels turned it over, and Williams scored on another fastbreak to give the Tigers the lead.

Then a third consecutive turnover by the Camels led to Noah Burton passing underneath to Curtis Fowler for two. Neelyville scored again and was suddenly ahead by six points with 90 seconds to go after a 9-0 run.

Campbell got a quick basket, called a timeout, and went to fouling down by four in the final minute.

Neelyville got the ball to Williams, who made a trio of free throws to put the Tigers ahead by seven before Campbell made a 3 with 25 seconds left.

Williams went back to the foul line and made one, and Campbell’s Blake Fowler, who finished with 30 points including 10 in the fourth quarter, buried a 3 from 25 feet to cut the lead to two with 17 seconds to go.

“Blake Fowler is without a doubt one of the best players in our area if not the state. He is as legit as they come. We were just trying to keep the ball out of his hands as much as possible,” Morton said.

Williams made one free throw again, and Curtis Fowler picked up his fifth foul trying for the offensive rebound.

With 14 seconds left and down by three, Blake Fowler raced up the floor and took a stepback 3 from the wing with Williams guarding him that hit the back iron, and Williams grabbed the rebound.

Williams then made the front end of his free throws and the clock expired as Blake Fowler shot one last 3.

“Neelyville is a really good team. Neelyville wasn’t preseason ranked in the top-10 in the state for no reason,” Campbell coach Steve Fowler said. “They’ve got a lot of kids back, a lot of size in there. That’s a good game for both of us to play each other.

Neelyville had a 14-7 lead in the first quarter with both Curtis Fowler and Williams on the floor, but then Curtis Fowler picked up two fouls and the pair weren’t on the floor at the same time again until the second half. In that stretch, Campbell not only rallied but took a two-point lead into the locker room after a late bucket in the paint.

“Anytime you get somebody in foul trouble that’s really not what you want. That’s really what hurts us is when one of those guys goes out,” Morton said. “I’m really proud of our guys, they stepped up. Curtis was out most of that first half with foul trouble and our other guys stepped up and made plays and kept us going, kept us in the ballgame. Jemaane and Curtis played well, but it was a team effort.”

Blake Fowler got a three-point play and then Curtis Fowler went to the bench with two fouls and 3:31 left in the first quarter.

Barely 90 seconds later, Blake Fowler made a 3 to give Campbell a one-point lead.

It was the first time Campbell had the lead since they scored to start the game, but there were another six lead changes and three ties the rest of the first half.

Curtis Fowler returned to action with 3:40 left in the second quarter, replacing Williams, and immediately made an impact.

He tipped in a rebound on the Tigers’ next possession, got a block at the other end, grabbed two more offensive rebounds and kicked out the second to Austin Ennis, who made a 3 that put Neelyville ahead by five.

“We were trying to do our best to try to keep two guys on Curtis when he was in the game, just trying to find him early and get bodies on him, get hands on him so he wouldn’t just pound us,” coach Fowler said. “He goes to the rim strong, we just didn’t do a good job of sliding over, stepping in and taking that charge. That is we’re going to have to get better at.”

Williams returned with 2 minutes left and Curtis Fowler went to the bench.

With Neelyville still ahead by four, Skylar Morrison and Charles Parker, who finished with 12 points, scored to tie the game with 49 seconds left. Campbell then found scored for one more first-half lead change.

Comments
View 6 comments
Note: The nature of the Internet makes it impractical for our staff to review every comment. Please note that those who post comments on this website may do so using a screen name, which may or may not reflect a website user's actual name. Readers should be careful not to assign comments to real people who may have names similar to screen names. Refrain from obscenity in your comments, and to keep discussions civil, don't say anything in a way your grandmother would be ashamed to read.
Respond to this story