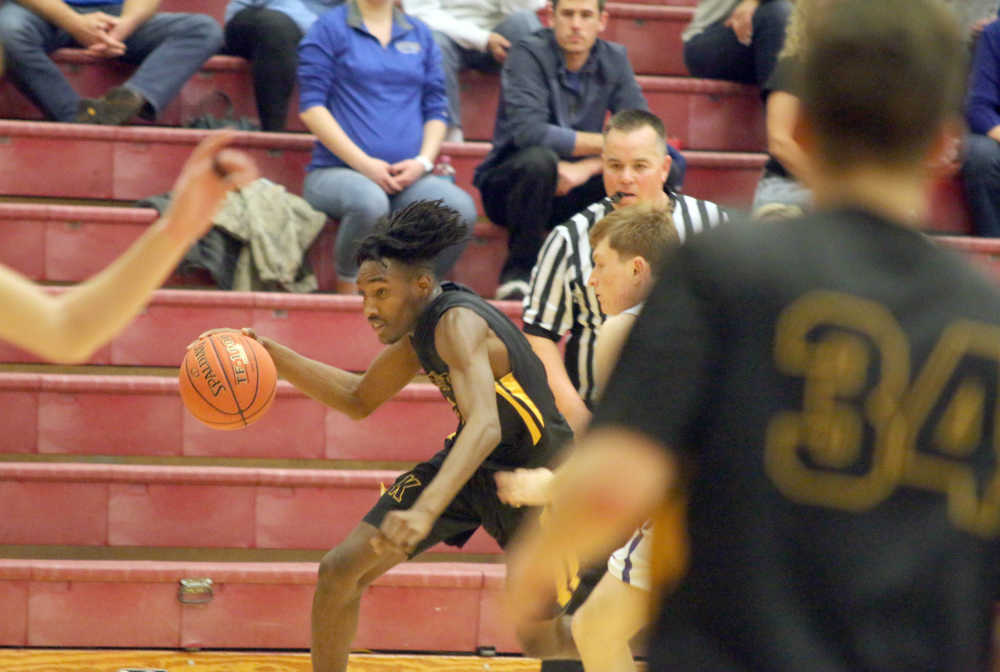 Kennett's Quav'aun Harrell dribbles around a Notre Dame defender, on Monday, Dec. 9, 2019, in the first round of the Boys SEMO Conference Tournament, at the Sikeston Field House.
Alex Wallner/Standard Democrat

SIKESTON — Having long limbs, along with being able to score anywhere on-the-floor is a quality that select basketball players have.

For Kennett senior Qauv’aun Harrell, he is one of them and showed off his repertoire on Monday night against No. 2-seeded Notre Dame.

Harrell scored 26 points, on 9 of 21 shooting, and six rebounds, as the Indians went on to defeat the Bulldogs 70-66, in the first round of the Boys SEMO Conference Tournament, at the Sikeston Field House.

“He’s someone we have to have put the ball in the hole for us,” said Kennett head coach Andrew Halford of Harrell. “He’s got to score, but we got to make sure that we’re limiting those questionable shots when he’s getting in the flow, the rhythm of the game. We got other guys that are fully capable; we just got to play the game together and keep that ball moving.”

With the ability to get off any shot he wanted, drive into the teeth of the Notre Dame defense, or shoot from long-range, Harrell proved to be a difficult cover for any player that stepped on the floor for the Bulldogs.

Leading 23-15 after the first quarter, the Indians’ did not look frightened in the least by what Notre Dame had to offer. 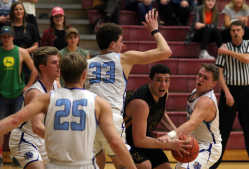 Kennett's Jackson Henfling tries to pass out of a Notre Dame double-team, on Monday, Dec. 9, 2019, in the first round of the Boys SEMO Conference Tournament, at the Sikeston Field House.
Alex Wallner/Standard Democrat

A strong first quarter, though, was quickly washed away, as the Indians scored three points in the second quarter, and headed into halftime down 31-26.

Kennett couldn’t buy a basket, as they only made one field goal in the period.

Seniors Justice Thoma and Tyler Landewee both finished off the first-half strong for Notre Dame, as both scored six points each in the second quarter. Thoma finished with 13 for the half, on 6 of 8 shooting, and did not miss an attempt from within the three-point line.

Thoma finished with a team-high 21 points for Notre Dame. He shot 9 of 15 from-the-floor and grabbed seven rebounds. 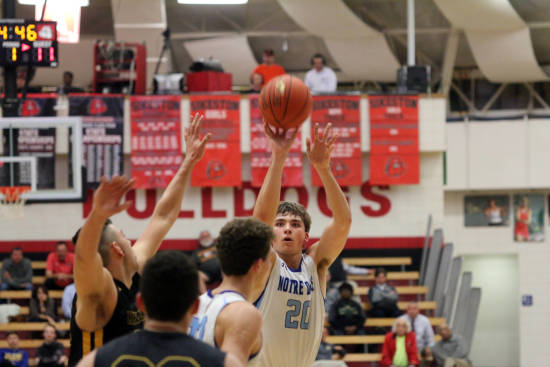 Notre Dame's Justice Thoma shoots the ball over a Kennett defender, on Monday, Dec. 9, 2019, in the first round of the Boys SEMO Conference Tournament, at the Sikeston Field House.
Alex Wallner/Standard Democrat

A team-first player, though, Unterreiner said that is one quality that he likes most about his senior.

“Ultimately, what I like about Justice is he’s not going to care how many points or rebounds he had tonight,” Unterreiner said. “All he’s going to care about is that we lost. Yes, he had a good game offensively for us. Got some big rebounds, but our effort across the board wasn’t consistent to match that, so as well as he played, he’s not going to be happy that we lost. He’s going to be ready to come back tomorrow and see what we can do to get better.” 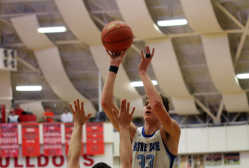 Notre Dame's Caleb LeGrand shoots the ball over a Kennett defender, on Monday, Dec. 9, 2019, in the first round of the Boys SEMO Conference Tournament, at the Sikeston Field House.
Alex Wallner/Standard Democrat

After a first-half, and mainly a second quarter, dominated by the Bulldogs, there was no quit in the Indians.

Kennett came out of the break with a different fire. They would outscore the Bulldogs 24-12 in the third, and retake the lead, at 50-43, in the process.

Harrell did most of his damage in the period, where he scored 13 points.

From one quarter to the next, Kennett looked like a different team, and for Halford, it was all about limiting the shots for a team that can get hot.

“We were just hoping to contest, keep them in front and limit their scoring opportunities,” said Halford of Notre Dame “I know in the second quarter, Landewee and Thoma got hot, it felt like they hit everything they threw up. But, us coming out in the third and knocking some down king of balanced it a little bit for us.”

Thoma was held to two points in the third, while Landewee had five, as Kennett took a seven-point lead into the final eight minutes of regulation.

Junior Kobe Gates scored eight of his 10 points in the period. He finished his night shooting 4 of 8 from-the-floor.

In the fourth, Notre Dame continued to fight back and eventually cut the Kennett lead to two points with just under 14 seconds left to play.

Leading 68-66, senior La’quez Pulliam was at the line to try and extend the lead for the Indians. Pulliam hit one of his two free-throw attempts, leaving the Bulldogs with not a whole lot of time left to work.

On their next trip down-the-court, though, Notre Dame got called for traveling to give the ball right back to the Indians, who went on to take advantage.

Harrell got fouled and hit one of his two free-throw attempts to make the score 70-66.

On the very next possession, Notre Dame head coach Paul Unterreiner put the ball in the hands of the player he trusts the most.

Senior Tyler Landewee had the ball with a chance to make a play, but as he was driving to the rim for a layup, got called for a traveling violation, the second-straight for the Bulldogs, to give the Indians the ball right back and allowing them to run out the clock for the win.

Despite a late mistake, to Unterreiner, there is no one he wants taking the ball down-the-floor more than Landewee, and a player that he still has the utmost trust in, in a late-game scenario.