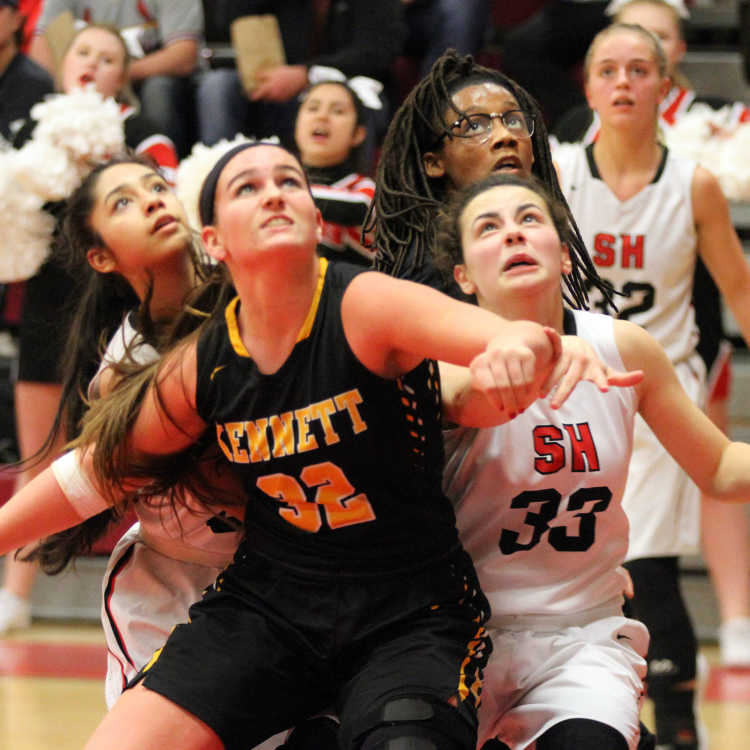 “The first half is the best we’ve played all season,” Kennett first-year coach Aaron New said. “Offensively we got out in transition and got easy buckets and defensively we were active and caused them all kinds of problems.”

"I think one of the big things in the first half was we were just a little bit nervous going up against a bigger school,” Senath-Hornersville first-year coach Nicki Pierce said. “At halftime, I told them we needed to pick up our intensity and get the ball inside more. They stepped up and played harder and moved the ball around more effectively in the second half. In the end, it helped. We just needed to start the game the way we finished it. But I was proud of the way they finished because not many teams would stick with it like that. One of our goals this season is to continue trying to get better and we definitely did that during the second half tonight.”

The Lions’ second-half offensive success was fueled by the post play of Hannah Johnson down low. Johnson tallied 11 of her team-high 14 points after halftime. She displayed the ability to score in the paint and from the perimeter as she finished with a pair of treys, three 2-point baskets, and made both free throws she attempted.

“Hannah has never been someone that has been forced to be a scorer,” Pierce said. “She’s stepped up her game this season on offense. She’s scored in double digits in most of our games.”

Freshman center Accountess Lewis also enjoyed some success on offense for the Lions. Lewis knocked down a couple of 2-point baskets and made all five free throws she attempted on her way to a nine-point performance.

“She is a freshman,” Pierce said. “It’s amazing to see her work that hard underneath at such a young age.”

Caroline Patton scored 13 of her team-high 19 points for the Indians before halftime. She knocked down five 2-pointers, a 3-pointer, and made six of the nine free throws she attempted.

Taleigh Harrell all finished in double digits for Kennett with 11 points. She made five 2-point baskets and a free throw.

“We played quite a few kids,” New said. “We’ve still got a couple out we are looking forward to getting back so we will have a little more depth. But we were still able to rotate kids tonight and get several kids some playing time.”

"We plan on being in the gym every day after school the rest of the week,” Pierce said. “We need to work on picking up our intensity and getting the ball up and down the floor so we run a little bit more in games.”

“I’m probably as pleased as I could be so far,” New said. “We are getting better each game and that’s what we are looking for. We play in a tough league but it seems like each game we continue to improve and hopefully, that will happen again on Thursday night."

Kennett is back in action Thursday when it plays at New Madrid County Central in a crucial district affair.

"We’ve got a very important game for December coming up,” New said. "We need to go up there and play well."