THRILLER: Heuring’s late free throw’s prove to be the difference in Kelly’s 87-84 overtime win over Advance 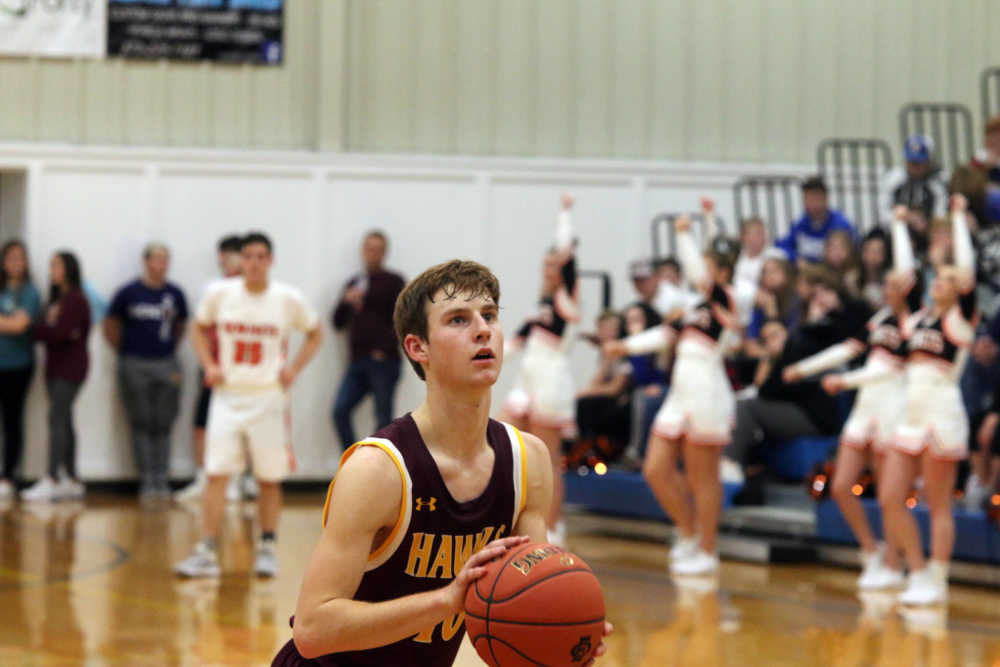 Kelly’s Devin Heuring focuses on a free-throw attempt in overtime against Advance, in the semifinals of the Oran Invitational Tournament, on Thursday, Dec. 5, 2019, at Oran High School, in Oran, Mo.
Alex Wallner/Standard Democrat

ORAN, Mo. — Free throws can make or break a team down-the-stretch of a game.

An unguarded shot can cause teams trouble, but for Kelly senior Devin Heuring, that was not the case, in the Hawks 87-84 overtime win over Advance in the semifinals of the Oran Invitational Tournament on Thursday night.

With the game tied at 81, there were no nerves in Heuring as he stepped to the free-throw line for a chance to put his team up two in the waning moments of overtime. All he was concerned about was making a shot that he has practiced countless times.

“I wasn’t nervous, I just knew I needed to knock them down,” Heuring said. “I practice it every day with Coach Johnson, and he makes sure that we make our free throws.”

In a game that was back-and-forth from the second-quarter on, neither the Hornets or Hawks could make consistent stops.

However, despite a game filled with scoring from both sides, Kelly (3-0) did make the most significant stop of the night after forcing Advance’s best player to put-up a difficult attempt.

After the Hornets’ missed a free throw that would have tied the game, once again, they managed to create a second-chance opportunity.

There was only one player that Advance was looking to go-to in a clutch moment — senior Jack Below.

Amid a stellar night, Below drove the lane and was looking to score on a floater to break the tie and give Advance an 84-83 lead. His attempt rimmed out, though, and into the hands of Kelly, as they held on to a one-point advantage.

On the very next possession, junior Jay Noon cut to the rim and scored off an excellent assist to force Advance to make a three-point shot to extend the contest. Kelly would follow that up by creating a turnover on the very next trip down the court.

With not a lot of time to make a decision, the Hornets tried to find an open man in-the-corner, but the pass went out of his reach and rolled out-of-bounds and back into the hands of the Hawks, who were in firm control at that point.

Heuring then sealed the deal after knocking-down two more free throws to make the score 87-82.

Below finished off the game by driving to the rim for a layup to make the score 87-84, leaving Kelly with one thing to do — inbound the ball.

After doing just that, a jubilant Kelly fan section erupted as the Hawks advanced to the Oran Invitational Tournament championship game for the first time since 1998.

In a game of twists and turns, the one thing that Kelly head coach Fred Johnson was happy to come away with a win in a game that could have gone in either team’s favor.

“I was thinking that we had to make some key stops,” Johnson said. “That was the thing. Below was getting that ball and doing exactly what he wanted to do, and we weren’t coming over to help seal. Toward the end, he was passing it a little bit because we were working him so hard, but he’s one heck of a ballplayer. We just got to get better ourselves.”

Below was a problem for Kelly the entire night. He finished with 58 points on 21 of 49 shooting, was 13 of 18 at the free-throw line, and grabbed eight rebounds as well.

Landon Dailey finished with 11 points and three rebounds. The junior shot 4 of 10 from the field.

Kelly spread the wealth on their side, as five players reached double-figures. 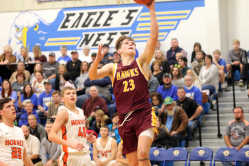 Kelly’s Gavin Jansen (23) lays the ball in against Advance, in the semifinals of the Oran Invitational Tournament, on Thursday, Dec. 5, 2019, at Oran High School, in Oran, Mo.
Alex Wallner/Standard Democrat

Sophomore Gavin Jansen led the team with 27 points on 12 of 23 shooting. He recorded a double-double as well, after gobbling 13 rebounds.

Bryce Morgan was 5 of 15 from the floor for 13 points. The junior had seven rebounds, as well.

Sophomore Joel McClain added 11 points on 5 of 9 shooting, to go along with seven rebounds, to round-out the Hawks’ double-digit scorers. 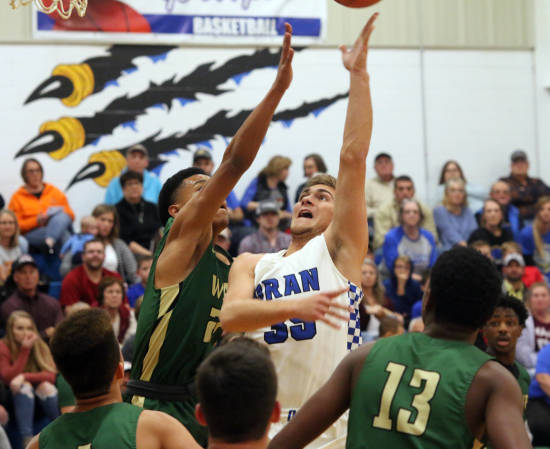 ORAN, Mo. — An aggressive Oran team showed no remorse against Malden in the opening semifinal game of the Oran Invitational Tournament on Thursday.

The Eagles cruised to a 77-34 win over the Green Wave, and three-point shooting wasn’t the main reason why.

Getting to the lane at will was how Oran dictated the game, with senior Todd Priggel leading the way in that regard.

Priggel had 26 points on 12 of 25 shooting, with not one make coming from beyond the free-throw line. The senior used his strength to maneuver his way around defenders and create easy opportunities for himself.

From the start of the game, Priggel was in attack-mode and was something that head coach Joe Shoemaker noticed out of one of his leaders.

“He was able to stay under control with his penetration,” Shoemaker said. “A couple of times early where he missed, he put his head down for a split second, which is something we worked on. He continued to attack the lane and finished well, especially during the middle part of the game.”

Priggel finished with a double-double, with 10 rebounds also.

Ty Johnson added 23 points for Oran, on 8 of 17 shooting, to go along with five rebounds.

Langdon Scheeter also had a strong night, finishing with 11 points on 5 of 13 shooting, while Tyson Goodale rounded-out the double-digit scoring for the Eagles. Goodale finished with 10 points on 5 of 8 shooting as well.

Coy Wade also finished in double-figures, with 10 points. He shot 5 of 16 from the floor and brought down six rebounds.

Oran advances to the championship game for the third-straight season. The Eagles have won the last two Oran Invitational Tournament championships, defeating Advance 66-60 in 2017 and Scott County Central last season, 62-43.