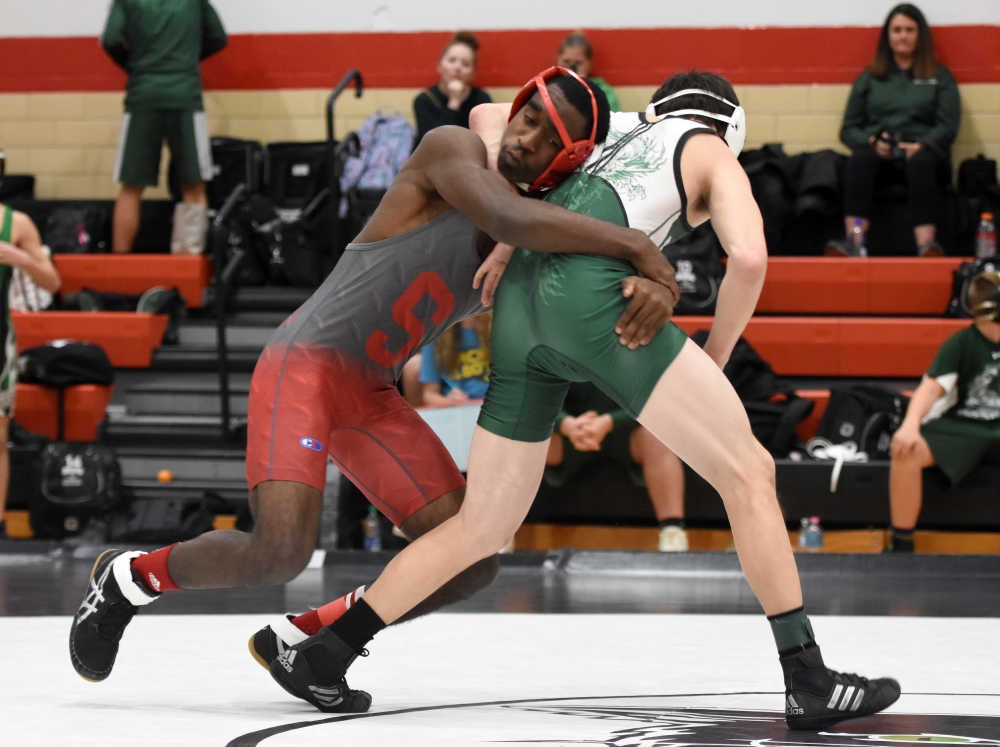 Sikeston’s Jonathan Green (left) gets a hold of his opponent from DeSoto in the 132-pound match, on Tuesday, Dec. 3, 2019, at Dexter High School., Green won by decision, 4-0.
Kyle Smith/Dexter Statesman

CAPE GIRARDEAU, Mo. — Sikeston advanced to the consolation championship game of the Girls SEMO Conference Tournament after a 50-26 win over Kennett on Tuesday.

Drew Irby and Alex Winsor led the team with 14 points each. Brendan Garmon and Joey Chamberlain each had 13, A.J. Hicks finished with 12, and Jabryson Rand 11.

The Bulldogs play at East Prairie next Thursday, with junior varsity starting at 6 p.m. and varsity to follow.

KENNETT, Mo. — The New Madrid County Central wrestling team opened up the season with a pair of wins in a tri-match against Kennett and Notre Dame.

The Eagles defeated Kennett 51-30, and Notre Dame 48-22. There was no other information provided.

DEXTER, Mo. — Sikeston dropped a pair of matches in a tri-match on Tuesday, against DeSoto and Dexter.

In the first match, the Bulldogs fell to DeSoto 46-33.

Jacob Leavitt picked up a win by forfeit, at 106 pounds, while Eddie Foster won in 49 seconds against DeSoto’s Payton DeClue.

Trey Scott and Jonathan Green also picked up wins. Scott won by forfeit, and Green defeated Grant Hearst by a 4-0 decision, at 132 pounds.

Cannon Gaddis also won by forfeit, at 145 pounds, to end the scoring for Sikeston.

In their next match, Sikeston fell to Dexter 42-33.

Gaddis picked up his second victory of the evening, after pinning Dexter’s Jacob Medler at 2:19.

At 152 pounds, Devyn Tinsley defeated Dylan Homan by an 11-7 decision.

Ben Chittenden and Brian Tims each won by pinfall in back-to-back bouts. Chittenden won at 4:11 at 195 pounds, while Tims won at 1:30 in his 220-pound match.

Foster then picked up his second win of the night, by pinning Eric Harmon at 3:33, in a 113-pound match.

DEXTER, Mo. — Cherei Jones picked up a pinfall win over DeSoto’s Lily Kirk during Tuesday’s 36-18 loss to the Dragons.

Jones won in 58 seconds. Kate Grubbs and Lila Eckert also picked up wins, but by forfeit.