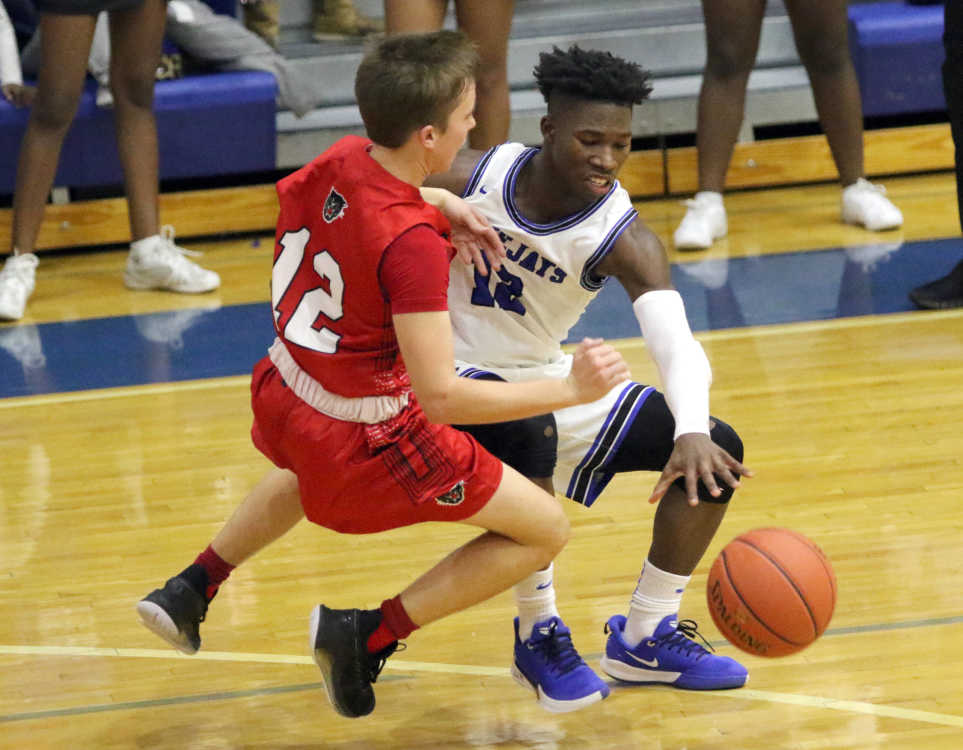 CHARLESTON, Mo. — A pair of early runs set the tone and ended the game reasonably quickly for the Charleston boys basketball team on Monday night.

The Bluejays opened up the game on a quick 10-0 run after senior Sam Bledsoe hit a pair of three-pointers, Blessin Kimble finished at-the-rim, and Brian Visor hit a pair of free throws. That early gap forced Dexter (0-1) to call a timeout, and it didn’t get any better from there, as the Bluejays steamrolled past the Bearcats 76-36 in their home-opener.

Charleston (3-0) eventually grew it’s run to 16-0 before senior Garrett Henson ended it by hitting one of his two free-throw attempts.

No mercy was shown from the third-ranked team in Class 3, as they ended the first quarter leading 20-1. Senior Isaiah Gillespie finished off the quarter with a pair of field goals to make up the total.

Starting the second quarter the same as the first, Charleston used its athleticism, quickness, and efficient shooting to blow the door open again, with a 14-2 run. Bearcats’ junior Andrew Ellinghouse, though, would end the elongated run by the Bluejays that stretched from Gillespie’s two baskets at the end of the first quarter to the 3:21-mark of the second.

A 34-5 lead was more than enough for Charleston to handle, and head coach Danny Farmer knew that Dexter would struggle with the different areas in which Charleston excels.

“Our speed and our press kind of got to them, and that’s what our plan was,” Farmer said. “I think to throw some of their shots off, I saw them some during the summer, and they can shoot it well from the outside. I felt that if they weren’t hitting those shots when they do get a look, then we could take care of business because they would have a difficult time stopping us.”

Three Charleston players finished in double-figures. Bledsoe led the team with 16 points, on 6 of 15 shooting, and 4 of 12 from behind the arc.

Senior Terridean Bogan had 14 points, seven rebounds, and six assists, while Kimble had 12 points. The 6-6 Kimble was 4 of 6 from-the-floor, with four rebounds.

For all three, it has been an excellent showing in their final year at Charleston High School.

Through the first three games, Kimble leads the team with 20.3 points per game, while Bogan averages 17 and Bledsoe 16.6.

“They played well in the two games on Friday and Saturday,” Farmer said. “I thought T and Sam and Blessin played well, and they continued to play well. They’re some good leaders. They’re playing hard and taking every game seriously, and I hope they continue to do that.”

Heading into Monday night, Farmer said that he did have a concern about getting caught off-guard by a team that can get hot and shoots very well.

An upset was not on the Bluejays’ minds, though, as they flexed their muscles from start-to-finish.

“I was concerned about coming off two big wins,” Farmer said. “Coming in and not ready to play. I was telling the guys to let’s go take care of business and let’s jump out and beat them the way we feel we should beat them. Them being the ninth-seed and us being the one-seed in the upcoming tournament. We were concerned about effort tonight, and I thought that the kids played hard.”

Getting off shot attempts wasn’t the problem for Dexter. The Bearcats attempted 32 three-pointers.

Knocking down looks was a struggle, and for head coach Chad Allen, it was a more so his team not playing loose.

“A lot of that was because we were tight,” said Allen on his team’s struggles from the perimeter. “We were missing a lot of perimeter shots, and if you noticed in the second half, we started settling down and started knocking some of those shots down. But, you know, Charleston is just a great team.”