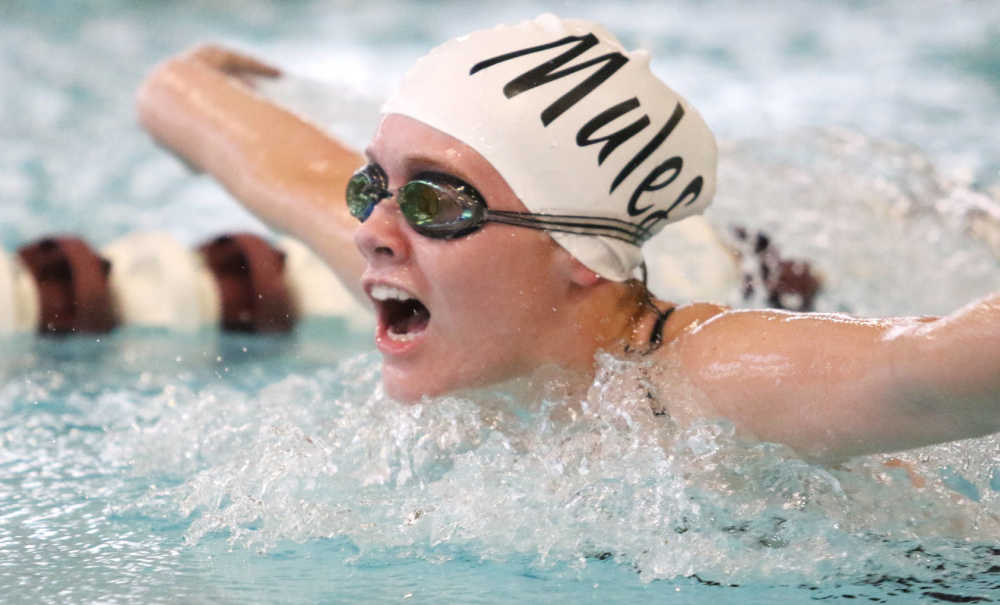 POPLAR BLUFF — In their very first race of the season, the Poplar Bluff swim team got a consideration qualifying time for state, twice.

Both of Poplar Bluff’s 200-freestyle relays also earned a consideration time, as did Bradley in winning the 50-yard freestyle.

“To be honest, it was not expected,” Bradley said. “I’m very excited for what the season will bring, especially with our times today, even our relays.”

The Mules won seven events and took the three-team meet at the Black River Coliseum Aquatic Center with 138 points followed by Notre Dame (115) and Saxony Lutheran (19).

Poplar Bluff’s home pool is notoriously slower but there were 10 personal-best times by the Mules, who travel Saturday to Ladue for an invitational.

“Saturday will either prove or disprove what we did today, which is also pretty exciting for us to see,” Bradley said.

Bradley’s 50-freestyle time of 26.08 seconds is already within a second of her top time last season at the state meet. The senior missed the automatic qualifying standard by just 0.59 of a second.

Bradley also won the 100 butterfly at 1:09.92, already half a second faster than her previous-best time.

Sophomore Julia Smothers won the 500 freestyle in 6:48 while senior Jessica Rush was third.

“That was pretty exciting,” Lewis-Muse said.

Fortner joined Cisne, Bradley and Olivia Kirkman on the 200-freestyle relay that won in 1:52.63. Anders, Rahlmann, Morghyn McCain and Bethany Leighty finished third with a consideration time of 1:59.04. Leighty, Cisne, Fortner and Rahlmann were second in the 400-freestyle relay followed by the Mules relay of Anders, Rush, McCain and Addison Kirkman.

“With the addition of Gabby on the team that’s going to kind of relieve a couple of girls in different spots if we’ve got to use them somewhere else,” Lewis-Muse said.

Cisne finished second in the backstroke as Saxony Lutheran’s Savannah Spencer touched the wall just 1.48 seconds quicker. Cisne’s time of 1:10.72 was her fastest to start a season, Lewis-Muse said, but to qualify for state again she will need to cut nearly 9 seconds.

“She’s a very intelligent swimmer,” Lewis-Muse said of Cisne. “She understands there’s no time to waste.”

Olivia Kirkman finished second in the 200 freestyle at 2:22.93 followed by Leighty in third place. Haven Phelps was third in the 200 IM while Rush placed fifth and Austynn Dover had the fourth-best time.

Gregory touched the wall in 1:09.86 in the 100 freestyle with the second-fastest time out of the first heat.

Moore finished third in the butterfly, cutting 0.41 seconds off her previous-best time for 1:24.58.

“I’m really pleased where we’re at right now,” Lewis-Muse said. “It was exciting to watch.”