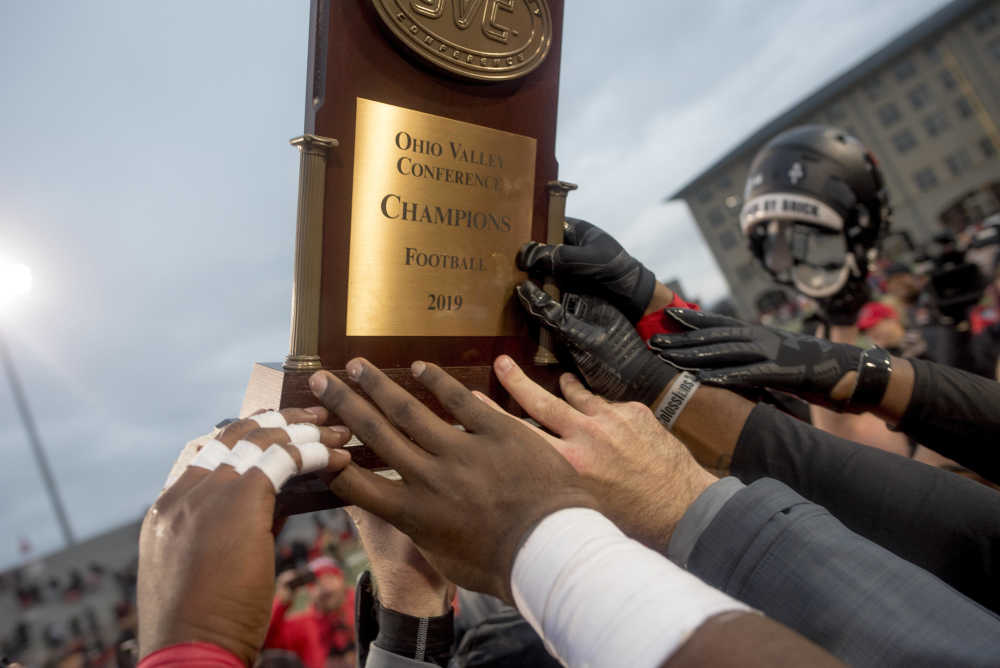 The Southeast Missouri State football players and coaches hoist the Ohio Valley Conference championship plaque after winning a share of the title with a win over Murray State last month at Houck Stadium.
Tyler Graef ~ Southeast Missourian
Order this photo

The Southeast Missouri State football program recently concluded its second consecutive highly-successful season despite its loss to Illinois State in the 2019 FCS Playoff opening round.

“I have this gratitude to (the seniors),” sixth-year Redhawk coach Tom Matukewicz said. “Because they came when we didn’t have any of this stuff. We didn’t have the kind of excitement that we have now.”

Southeast Missouri State had zero margin for error in the final half of the season as it chased Austin Peay for a share of the Ohio Valley Conference championship.

Against Eastern Kentucky, the Redhawks committed five turnovers and fell behind at home 31-14 with just over 10 minutes remaining in the third quarter. However, the defense stiffened and held the Colonels to just 118 total yards in the second half, while running back Zion Custis scored twice and helped Southeast score 24 unanswered points and win 38-31. 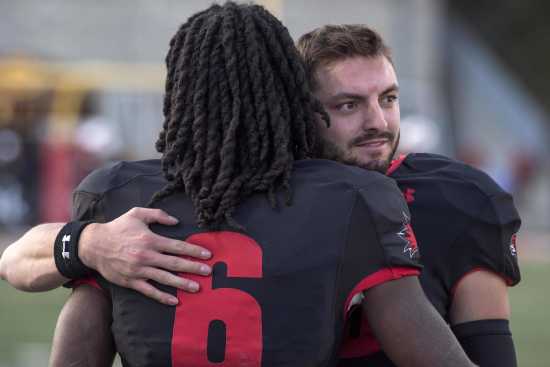 In the regular-season finale against Murray State, fifth-year senior quarterback Daniel Santacaterina threw for three touchdowns to lead the Redhawks to a 31-24 win 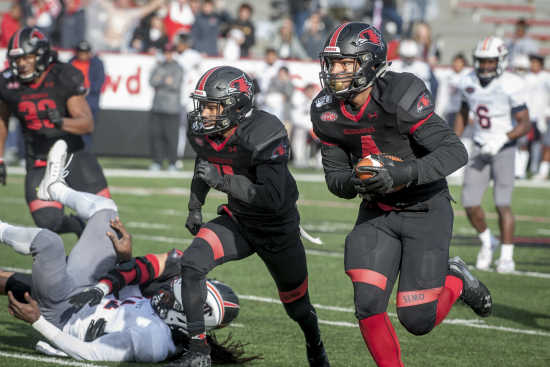 Southeast was entrenched in a 10-10 battle with OVC leader UT Martin at Houck Stadium with just over five minutes remaining when junior linebacker Omardrick Douglas picked off a Skyhawk pass and returned it 32 yards for the game-winning score.

In that victory, the Southeast defense picked off three passes, forced five UT Martin turnovers and blocked a field goal.

The Redhawks held the visitors scoreless in the second half.

The Southeast offense struggled in the opening half and Matukewicz pulled Santacaterina and went with back-up Joe Pyle for the entire second half and overtime.

Pyle ran for a 61-yard score early in the second half.

Tennessee Tech kicked a 51-yard field goal in the final minute to force overtime in its game at Houck Stadium in early October.

The Golden Eagles took a 37-30 lead in the first overtime before Redhawk runner Mark Robinson forced a second overtime with his third touchdown of the game (a 16-yard score).

In the second overtime, the Redhawks gave the ball three consecutive times to runner Custis, who scored from 13 yards out for a 43-37 advantage (the kick failed).

The Southeast defense then stopped Tennessee Tech on its series by sacking the quarterback for a three-yard loss before forcing three incompletions.

“If there is anyone in this locker room feeling bad, shame on you. Shame on you.” 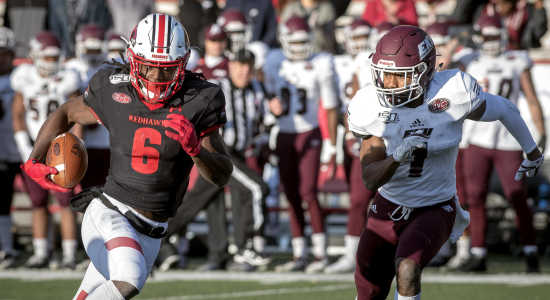 Fifth-year senior wide receiver Kristian Wilkerson was reliable to Santacaterina for each of the past two seasons and the Redhawk fan base could count on him to be entertaining each week, as well.

“He has a weird knack for adjusting to the ball while creating space at the same time,” Santacaterina said of Wilkerson. 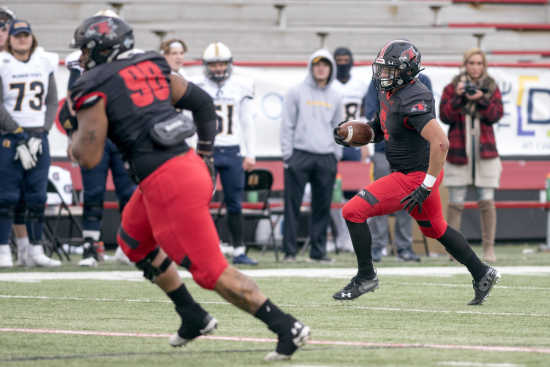 The Redhawks got by Murray State 31-24 to close out the regular season and it was memorable in several ways, but individually, it was a special moment for senior linebacker Zach Hall.

Hall not only led Southeast in tackles that game (10), but he also picked off a pass and zig-zagged his way through the Racers for a 61-yard score.

“His skill range is crazy,” Matukewicz said. “Most guys can only do two of those five things. That is what makes him good. “Obviously he’s got a great processor and (football) instinct. But his range of skill is just awesome.”

4. Another year, another postseason bid

Southeast earned a spot in the 24-team FCS Playoffs for the second consecutive year after beating Murray State and winning for the ninth time in 13 games.

The postseason bid was the third for the Redhawks at the NCAA Division I level. 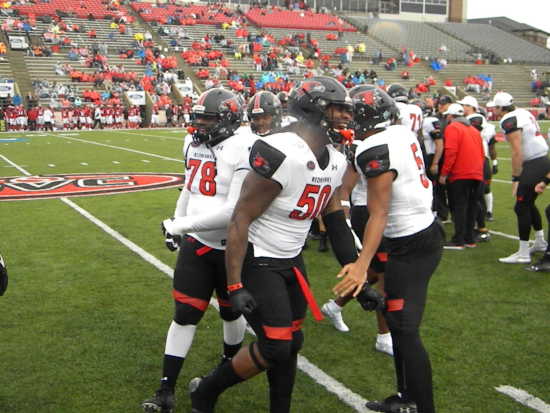 Southeast Missouri State players celebrate late in their victory at Jacksonville State this past season at Gadsden, Ala.
Tom Davis ~ Tdavis@semoball.com

Very rarely does any OVC team beat Jacksonville State and doing so on the Gamecocks’ magnificent home turf is almost incomprehensible.

However, Southeast has ignored a lot of history of late.

One year after ending the Gamecocks’ 36-game conference win streak with a 37-14 win at Houck Stadium, Southeast put an end to Jacksonville State’s 32-game home winning streak with a 24-21 win in October.

“Six years ago,” Matukewicz said after the win, “to say that we would come into their place and beat them is shocking.” 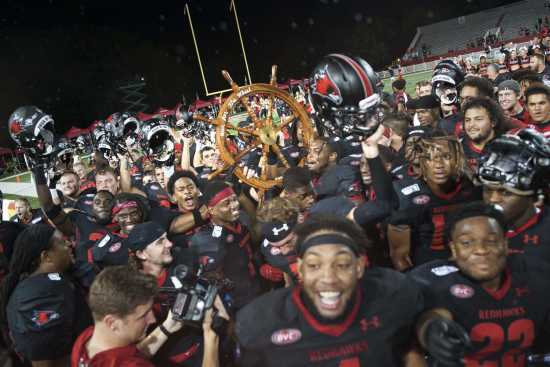 The Redhawks opened the season with a 44-26 dominating win over rival Southern Illinois in front of an overflowing crowd of 8,312 fans, the largest at Houck in a decade.

Santacaterina threw for 248 yards and a pair of scores while running for another.

It was the second consecutive win in the series and allowed the Redhawks to maintain possession of ‘The Wheel’ trophy.

The environment of the night was electric and resonated throughout the city.

“I’m really overwhelmed,” Southeast Director of Athletics Brady Barke said as he watched Redhawk quarterback Daniel Santacaterina scamper in for his second score of the night. “The community really came out. It’s been a really good atmosphere.” 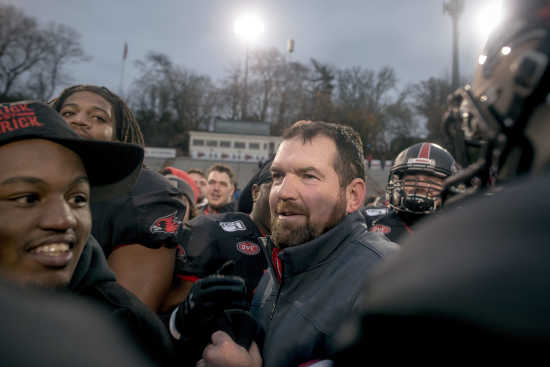 Southeast Missouri State football coach Tom Matukewicz is surrounded by his players following the Redhawks' clinching a share of the Ohio Valley Conference championship with a win over Murray State at Houck Stadium.
Tyler Graef ~ Tgraef@semissourian.com

The regular-season finale win over Murray was memorable for several reasons, none of which were as big as the fact it gave the Redhawks a share of the OVC championship along with Austin Peay.

The victory was the program’s ninth for a second straight season, which had never been done before.

It virtually assured a postseason bid for the second straight season, another first at the NCAA Division I level.

It also was the 13th consecutive home win, which was the longest in the OVC, as well as set a new Redhawk mark at this level.

“The goal was,” Matukewicz said, “was to be more than one winning season. That is what we were last season, we had a great season, but it was just the one season, so people discounted it. What we talked about was being able to do it back to back.

“That is what a legitimate program does. “