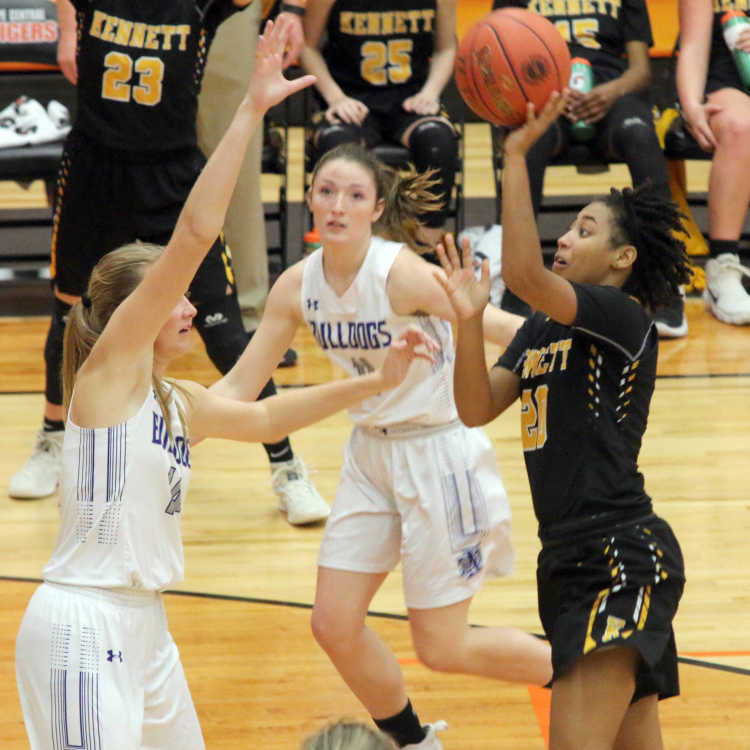 Photo by Alex Wallner, staff
Kennett’s Katara Raiford attempts to shoot against Notre Dame, in the first round of the Girls SEMO Conference Tournament, on Monday, Dec. 2, 2019, at Cape Central High School, in Cape Girardeau, Mo.
Order this photo

Leah Jansen scored seven of her game-high 12 points in the opening quarter as the No. 1 seeded Notre Dame Bulldogs beat No. 8 seeded Kennett 46-25 in a quarterfinal of the SEMO Conference varsity girls basketball tournament Monday at Cape Central High School.

Notre Dame jumped out to a 19-7 lead after one quarter of play. The Bulldogs didn’t allow a field goal in the second quarter as it increased its lead to 25-10 by halftime. Notre Dame also won the third and fourth quarters by single digits.

The Bulldogs (2-0) got nine points each from Delaney Dohogne, Yasmeen Rodgers and Tori Rubel.

Kennett (1-1) was led by nine points from Caroline Patton while Taleigh Harrell added six points, all in the third quarter.

The fifth-seeded Risco Tigers overcame an 8-0 deficit and upset the No. 4 seeded Twin Rivers Royals 60-47 in a quarterfinal of the Bernie Invitational varsity boys basketball tournament Monday.

Parker Watson finished with a team-high 14 points, including three 3-pointers.

The Tigers stretched their lead to 26-17 by halftime, but Twin Rivers twice cut its deficit to five points before Risco answered with a 10-0 run.

The Royals stayed in the hunt of their season opener, slicing their deficit to 46-37 by the start of the final quarter where Risco finished them off with a 9-0 run.

"We took care of the ball much better and shot it better from the outside tonight," Risco coach Brandon Blankinship said. "Any time you can get a win over a Seth McBroom coached team you have to feel proud of your accomplishment.

Campbell took control after a close first half as it beat No. 8 seeded Holcomb 64-39 in its quarterfinal at the Bernie Invitational Monday..

The Camels led 11-7 after one quarter and 29-19 at halftime. Campbell outscored the Hornets 22-3 in the third quarter.